Please note that this game features brief, non-explicit sexual situations, and alludes to both the implied threat of sexual assault, and of it having happened in the past.

In Aloners, the free indie post-apocalyptic visual novel from sonnet009, the last man in the world is pretty surprised when he comes home to find a naked girl passed out in his bed... and as the girl in question, you're pretty shocked yourself since the last thing you remember is the world very distinctly not being a wasteland. You have no idea how you got there, and the fact that decades apparently have passed since your last memory seems impossible, though the fella whose abode you find yourself in, "Trash" by name, at least seems to be inclined to let you stay... as soon as he realizes you're human, anyway. What happened nearly forty years ago? Why can't you remember it? To play, just click to select whatever choice you like when some are presented. You can save and load your game at any time, too. For the most part, your choices are cosmetic, largely there to drive the personality of the protagonist (you!), or to colour the way certain things play out, but still ultimately veering you to where the story wants to take you. In spite of feeling largely "on rails", Aloners is fantastically written with one of the most charming and relatable characters to come around in a long, long time, and more than worth the read for any fans of romance after the end of the world. 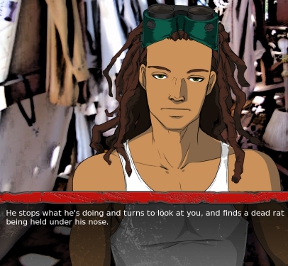 While there are some horror or thriller elements at play, in the beginning, Aloners is more of a slice-of-life story. It's just that this slice-of-life happens to be with an amnesiac and a scavenger after the end of the world in a landscape filled with "muties" and the deadly red cloud. Aloners is about two people thrown together in an impossible circumstance with seemingly nothing in common and the way they react to one another... or rather, the way you react to Trash, which in turn changes his attitude towards you. It helps that Trash is, by and large, a very likable guy. He's a bit rough around the edges, largely because he's used to being by himself for so long, but he's amicable, reliable, and even catches himself when he realizes he was inadvertently being patronizing. The banter between the two of you is funny far more often than not, such as during a chapter that sees the two of you getting on each other's nerves after days confined together, serving as a perfect counterbalance to the more serious moments. Though there is a romantic subplot, the pacing of it is excellent... despite frequent playful flirting, the relationship that develops with Trash feels like it grows naturally, from two people who grow to see each other as equals, and then as friends, and the way the dialogue options let you choose the tone of your responses makes a world of difference in the way you view the protagonist. She is, after all, entirely shaped by you as far as her personality goes, be she blushing, sassy, aggressive, or any combination of those and more, in stark contrast to most visual novels that lump you in with a personality that suits the game, rather than what would suit the player.

The mystery of what happened to you before you showed up in Trash's shack unfolds slowly, initially told in bits of fractured memories, and gradually becoming part of the main focus of the rest of the game. This backstory is interesting in its own way, to be sure, but Aloners just isn't as strong a thriller as it is a romance or character drama, so it's a little disappointing that the latter half of the game is almost solely devoted to that thriller plot. The art is a bit of a mixed bag... Trash is the only person who gets an illustration, and his artwork is great, but so often you're left staring at empty saturated photo scenery while the narrative describes scenes of intense action. This is especially egregious later in the game, and speaking of action, while the story is still engaging, it would have been nice to have more say in it. While you can shape the protagonist's personality, Trash still feels like the one making all the choices and driving the story while you just react to it. It's not that the protagonist never gets to actually do anything, it's that when she does, you feel more like a passive observer because of the limitations of your choices. Despite all that, and the fact that the ending is abrupt and unsatisfying, Aloners is still a cut above the rest thanks to some stellar writing and one of the most likable main characters/love interests in a long, long time. Aloners slings a good story, at times an amazing one, and we can only hope we see more from its creator down the road.

Aloners was spotted at VNs Now!

I almost didn't try this, since you mentioned the word horror, and I Don't Do Horror *At All*, but I'm really glad I did -- to me, this is more action/thriller than horror, not much worse than a James Bond movie.

Thanks for this posting though -- it's a great game so far!

I just finished playing! It's a really great game, with just the right mix of mystery, suspense, thrill and romance. The character of Trash is endearing from the get go and only becomes more multi-faceted as the story continues, as does your own character. This game definitely contains mature themes, but not in an overly explicit way.

Also, thank you josephine17. I'm a total wuss when it comes to horror, but this game didn't have anything to that extreme. I had a few breathless moments, but overall steady game play.

Sorry for any confusion! For the record, you can always post and ask for clarification about ratings or content. It's hard for me to predict what people would want to know about in greater detail, so I can't do it for every game unless someone asks me about something specific. :)

Thank you for taking the time to play and review Aloners. It's encouraging to know what worked for you, and useful to know what didn't. I'll be making my next VN with these things in mind, and aiming to impress!

Thankyou so much for this absolutely beautiful game. I loved every minute including and maybe even especially, all the damn plot twists!!! But there was one thing,

THAT ENDING KILLED ME! (or Trash, to be specific) Excuse me while I go cry in a corner