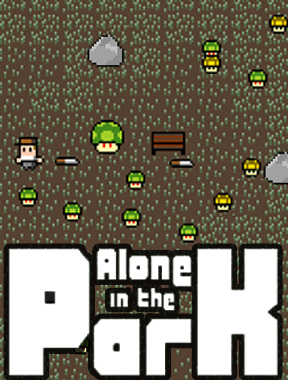 When you think about shooter games, the first words that are likely to pop into your head are: gory, bloody, or hellish, but not cute. At least, not until you've had a look at Amidos and Vartagh's adorable little multidirectional shooter, Alone in the Park, where you play John the Cook, who after a long day at work, closes down his restaurant and decides to take a shortcut through the park. Big mistake. Because, as we all know, walking alone at night in the park is just asking for a purple multidimensional portal to open up and suck you into a parallel universe controlled by evil mushrooms. You were clearly just asking for it.

In more conventional shooters, you'd have your pick of shotguns, ninja stars, or BFGs. But you're just a cook after all, so you'll have to make due with thrown cigarettes and pizza cutters, at least until you've earned enough points to upgrade your weapons. To do this, you're going to have to do a lot of running with [WASD] and shooting with your [arrow] keys. But, because this shooter is anything but conventional, you can run in any direction and shoot in any direction you like at the same time. As an added bonus, the controls are customizable. If [WASD] and [arrow] keys aren't your thing, you have the choice to fire with your mouse and move with [WASD], along with a few more combinations for the true obsessives among us.

Alone in the Park is a fun mix of simple 8-bit presentation with a customizable control scheme, just-right sound effects, and some nice unlockable characters (Notch the Miner!) that will keep your fingers twitching past that first hectic afternoon play through.

Play Alone in the Park

Hey, does anyone know where I can get the music in this game? I'm really into music like that, and its fun to listen to while coding or doing math HW. :D
Thanks!

The weapon upgrade seems pretty weird. Aside from killing grey mushrooms in 2 hits instead of 3, the level 5 weapon is no better than the level 2, which allows you to kill blue mushrooms in one hit. It seems to me that leveling up your gun should actually make the enemies easier to kill.

@jnighlight Mikeal is working on releasing them in an album soon :)

@Regy
Agreed. The weapon level up seemed to give you 1 added point of damage per level. I didn't notice if it increased your damage with special weapons or not. But yeah, the issue is that the enemies level up to the point where +5 damage is inconsequential - it still takes a ton of shots to kill them.

Yeah, you're almost invariably better off upgrading Reload long before Damage unless you chose one of the few characters who has a one-damage basic attack. Damage does magnify through the special weapons though.

However... I can't seem to get the "Die to Laser" unlock to work. I've been killed by lasers several times, but it doesn't seem to trigger. Is it working for anyone else?