It is 20XX! Aliens have invaded Earth! You are the only one who can stop them! So you'd better go stop them! A nostalgic retro run-and-gun platform shooter by Sinclair Strange that hearkens to the 8-bit era, Alien Splatter will have players proving that as dudes, they are more assuredly bad enough. Though they can be changed in the option menu, the default control scheme has you moving with the [arrow keys], jumping with [s] and firing your (initially puny) weapon with [a]. Blast all enemies in your path, pushing forward through the "blocks" in each level leading up to the level boss battles. There are various weapons to collect, from shurikens, to flamethrowers, to the all-mighty spread-shot, along with the usual variety of health and ammo pickups. Get through all 30 areas over six levels, and you'll unlock a special even harder-corer bonus world. 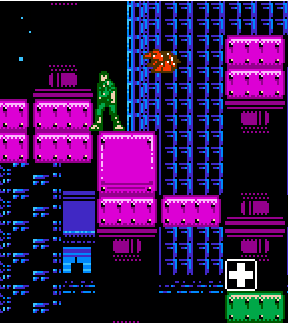 Alien Splatter is a perfect recreation of the NES spirit, with the lifeblood of Contra and Ninja Gaiden flowing through its veins. Its claims of punishing difficulty may be protesting a bit too much (apart from the bottomless pits and limited lives, aspects of the 8-bit experience that always felt more "cheap" than "challenging"), though the difficulty spike in the train level means its no pushover. All in all, Alien Splatter is a quality homage by a developer who clearly loves the genre, and will strike a nostalgic chord in any player with a pixelated heart.

i wanna know on stage four the first block is it bugged or its just me who cant jump over the huge pillar with a mine on top of it just after the last box dropping pipe?
cuz i tried every possible way to pass it and it seems impossible ive been stuck there for more than a day just trying to pass that annoying pillar :(
please any help