Looking at the title of Alexandria Bloodshow, your mind might fly all over the place wondering what genre the game represents. Sounds like a great name for a first person shooter set in ancient Egypt, right? Well, that may be, but in this case, Alexandria Bloodshow is actually a tactical card combat game that succeeds the even more unusually named SAMURAI BLOODSHOW: les vagues blanches, les nuages rouges. Yeah, that's right! Once you put the names aside, though, you'll find a couple of excellent slow-paced strategy games that will remind you of Plants vs. Zombies in some surprising ways. 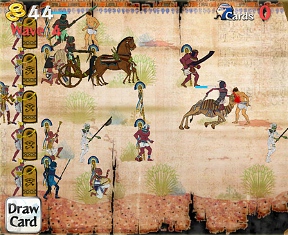 If the sound of a tactical card game makes you want to head for the hills, pause for just a moment and consider this: Alexandria Bloodshow is simple to play, and the complexity only builds up later in the game. By that time you'll be well-equipped to handle it, so you'll never feel overwhelmed, undereducated, or just lost. It's about as casual as a tactical card game can be, and for that alone, it's worth checking out.

Alexandria Bloodshow pits two ancient armies against each other on the field of battle: the Greeks and the Egyptians. By assembling a deck of warrior cards, you'll fight wave after wave of opponents, each of whom is out to capture and kill your king. Tap a card and move it to the playing field to place it, staying aware of the horizontal lines of attack enemies tend to follow (see? Plants vs. Zombies!). Different units have different strengths, so you'll want to spread your forces out and layer them so their attacks can overlap if at all possible. And keep in mind you can level up units by placing cards on top of them. But don't go too overboard, as your deck carries a limited stock of troops!

When everything is in place (or before, depending on how much time you take organizing your troops), the waves begin, with enemies pouring in from the right side of the screen and your fighters meeting them when they're in range. You constantly gain gold in Bloodshow, and gold is used for drawing new lots of cards and for moving units on the screen. Battlefield obstacles often make things more interesting, and the leader of your forces charges a three-tiered ability that can often turn the tides of battle. 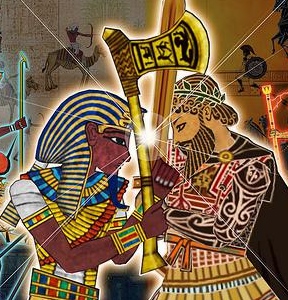 Analysis: Just like its predecessor, Alexandria Bloodshow is full of over-the-top creatures, epic battles (think Greek gods vs. Egyptian gods, or mythological animals, if you like!), and deeply nuanced gameplay that pulls inspiration from a number of sources. It may not have the cuddly critters or pretty colors you find in most mobile games, but the artwork is impressive in its own right, sporting the same paper scroll look culled from SAMURAI BLOODSHOW.

The basics of Alexandria Bloodshow can be learned in just a few minutes, but like any good strategy game, it takes time to master. Building a deck becomes a real challenge once you obtain more units and more cards, a process that takes more time than you'd think. And with 120 different cards to gather, you're in for a serious afternoon of deck management.

The only real downside to Alexandria Bloodshow is its pacing. The game moves along at a sluggish speed, from the slow battles to the oh-so-gradual progression of moving through your chosen campaign, unlocking new cards, and winning battles that are more varied and more difficult. Sure, there are times when you can't make the waves come slow enough, but it takes time to get to that point. The game doesn't try to throw any hooks out there early on to grab more gamers, it simply presents what it's got and lets you make up your mind on your own.

And finally, rounding out the game's set of features, Alexandria Bloodshow comes with several multiplayer modes, both online and local in nature. Assuming you can find an opponent who is interested in intelligent play, this is a great way to extend the game even further, finding some clever opponents to pit your deck against to see which ancient race of card-based folk are the most powerful!

You won't catch the game on grandma's iPhone, but Alexandria Bloodshow is a smart underdog of the mobile strategy game world. It's got lasting appeal, deep tactics, and enough gameplay to keep you fighting for hours on end.

You had me at tactical collectable card game. I am so jealous of this. Android pleeeeeeease.

I have such a weakness for flash CCGs. Kongai, Tyrant, and Necronomicon have been my favorite games for awhile.