Age of Wonder: The Lost Scrolls

Enlightenment isn't easy. Most of the time it can take years of dedication, study, focus, and meditation. Or you can just have the local philosopher lob you a scroll. Yes, that's your job in Flash Chaz and Bitnest Software's Age of Wonder: The Lost Scrolls, also free for iOS and Android, a physics puzzle game involving your little bald wise man bringing the gospel to the masses, one bouncy scroll at a time. Use the mouse to aim and control the power of each throw, sending the scrolls ricocheting this way and that through the sandy, ancient locales. You can also press the [spacebar] to switch to rocks, which are best used for hitting levers to activate doors and platforms. You know, typical ancient stuff. 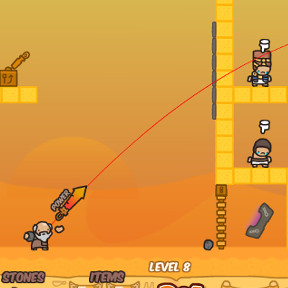 The scroll-flinging is fun in Age of Wonder: The Lost Scrolls but the voice acting and art style are what really set it apart. All your little converts offer hilarious quips about their own ignorant lifestyles while they wait for enlightenment to bonk them on the head. "I can't read. Gimme a scroll anyway?" squeaks one citizen. It's pure goof in the best possible way. There is one downside though... it is a bit on the easy side, especially since the trajectory of each scroll is clearly designated by a red line extending from your little old man all the way across the screen. This means you know exactly where each scroll with fly. The power meter is also too easy to control, involving a timing mechanic like in many launch games would have ramped up the difficulty very satisfactorily. But the game throws some fun curveballs at you, like teleporters and closing doors, so it's not all a walk in the park. In Age of Wonder: The Lost Scrolls, enlightenment doesn't require a lifetime of study, just some good aim and a little determination. Check it out.

After playing thousands of violent video games, it truly is funny to hear things like "Knowledge is power! I want power!"