Ready to sail the seven skies, engaging in honorable combat in your battered but serviceable airship? You'll do just that in Cliffhanger Productions' new turn-based strategy game, Ærena: Clash of Champions, currently playable in early access Alpha on Steam, and available on your computer and to play cross-platform on your Android device, with iOS support coming soon! Artistically a mashup of steampunk and WWII pinup art, the story drops you into a world of noble battle between sky pirates. In many ways, it plays like a steampunk chess game, if chess had bombs and rocket launchers (which, face it, we'd all love to see). Like all turn-based RPGs, you choose your team, in this case, the crew for your airship, and as you level up and earn coin, you can hire new crew members, purchase bomb packs, and even upgrade to a better ship. Once you enter battle, you place three of your team members on the board and move them to attack either the opponents on the board or the rival ship itself. 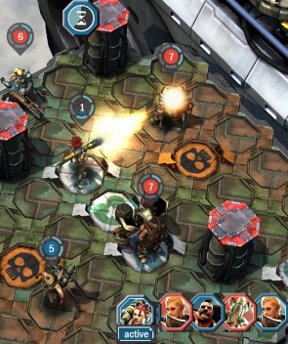 At the heart of the game is the Æther, a substance your team needs for battle, and which your ship can use for support. Each crew member has his or her own special skills and weapons. While none of these items can be leveled up over time, Æther provides crew members with additional abilities, as well as allowing your ship to shoot shells at the opposing crew and ship. Shells can heal as well as deal damage, and new abilities can provide tactical advantages.

As the name implies, this game is all about one-on-one encounters. You can choose to gain experience and dollars in the practice arena, or challenge other players in league play. There's also a timer-controlled shell generator and an in-game shop which uses the cash you earned to purchase more of whatever you need, from crew to bombs. 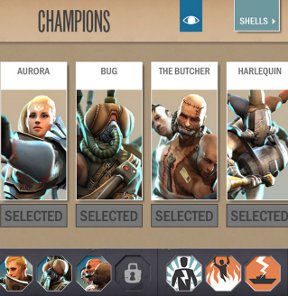 Analysis: This game doesn't set out to turn the genre on its head. It is simple to pick up, and has few surprises in the way of gameplay. The tutorial offers very little direction, as experienced players will be able to pick the game up easily. For each move, your maneuver and attack areas are plotted for you. But don't imagine for a moment that the simple straightforwardness of this game means that it lacks intensity.

The depth of strategy in each battle is impressive. Like chess pieces, each crew member has a standard move/attack pattern, but these can change with the use of Æther, both yours and your opponent's. Æther can change where a crew member moves, how many points they hit for, what kind of attack they mount, and even where on the board a rival crew member might end up. Differing boards increase the intricacy by placing tiles which can help or harm: up the Æther for a player or a ship, or burn or even kill a crew member. Plays need to be planned in advance, but each one is timed, often forcing you to make a choice before there's time to consider all of the ramifications.

There's a lot to love in this game, so it's worth mentioning why it has received a yellow rating. Remember the early comparison to pinups? While the overall 1940s aesthetic is gorgeous, the partial nudity and provocative poses of the pinups seems out of place in the game... especially when the female crew members have a powerful Rosie the Riveter vibe which immediately caught our attention.

Fortunately, while it's important to mention, our reservations about the artwork are not enough to detract from an otherwise brilliant strategy game that will provide you hours of inventive and entertaining cross-platform gameplay. Early purchasers will get to participate in the ongoing development of the game, though you will have to be aware that character wipes will come as the team tweaks and improves the game, so don't get too attached to your party just yet. So hoist the steam crane and set your airsails for the Ærena of your steampunk dreams!

Android:
Get the full version

About the wipe: the wipe on April 3rd will probably be the last one so: go go go ;)

We ain't afraid of no wipe! ha! I'm actually excited to see what happens as the game moves forward.

Thanks, we are also excited about the upcoming updates :)

We thought a long time about how sexy our pinups should be and we tried to do them like actual pinups from 1940 - 1950.
We will definitely keep up with creating a variety of interesting meaningful female champions :)

I appreciate that you're open to discussing it, and actually giving it so much thought. If you want to err on the side of less skin next time, I won't be sorry! :D

What time does the wipe take place tomorrow? Is it a major update, ie, will there be noticeable changes?