Based on the Defoe classic, Adventures of Robinson Crusoe is a game that straddles the now-familiar gap between hidden object and adventure genres. Young Robinson Crusoe was born to a merchant in the mid 1600s, but his heart belonged to the sea. After years of traveling the oceans, a storm ravages his vessel, stranding him on a deserted beach. His ship seems mostly intact, so Crusoe boards it in the hopes of finding food, supplies, and any surviving shipmates. It's your job to help the boy stay alive and repair the ship so he can find his way home. 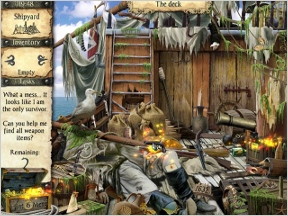 Gameplay consists of the standard list of items alongside scenes filled with objects, your lone cursor tasked with hunting down the missing items. There are also a number of mini-games to be found (many of which can be skipped) along with some light inventory puzzles. Some scenes begin with a surprisingly fun "generic" item hunt where you are given goals such as "find all the mousetraps" or "locate 15 starfish". For some reason this out-of-the-norm thinking really livened up the game.

Each scene contains a number of sparkling hotspots that represent puzzles to be solved (which usually relate to blue items in your list) or sub-scenes you can explore. The first of these puzzles requests you find a "black seagull", though the only seagull on the screen is white. The solution? Grab a stick leaning against the ship, rub it inside the cannon to cover it in powder, then use it on the seagull to turn it black. Most inventory puzzles aren't as creative, but this one really sets the tone to get your mind wandering in later levels.

One nice inclusion in this game is the ability to play in one of two modes: Relaxed or Survivor. The former offers time-unlimited play and supplies you with ten hints to help you find those impossible items. Survivor mode cuts the hint roster down and times your game, but it really doesn't add to the challenge that much. Stick with Relaxed unless you really want to race against the clock. 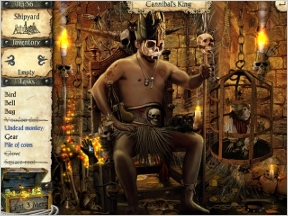 Analysis: When you base your casual game on a classic tale, you'd better get at least two things right: story, and atmosphere. Adventures of Robinson Crusoe happens to do just that, providing ample audio and visual appeal while delivering a rather faithful interpretation of the Defoe novel that will delight fans of the book without alienating anyone who hasn't read it.

On the down side of things, Adventures of Robinson Crusoe is a rather short game, consisting of six chapters that will take you just over half as many hours to complete. The locations are varied, including a forest, temple, swamp and more, but you'll blaze through at such a speed you'll barely have time to take in the scenery.

disappointing! downloaded the demo, cannot get past the black seagull, even though I have used the hints! I shall not be purchasing this one!!

Did you pay close attention to the tutorial and now it does not work? Or did you skip by accident the tutorial?

If it is the second, than here is help:

Please also have a look at the
Screenshot

I'm stuck trying to get the second skeleton head. Do I have to catch the head when it is above the rest of the skeleton? Or can I spear it with the tip inside the rib cage? I am sooo frustrated, I have been stuck at this spot for an hour! Guess having MS doesn't help.

Thanks for any advice you can give Kayleigh

# Click the stone, which is located right down, having two red stripes
# Its going into your inventory
# Get it out and place it on the round stone at the lower left, right next to the stoneface
#The skull will appear at the top of the skeleton at the left side and you can click it easily
For all exact positions please have a look at the Screenshot

There is a rock you can pick up and place to keep the skull up so you can grab it.

i am stuck trying to find the sharp sickle to cut the monkey out of the cage so i can finish that level. pls help

# Hold the chain on the left side with pressed left mouse button. It will lift the cage on the right.
# Wait, till the cage is really at the top and does not move anymor. At the wall underneath the cage, you now see the sickle
# You have to be fast by clicking the sickle, because as soon as you do not hold the chain anymore, the cage will go down again
# With the sickle you free the monkey
# Don't forget to click the monkey after, to get it off your list
See also Screenshot

I'm trying to light the candle to go down the well on the edge of robinson's village. Any help would be great, thanx

Click the well and then, in the pop-up window, that appears. Click the candle at the rope in the middle of the well

Graphics and puzzles were wonderful, but it is a disappointingly short game. Completed in just under 3 hours. Probably would not buy again if i knew how short it was going to be.

I am stuck on the coal and map puzzle and the one drawing the bees away with the fruit. Any suggestions. I just can't figure what I am suppose to do for these two puzzles.

I am so stuck, I'm in the Old Goat Cave and need to build a broken dragon egg. But all I have for inventory is a spear head that is doing nothing. I have been here for over an hour and have already clocked out 1. Please give me some direction.
Thanks

I am stuck in the farmers garden.
I am trying to retrieve the honey
I have the watermellon slice and the nail but they do not seem to do anything

I am at the swinging skeleton and cannot figure out what to do with it. I need a ladder and a nut and have nothing in my inventory. Hints shows the Hat on the skeleton, but nothing seems to happen with it. What now??
twqk39

I am so stuck, I'm in the Old Goat Cave and need to build a broken dragon egg. But all I have for inventory is a spear head that is doing nothing. I have been here for over an hour and have already lost time. Please help!!
Thanks

[Edit: Use the spear head once at the dragon egg nest. It tells you, that you better should look for a non broken egg. Now use the spear head and click in the sand in the lower right part of the scene, right from the skeleton skull, left from the mole. In this area you will find the egg in the sand. Don't forget to click it without the spear head, after you've found it. Greetings, Kayleigh]

To get the bees away from the hive -

stuck on beehive, can't get bees to follow watermelon, makes this game disappointing

I'm stuck with the coal and the piece of map in the Fool Thief part of the enchanted forest . Can anyone help?

I am stuck in the beginning on the ship. On the lower deck I am suppose to find wood for the dynomite but I cannot find it. I have the matches but no wood.

Please read the spoiler above. You have to do very slowly and carefully, then it should work

You do not have to find wood. Light the match at the lantern on top of the scene. With the lighted match you light the dynamite, which is laying on a crate next to the wooden wall at the left side of the scene

The Coal and the piece of paper.
The coal is on the ground by the guys foot and the paper is in the bag. pick up the coal. Then click on the paper and it will open. grab the coal and rub it on the paper.

stuck on the flower path is killing me

Hello, is anyone out there able to assist me with this farmer in distress? I have a nail and a chunk of melon, but how does one get rid of the nail... to enable me to use the melon to lure away the B E E S?? I am "stumped", not being able to work out how to proceed.

On a lighter note, this game of Robinson Crusoe has many endearing qualities!

Thanks for any hints or tips on how to "get on".

Anyone found the rooster in the sunflower scene???

Please Help!! I am stuck trying to figure out the jugs full of milk. How do I get two jugs with just 4 liters of milk in them. Any suggestions would be great. Thanks.

This game is cool , but too hard for a person with a physical disability, such as myself. I am unable to free the monkey from the cage because I am not able to move fast enough to click on the sickle. Very disappointed that I most likely will not be able to finish the game because of this!!

Can anyone help me? I can not find the nail and the chest piece in the lower deck of the ship. I have used all the hints so they can't help. Thank you

This is a very cool game but can be frustrating. I am in the Canibal King's cave looking for a voodoo doll. I have spend a couple of hours now and am out of hints. I guess the best thing to do is start the level over and save more hints for this part of the game.

Please help me with this one I've been stuck on this stage for weeks and just cannot figure it out its frustrating me where do I put the nail and how do I get the bees to stay away from the hive please can anybody help me?