Through rain or snow or bandits and magical grass ogress, the mail will get through in Adventure Xpress, a free match-3 turn-based puzzle game with light RPG elements from Adult Swim and PikPok. You play a brave courier tasked with delivering mail across the kingdom, which is more hazardous than it sounds with brigands and monsters lurking absolutely everywhere and waiting to beat you up for it. As you traipse across the map, at each location you'll have to handle a series of battles before you move on. You fight your opponent by matching coloured runes on the grid between you, and you deal damage when you make matches of three or more, though you can move runes without making matches. The colours represent corresponding elements, and as you might expect, enemies can be weak or strong against elements of different types. If a location has more than one battle, you won't be healed between fights, so you'll need to make sure you're maximizing your attacks by making combos whenever possible! As you fight, you'll gain experience and level up, which unlocks new equipment like weapons and armor for you to buy with the gold you earn, as well as spells that can be powered up when matching the appropriate runes during battles. 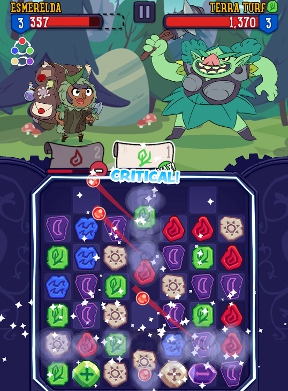 While a lot of Adventure Xpress' elements will be familiar to anyone who's played a match-3 RPG game, including the one that rhymes with Smandy Smush Baga, the fantastic style and quick pace of the battles makes Adventure Xpress a very easy and initially compelling little game to pick up. Runes that explode or eliminate lines help you combat those that are frozen or locked in place by enemies, and setting up powerful cascading combos is satisfying as all get-out in addition to being vital in multiple battles. While you can purchase more Stamps, used to unlock items early or continue a failed battle, with real money via in-app purchases, it never feels necessary, or even pushed. The downside, unfortunately, is that Adventure Xpress gets repetitive very, very quickly. You'll fight the same enemies over and over and over, with no real variation to their abilities to keep you on your toes for a long time, and the letters, which are only a line or two long at most, just don't pop up frequently enough to provide any real incentive. I shouldn't have to bonk, stab, and grind my way through eleven stages just to see the kingly equivalent of "nah, brah, I'm good" as a reward. It's a missed opportunity, since the off-kilter style and tongue-in cheek sense of humour is a huge part of the game's appeal, and it would win you over so much faster, and for so much longer, if there was more of it to break up the pattern of fights.

As a result, Adventure Xpress is a game with solid bones, but feels like something that needs a bit more flesh wrapped around it to really take it from cute and quirky distraction to unputdownable free time devourer of all it touches. Things do start to liven up once the game becomes more challenging past the first area, dropping in more board obstacles and offering up equipment with abilities like healing at the cost of lowered overall health. Adventure Xpress looks great and plays beautifully, with just enough complexity to its runes to make managing the board important in long battles, without ever becoming something that just about anyone couldn't pick up. If you already love the genre, Adventure Xpress is a fine addition to it, with a light-hearted premise and stylish artwork that makes it a winner despite its issues.