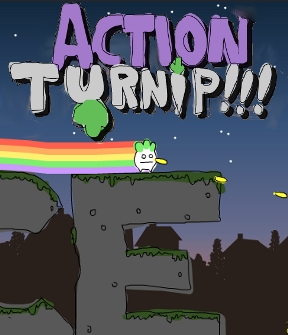 The "run right and jump" genre has been around about as long as gaming. Many people's first encounter with the concept was Super Mario 3 on the NES, or maybe Sonic the Hedgehog on Genesis. Since then there have been some advances, particularly in the case of Semi Secret's Canabalt. It wowed players with its minimalist retro style, and kept them nodding with the catchy score.

Raitendo's Action Turnip!!! definitely knows its roots. It has two modes: Run N' Gun mode, which is an interesting cross between Robot Unicorn Attack and shmups, and Turnabalt mode, which is like what you'd get if Canabalt and a movie's credit sequence had a baby. Except you can turn into a rainbow and fly around.

If that sounds fun, chances are you'll like Action Turnip!!!. A lot of this game's charm is in its presentation; in Run N' Gun mode, you use [WASD] or the [arrow] keys and [IJKL] or the mouse to move and shoot, respectively. You'll be blasting eyeball bats and armadillos while avoiding gaps and obstacles, all of which are rendered in a sketchy Doodle Jump/MS Paint Adventures style. It's a lot of fun to watch or play. It's possible to collect powerups which give you a double-jump, let you shoot Star Wars-esque rings, and other powers. In a neat twist, getting kill combos or other accomplishments results in the message literally changing the ground beneath your turnip feet: before long, you'll be hopping between the letters of NICE COMBO and RAITENDO like the best of them.

Turnabalt mode is simple, yet familiar. Like Canabalt, you run forward at a set rate, using one button to jump. Once in a while you'll hit a rainbow, which changes the background and lets you fly along on a wavy rainbow beam. This mode seems tacked on: although the ability to double-jump is nice, the obstacles which add dynamism to Canabalt are absent. Chasing better high scores is fun at first, but grows old quickly.

Overall, Action Turnip!!! is a produce-fresh take on the genre. Although it isn't revolutionary, it's still a lot of fun to play. Whether you're new to the world of side-scrolling runners or a jaded pro, Action Turnip!!! will give you a fun time.

So if you die during the tutorial ... you can never view the rest of it. Am I missing something?

The part that you already watched won't appear again, but the rest will. If you refresh the page, you'll see all the instructions again though.

It will tell you the rest of the tutorial if you die in the middle of it.

None of the contols work on my computer, he just starts jumping continuonsly or walks really slowly and i cant make him stop!
This game is wierd.

@me
Are you using IE8? The person who made it said it has sticky key difficulties with IE8.

If the controls don't work properly for you, try and play it on Newgrounds instead, it's Kongregate's chat window that sometimes causes a bug in IE8. (just google newgrounds+action turnip)

"Since then there have been some advances, particularly in the case of Semi Secret's Canabalt."
I beg to differ. Are you saying that this or even Canabalt is better than the original Sonic the Hedgehog? Pardon me while I laugh uncontrollably.

No, that's not what he's saying.