Phoenix Wright is back, and he's in HD! After months of waiting Capcom has finally released Ace Attorney: Phoenix Wright Trilogy HD, packing three Phoenix Wright games into a single, easy-to-get-hooked-on download. It doesn't matter if you've never heard of the series or are a tried and true fan, Ace Attorney offers a lot of story and a lot of suspense in a very attractive package. 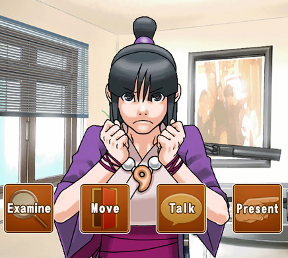 Ace Attorney features the three original Phoenix Wright game along with Justice for All and Trials and Tribulations, sequels that continue the series' tradition of courtroom/detective mysteries. Each game presents you with a case that's going to court, allowing you to do some detective work as you interrogate witnesses and scrounge for evidence, all in preparation for bringing it before the judge so you can set the record straight. Each mystery is just as intriguing as it is exciting, and you can expect plenty of surprises and moments of awkward humor as well. Plus, there's no beating the feeling of screaming OBJECTION! in the courtroom after you've gathered all the information yourself.

Analysis: The Phoenix Wright series has a well-deserved reputation for clever writing that walks the line between serious drama and fine comedy. None of that has been changed, and the games are every bit as good as they were when they were first released. The HD visuals look fantastic on iPhone and iPad screens, of course, and you can even rotate your device to switch between classic two screen layout or full single screen experience. Either way, touch controls are great for a game like this. 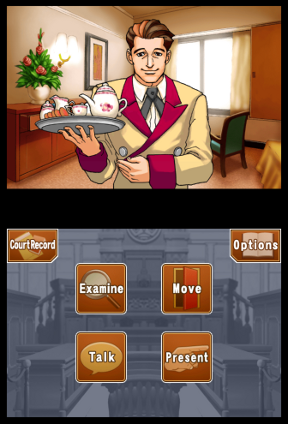 Out of the five chapters found in the first game, the first two are available for free. That's plenty of Phoenix Wright to get you hooked on the series. The rest of that game can be unlocked for $5.99, while Justice for All and Trials and Tribulations are available for $6.99 apiece. There's also the option to just go ahead and buy everything at a discount, which you'll probably end up doing once you remember this is Phoenix Wright.

The only downside to speak of is the game's interface. When you're actually in one of the Phoenix Wright games everything runs just fine, if a touch on the slow side. But navigating between chapters or using the purchase menu is a bit of a hassle. Sliding windows around borders on laborious, and the nav arrows that should make things smoother feel like they're stuck in molasses. A snappier text-only interface would almost be preferred.

Ace Attorney: Phoenix Wright Trilogy HD really is one of those must-get games for mobile devices. You can't go wrong with any of these games in their original incarnations, so when you multiply that by three and add in a non-web version of everybody objects, well, who are we to, you know, object?

I'd also like to point out that one of the first things that pops up in the game is the "Restore your purchases?" prompt, neatly allaying my fears about having to re-buy episodes on different devices.