Abyss: The Wraiths of Eden

Exploring a ravaged underwater utopia sounds like a great idea, right? No? But, think of all the interesting structures, the possessions that were once owned by people slowly rusting away, the great chance of seeing a shark and getting a great picture! Oh, and there are some sinister hooded figures that seem to enjoy causing havoc and destruction and may possibly have intentions to kill you, but that's such a small nuisance. I'm sure you wouldn't even notice it! For the daring protagonist in Abyss: The Wraiths of Eden, the new hidden object puzzle adventure horror game from Artifex Mundi, it's probably a bigger nuisance than she anticipated. 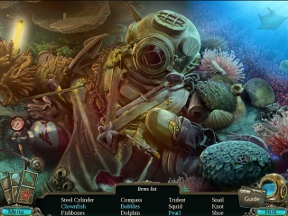 Oh the things we do for love. Famous explorer Robert Marceau has gone missing while on a diving mission and the coast guard has concluded he's more than likely dead. That doesn't matter for his fiancée who isn't willing to give up hope and takes it upon herself to go to the dive site and find him. What she doesn't anticipate is that she's about to stumble upon a ruined city in the ocean depths. This crumbling metropolis is not only beautiful but hiding a frightening evil that she is, at first, blissfully unaware of. As you lead her through the decimated city you will encounter the shiver inducing Legates and the Revolution that is taking place.

After choosing which difficulty you want (casual, advanced mode, and expert, each of which affects hint/skip recharge rates during play) you start your journey in the deep blue sea. Within your environment are several items that will assist you in your submerged quest, along with an indicative cursor that will help you follow the objectives that you must complete. You will encounter a sprinkling of hidden object scenes and puzzles, but the emphasis is on the adventuring. If you would prefer to not do the hidden object scene you can change it to a dominoes mini-game instead, which is a nice touch. To further spice up the fun of the game, achievements are available for a variety of swift solving skills and super sleuthing! 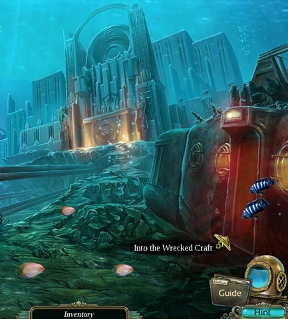 Analysis: Artifex Mundi, since breaking onto the casual game scene, has proven they know how to spin a yarn. While there are plenty of games in the hidden object genre that leave a player feeling cheated of an original (or at least well told) story, Abyss is not afflicted with the same lack of substance. There is only one area within the game that could be improved. Fixing the speech animations would be nice because the words don't seem to pair well with the motion of the lips as well as they should. Also, if you're not a fan of jump scares and shivers down your spine then this gem may not be quite right for you, but this is not a detraction from the game so much as a buyer beware announcement.

Abyss is balanced out well between an enthralling story line, lush scenery, and spooky scenes that encourage a sense of unease and anxiety to hurry for time may be shorter than you think to save your beloved. For a standard edition game, Abyss packs a wallop and provides several hours of stimulating gameplay. At no point is the game overwhelmed by hidden object scenes or puzzles, which is a great change of pace considering many games rely far too heavily on repetitive hidden object scenes. The voice acting is pleasantly believable and the story line is easy to follow as well as greatly crafted. In short, Abyss: The Wraiths of Eden is well worth every penny spent on it and a great play for any fan of excellent storytelling and stunning graphics.

Abyss: The Wraiths of Eden
(Android)

I was curious on what others thought of this Artifex Mundi game (this is my favorite so far) and am not at all displeased with your review. The only thing I wanted to point out is that the voice acting doesn't match the animation because the developers are Polish. The voices match up much better when taking that into account.

Interesting concept. Game play was a little sticky, probably due to the low cpu or ram on the device I was using. Again like other games it was not quite intriguing enough to make me want to play further. Also I was looking for more of a hidden object game where you find items in a scene, so wasn't what I was looking for. This game seems okay.