Chris Jeff and NCH Productions team up for the cavalcade of ridiculousness that is puzzle platformer Above Average Guy, a game where you find yourself abducted and forced to compete on the titular game show, an allegedly Japanese event involving pools of acid, walls of spikes, disappearing/reappearing platforms, and much, much more. Sort of a lethal version of the late (great) Unbeatable Banzuki meets America's Wipeout, only with more goofy headgear. Across 43 levels, use [WASD] or the [arrow] keys to get to the exit, but a hop, skip and a jump will only get you so far. Sometimes you might have to type something to get by, while others will have you use your mouse to interact with the environment, and it's up to you to figure out when and how by experimenting... or clicking on the announcer for hints! Just don't lose all of your audience. 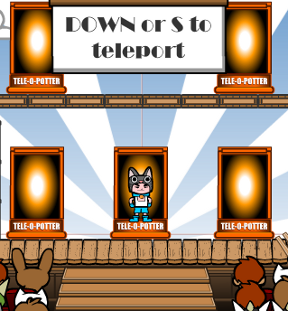 With its myriad of puzzle mechanics, Above Average Guy is a great idea... it just doesn't quite nail the landing. It's a better puzzle game than it is a platformer, with movement feeling almost overly responsive in some cases, and the levels that ask you to figure things out are far more interesting than the ones that are simply a matter of timing and reflexes. The rapid-fire level progression and each stage's size actually works in the game's favour, keeping things moving at a brisk pace, and the bizarro humour and bright artwork, combined with some of the more creative puzzles, make Above Average Guy stand out from the pack. It would be nice to see a sequel that was entirely devoted to some of the more "think outside the box"-y mechanics tried out here, but as it stands, Above Average Guy is still an inventive and weird little puzzler with some neat ideas that's worth a play despite its slip-ups.

Couldn't agree more with the review. It was fun for a while, but then it dragged on to the point where I cannot be bothered to try and solve the puzzles anymore because it's either repetitive or "too imaginative", i.e. not enjoyable to guess the level's intentions.

If there were less levels but greater overall quality, this game would have been "above average".

Has anyone beat it yet? I'm stuck on the last level.

You need to look into the rating system. I have now twice tried to rate the game, but both times the "votes cast" went from 36 to 15, and when I refreshed it was back to 15.

Hi ThemePark. What browser are you using? Can you verify that you're on our new server? (IE, do you see today's new articles.) These things will help us check any issues. I just rated the game with no issues myself.

Hmm, it seems to be an Opera issue since I just voted using Firefox, and the second time I tried it I got the expected dialogue box. The Opera version is 12.16, since I don't want to upgrade Opera and lose most of the functionality that has been taken out of the later versions. But either way, it works fine in Firefox, so it's all good.

Okay, thank you for letting us know. :)

For the last level,

Use the B key to place bombs next to the cannons (timing is important) and jump over the swords. You need to hit him four times.