Able Black hates his Mother, but this puzzle-based, narrative-driven experience for iOS by Scott Leach isn't your average tale of teenage rebellion. Able's an android, but currently he's languishing away in the dark loneliness of Ark 19, an underground habitat created to save humanity from destruction. To avoid being shut down like so many that came before him, Able must take and pass the Citizenship Exam... but what is humanity, anyway? Why is one thing considered alive, and another isn't? Told through a series of chapters interspersed with puzzles, Able Black is a short but thoughtful story with an elegant presentation and an engrossing mood. 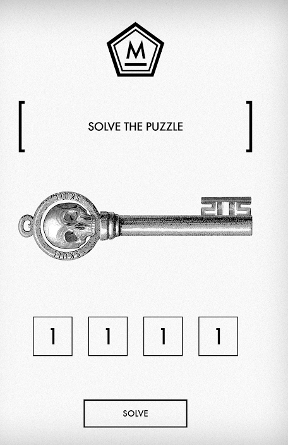 For the most part, playing Able Black comes down to reading each new chapter as you uncover it, which is done by solving the puzzles you're presented. Just swipe to scroll through the text, and tap or tap and hold on buttons to make choices. Some of the questions posed to Able revolve around examining your psychological reaction to certain images or themes, simply done by tapping on whichever option you prefer. The puzzles are often presented starkly and with little instruction beyond you needing to solve them. These can be quite clever as you ponder any text onscreen, or pick apart an image to try to see what clues it holds if you can look at it the right way. Some of these are more intuitive than others, since figuring out how a cryptic image or statement is meant to be used to solve a puzzle without instructions gets frustrating when the only input you get back for an incorrect answer is a buzzer. Playing on lower difficulties nets you some (debateably) helpful hints, but the flow of the story is so pleasant that getting stonewalled by a vague puzzle is jarring. One puzzle actually had me standing in front of a mirror, holding up my iPad and scowling at my reflection as I tried to work out what I was seeing into information that could be put into the game. When I figured out what, exactly, it was the game wanted from me, well... I was a little impressed, but still frustrated. It's a weird balance of breaking the fourth wall and logic that can result in creative puzzles as often as it does complete and utter bafflement.

It's a minimalistic approach that makes Able Black feel sparse in an appealing way, all clean lines and striking imagery, though some may prefer if the game had more of an emphasis on actual gameplay over text. A lot of your time is spent simply reading, and while the story is actually very well written, it serves to underscore how little control we actually have over Able. Which, I suppose, is sort of the point. People have been telling stories about androids and what it means to be humans for years, one of the most famous (and arguably well done) ones being the episode "The Measure of a Man" in Star Trek: The Next Generation, but there's always room for more, especially when they're as well told as this. Able Black's use of sound and subtle animation crafts an atmosphere that pulls you in for the duration... which is likely only to be an afternoon or so for most players given the game's five chapter length. Able Black might be a little predictable in some areas, and awkward in others, but as an interactive storytelling experience, it's definitely worth a read somewhere quiet and contemplative.

Great story, way too short for its price.

It is on the short side, though there is a "substantial content update" coming later this month, and I'll be excited to see what's in that. :)

May want to remove the "free" tag

When did "android who hates his mother" become a genre?

Will there be an android version of Able Black?