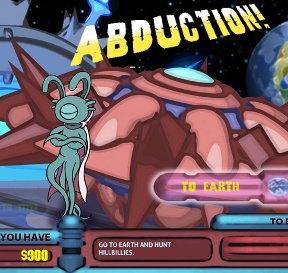 They're feeling the pinch all across the galaxy as intergalactic corporations are forced to tighten their belts around their vast, putrescent midsections to make ends meet. But don't feel sorry for them just yet, since the solution is the tasty treat known as Man-in-a-Can. In Abduction!, the goal is to make your bloated overlords cold, hard cash by journeying to Earth and picking up a few (un)willing volunteers to be the supply for your demand. It's the perfect game for those of you who hate overalls and straw hats, and believe anyone who wears them should be punished.

There are two control schemes available to select from the main screen: plain ol' keyboard, or keyboard and mouse. While the keyboard on its own feels awkward, it is an option for those of you who can't or won't buy a mouse. I used the recommended control set-up of [WASD] keys to move the ship, and the mouse to aim and fire the tractor beam. Holding down the left mouse button draws whatever you're holding in, and releasing it lets whatever you're carrying drop. Useful, since only cows and humans (or human parts) can be taken aboard. Sucking a fleshy creature aboard your ship causes horrible yet delicious things to happen to them as they're processed into Man-in-a-Can.

Initially, you can only pick up a certain amount of weight at a time, but as you earn cash, you'll be able to upgrade your saucer between stages to not only be faster and stronger, but to absorb more damage. Keep an eye on the green bar at the top of the screen to make sure your ship isn't in danger of being destroyed. Survive 'til the end of the stage and you'll be paid based on how many things you abducted, and on your score multiplier, which you can increase not only by picking up creatures, but by causing damage to them by dropping various heavy objects on them as well. I do so love a game that encourages splatter, don't you? 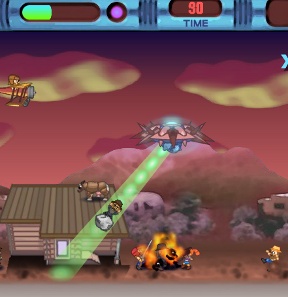 Analysis: Of course, it's not all fun and giblets. (Disappointingly few things are.) The requirements for unlocking new stages are a bit ridiculous, not because they're difficult, but because they're so silly and unimportant. Why should I have to kill a certain amount of people with a rock before I can proceed? I wasn't aware bouldercide was a perquisite for advancement in this intergalactic company. And when they start sending you back to previous levels it all starts to feel a little... grindey. And not the good sort involving spinning sawblades, either.

The action ramps up considerably after the first stage or so, with those tasty terrestrials showing up with more firepower you'll need to dodge. Soon, you'll be . The stages could use some variation in scenery, but all told Abduction! looks and plays great, with weird, frantic gameplay and a dark sense of humour. The stage unlock requirements may cause it to wear out its welcome early on for some gamers, but those of you with twitchy tentacles looking for a simple, fast game to fill an hour or two will be in good company. Now get out there and stock up your horrifying alien larder. Those humans aren't gonna grind themselves, you know.

Jay, whats with all the ads?

[Ads are what keeps JIG in business. It costs a lot of money to run this site every month, and the recession has hurt us like it has hurt most everyone else. I've always tried to keep advertising to a minimum, but times have changed. -Jay]

I think the word you were looking for is "prerequisite", not "perquisite".

Bouldercide is a prerequisite for advancement; a company spaceship is a perquisite. :)

It's fun, but I keep inadvertantly clicking on the add at the bottom of the game, which opens a new window, and takes me out of the experience.

Hi guys -- anybody have any hint on how to unlock level 3?

I can clear Level 2 with a multiplier of about 3.5 and 30 seconds to go, but I can't get the multiplier any higher than that, and it takes 5.0 to unlock Level 3.

This game is very grindy and the requirements for unlocking level 3 are too hard. I'm bored at level 2 so I'm rating this one a 2/5.

The game isn't terribly grindy at all.
It usually took me, oh about two attempts to get any particular check mark. In fact, I got all the checks on level 4 on my first try without even looking at what they were.
Moreover, the requirements for advancing usually require somewhat different strategy and focus. I think they only improve the game.
The game was too short. Apart from that, it was a delight. More levels, please!!

I just hope the folks back home don't realize that 100% human parts is impossible and we're using cow filler!

Unlocking level 4 is a pain. I have to go back to levels 1 and 2 just to get enough money so I'm not killed right away.
Destroying level 3 seems almost impossible.