AaaaaAAaaaAAAaaAAAAaAAAAA!!!
A Reckless Disregard for Gravity

It's been said that for all skydivers making their first jump, there's a mantra repeated as one descends to the ground. It's nothing historically famous like "One small step for man," it's nothing philosophical like "Carpe diem." It's usually (and I'm paraphrasing), "AaaaaAAaaaAAAaaAAAAaAAAAA!!!" 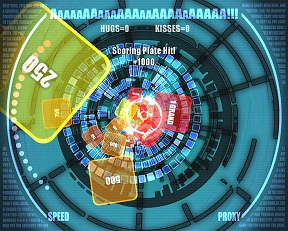 If you're a fan of skydiving games with lots of vowels in the title, Aaaaa! A Reckless Disregard for Gravity (title abbreviated because repeating the letter A 25 times kinda breaks the formatting) by Dejobaan Games is right up your alley. As is often the case with skydiving, your goal is to make it from Point A (generally assumed to be somewhere above you) to Point B (somewhere below point A) without crushing every bone in your body. In a perfect world, there will be no obstacles between Point A and Point B, but this is far from a perfect world, as the skies are littered with airborne buildings and architectural oddities. And birds. And cars. And large glass plates with numbers on them.

At the beginning of your jump, use the [arrow] keys or [WASD] to walk off the edge of the building (or walk around a bit on the rooftop, if you choose). While in the air, you can use the same keys to weave through the air and the mouse to turn and look around. On the way down, you can get points for each building or structure you come close to (called 'kisses'), as well as sticking close to the building for extended periods of time ('hugs'). Extra points can be earned by smashing through scoring plates and birds, spraying graffiti on specific buildings, and waving (or otherwise) to spectators on the way down, but just like in skydiving, none of the glory you accumulate matters if you can't stick the landing (without the landing sticking you)! 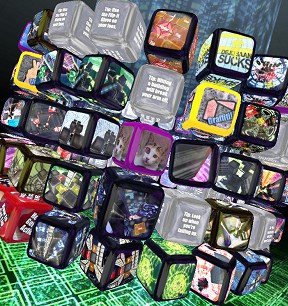 Should you survive with all of your bones intact, the points you've earned aren't awarded to you directly, but are turned into a star rating. The more stars you get, the more teeth you're rewarded with. Yes, I said teeth. Teeth are used to unlock more levels and bonus movies in the level select screen, which makes one wonder the sort of society we are moving toward if we are using teeth as currency. Just remember that to earn teeth, you have to meet or beat your star record for that level, otherwise you gain nothing.

Analysis: If you've played The Wonderful End of the World, you've got a feeling for the sort of random humor employed by Dejobaan Games. Expect bizarre fourth wall-breaking jokes, obscure randomness, and general tomfoolery with the English language. Be warned that this also comes with a side of lewdness, both in the language and content used, but it's used fairly sparingly. Just don't stare too long at the airborne billboards.

At first, it might take a bit of fiddling to get a hang of flying, whoops, falling. It doesn't take much of a push to drift in one direction or another, so be sure to soak in the practice you get from the earlier levels. One downside is that having so many controls to manage under one hand later in the game might get somewhat tricky, but pretty soon, you'll be skilled enough to make the more complex jumps with one arm tied behind your back. (This is not recommended, by the way.) 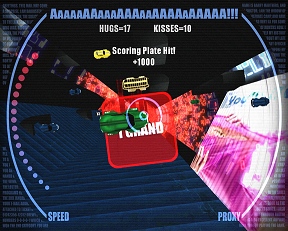 One interesting (but potentially irritating) thing that you'll find about Aaaaa! is the method by which you unlock new levels and features. You can unlock new cubes adjacent to cubes you've already unlocked, and the further you get from the start, the more new levels cost. For reach new level that you unlock (we'll say it has a value of X teeth), you can earn back what you've spent by getting a high star rating (where each star is worth about (2/5)X). If you repeat a level, you can only gain teeth by meeting or beating your star record. This prevents massive unlocking sprees by making sure you've done well enough on previous levels to be able to advance to the harder jumps. If you like the challenge of the game, this is good. If you're impatient and you just want to get everything all at once (including those delightful bonus cubes which can't earn you anything), this is bad. To further add to the frustration, your scores aren't recorded, but rather, your highest star rating, so it's hard to tell if you're improving in between runs or not.

AaaAAAaaa! packs a lot of fun and humor into each jump, and with pretty of eye-catching graphics to make you feel like you're zooming through a futuristic city. If you're ready for a reflex-testing game of skill and daring, grab the rip cord, aaaand...

What? No demo? I wasn't exactly impressed with the little YouTube clip either.

I have seen far cooler games for much less. $10 seems a little steep for such a simplistic game.

From what I do understand.. it is a must-pay-to-play? Bit harsh.. though the video, as far as I'm concerned, seemed interesting enough, I currently have absolutely no money to put on a game. Ah well.

Strange. I was about to post about how you could get the demo through Steam, as I still have it, but it appears that you can no longer download the demo.

In any case, it's a great game. Deceptively simple, and the challenges within each level promote plenty of replay action. Great fun!

It is true that there once was a demo, but it seems to have disappeared. Not sure why, really.

Not even a demo? This isn't what I expect from a casual games blog. :/

Thanks for the coverage. We actually have a demo if you want to give it a go: www.dejobaan.net/xfer/AaaaaAAaaaAAAaaAAAAaAAAAA!!!_The_Demo_Setup.exe

Awesome game. Possibly one of my favourite casual downloadable games in recent memory, ideal for both the hardcore long session and in short bursts just to unlock that next level. Glad to see this get its own review.