What can you do with a month? Well, if you're Arowana, azureXtwilight and Nellie, you can make a free indie visual novel sweet and warm enough to reduce me to tears. a2 follows Sona, a troubled young woman who puts up a hard front, and Hao, fresh into America and struggling to communicate and connect with the people around him. Sona was estranged from her brilliant conductor father right up until he died, so she was stunned when he left her his orchestra and the promise that she'd get paid on each performance as long as she showed up for every practice. She's just been going through the motions until Hao, a former student of her father, shows up, determined to whip her baffled and frightened musicians into shape... despite not being able to speak a word of English or possessing much people skills to speak of. Will Sona and Hao be able to connect despite language and emotional barriers to bring the orchestra to success? Or will they butt heads until neither of them has any hope of finding a common bond? 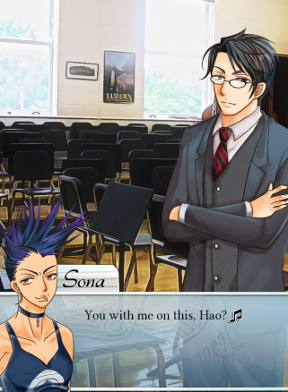 Just click to select choices as they appear and right-click to open the menu to save and load your game whenever you like. The game has three endings as well as a bonus chapter and an unlockable mode that translates all of Hao's spoken Chinese into English... handy, since the story sneakily refrains from translating everything he says, even when you're dying to know. You'll need to find all three endings before you unlock the translation and the special chapter "Reprise", however, but it's worth it if you want a short but definitely sweet cap to the better endings. Though the bonus chapter is exceptionally short, all the endings are worth experiencing, and you'll definitely want to play through at least one more time with Hao's translator on. Especially since Hao... isn't always saying what Sona thinks he is. (Note that this game received its rating for several instances of racism leveled at Sona, some mild profanity, and mild blood.)

Despite its short development time, a2 manages to deliver one of the most satisfyingly emotional and mature stories around. It's hardly what you'd call difficult, and only a half-dozen or so choices throughout that you'd really have to be actively trying to fail to do poorly with, but the emphasis here is definitely on its characters, and Sona and Hao absolutely shine. The use of musical theory to get past the language barrier was clever, but arguably where the story does its best work is in portraying two hurting but human people as honestly and realistically as possible in a way that truly makes you root for them, whether as friends or lovers. Though there's an expansion coming down the road, as it stands now a2 is still a phenomenally well executed piece of work for its time frame, and for a visual novel in general. With a relateable cast, heartbreakingly honest moments, and more than a few laughs, to say nothing of a fantastic theme by the talented Gerald Ko, a2 is the perfect thing to curl up with and relax any time of day and remind yourself that people may be imperfect, but are usually pretty wonderful underneath it all.

Downloading right now, I'll see how much Bilingual Bonus from the start will turn out, since I'm a Chinese speaker and don't need the translation to know what he's saying.

The Chinese in the screenshot look hilarious :>

Is there any way to turn the sound off completely? I set everything at the lowest setting and it's still forcing sound on me. Any help would be appreciated!

Hi dstrosy, may I know what platform are you playing on?

I've tried on Windows, and if you lower the volume completely on the sound/music bar, the sound be completely off. Perhaps it's a bug we've missed! D: Thanks for letting us know about it!

Hi Nellie, I'm playing on a Macbook Pro running Snow Leopard. My thought is that it might not have saved the change, but I haven't been able to get the sound to turn off! I know, I know...it's a game about an orchestra! hahaha...but I even play games on my PS3 muted. Thanks for the response!