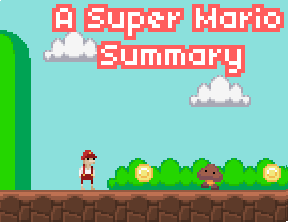 The theme of Ludum Dare 23 is "Tiny World", and frankly, if there's one Tiny World every child of the nineties knows by heart, it's The Mushroom Kingdom. Seriously, close your eyes and mentally run through World 1-1. You know you can do it. For his entry in the contest, Johan Peitz took the original 32 levels of Super Mario Brothers, and condensed the elements of each into single-screen puzzle platforming challenges. The result, A Super Mario Summary, is a loving tribute, but more than that, a very good game.

A Super Mario Summary isn't a level-to-level one-to-one adaptation, but rather a distillation. Its screens have the definite feel of the NES side-scrolling classic, but played through mechanics closer to Lode Runner, where reflexes and timing are emphasized. The redrawn sprites give it a charming bootleg feel, and the level ranking system allow for a nice amount of replayability. The jump physics take a little getting used to (as you'll want to hold down the [spacebar] to launch off a trampoline or enemy, rather than trying to time it), and it's a shame that there's no bouncy, just-barely-not-copyright-infringing music playing in the background, but overall, A Super Mario Summary is a fun bit of nostalgia and a worthy contender for Ludum Dare gold.

The ending was definitely worth it.

Well, I finished it, but it was a pretty joyless experience.

You just cannot make Mario tribute with a game which has shoddy controls and horribly uninspired level design. Instead of time trials and star ratings I'd rather see levels that present an actual mini-challenge or at least differ slightly from one another in something other than graphics.

I know limited time was an issue, but I still think the game would be much better if less time was spent into making this a Mario tribute and more into injecting actual fun in the gameplay. :(

This game is lacking in originality, there should be a way to block players from jumping over the flagpole or give them a fourth star rank.

it was fun... needed a little more depth ... maybe make it mandatory to get all the coins otherwise flag pole does not work...