A Ride into the Mountains

A Ride into the Mountains is an artistic take on a retro arcade game created by Lee-Kuo Chen. You play as Zu, a young man who lives in a remote cabin whose only purpose is to protect an ancient relic from harm. When something happens to said relic one morning, Zu grabs his bow, hops on his horse and heads out to investigate. 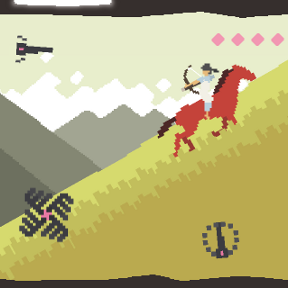 Riding through forest and field, Zu must shoot down demons while avoiding their attacks. Tilt the mobile device back and forth to move left and right, and tap and drag on the screen to take an arrow, aim and fire. The difficulty comes from riding and firing at the same time, often utilizing the focus ability bestowed later in the game. Demons come at you from all angles, and as you'll see you're not always riding on a flat surface with the sky in perfect view. A Ride into the Mountains adopts a lot of dynamic camera movements that make it feel like a playable piece of cinema.

If you're familiar with the likes of Ico and Shadow of the Colossus, you'll immediately feel at home with A Ride into the Mountains. It's the perfect distillation of those games, packing everything into a portable size that's easily playable in small chunks of time. Beautiful music, breathtaking scenery, a touching story, and some boss battles that are surprisingly intricate. A Ride into the Mountains really is a miniature masterpiece.

A Ride into the Mountains
(iPhone, iPod Touch, iPad)

A Ride into the Mountains
(Android, Android Tablet)

Very enjoyable! Well worth a buck!