A message from Easy Only! Games 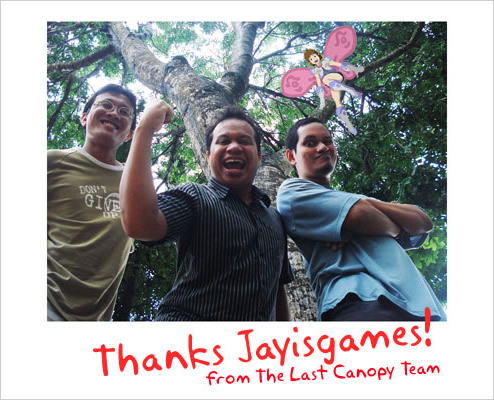 I have a confession to make: before August 2007, I knew nothing of Jayisgames. Back then, I was this little guy who keeps coming up with game ideas, but had no drive to execute them. It wasn't because I was lazy or anything; I just kept questioning the games' purpose.

I kept asking myself:

I was drowning in a culture where people keep questioning the financial feasibility of a creative piece. Of course, this was the after-effect of being in the advertising industry for some time. In the end, no effort was taken to realize those ideas.

Then, I stumbled upon your site. I thought I'd give the competition a shot, you know, for fun. And that was when I made Ballistic Wars. I really expected a lukewarm response, but to my surprise, the community shouted back. And not only to my game, but to all the game entries! Feedback, criticisms, requests for walkthroughs. I was totally amazed.

This is the very same community that you guys started. The effort that you all took to flourish the casual game community is astounding. Holding competitions, writing awesome reviews regularly, responding actively to the community and even giving out plushies!

And I was even more convinced when the fifth competition started. Just look at how the team managed the competition! It was clear that the Jayis team put a whole lot of effort into making the competition smooth-sailing for everyone. You were all very helpful, and even helped to defend us developers against nasty naysayers.

As I ponder more and more about your efforts and the audience responses in your site, I realized that I have changed since I arrived in Jayisgames eight months ago.

I have finally realized that games are meant to entertain, not just to make money. Yes, it is you guys who woke me up!

As a game developer and a member of the casual game community, I sincerely thank Jay and the team for everything that you all have done.

On behalf of The Last Canopy team, I would like to thank you all for awarding our game first place. Even now, I'm in a state of disbelief! This is really a big break for me, and I will do whatever it takes to leverage this opportunity! I shall continue to make better games, and for every game I make, I will always remember that I have the Jayis team to thank for!

Hope that didn't sound too mushy and long-winded, but I meant every word of it :)

Oh yes, attached is our thanks, in JPG format! That's me in the center, the illustrator and background artist Dzaid on the left and the enemy ship designer Aidi on the right. I thank God for having these two talented cousins by my side!

I'd be more than happy to lend a hand for the next competition, be it logo design, HTML coding, anything at all. Just let me know!

Thanks so much. Jayis team rules!

The Last Canopy was an excellent game. You guys have every right to be totally proud of yourselves :).

Also, I agree that Jayis is a great website and community. I visit every day, much to the detriment of my productivity ;). Keep it up!

The Last Canopy was a fabulous game, and you guys were so kind to make it for us to play! :) You are so welcome, and thank you guys for your kind thank you! (Haha, I hope that makes sense!)

Anyway, you guys are awesome, and I'm excited for the next competition. Hope to see one of your games there!

Changing the world, one developer at a time...

Is there anything this site can't do?

Congrats to Easy Only! Games! Hope to see another great entry in the next competition.

Wow! JayIsGames changes lives! I'm glad you've found motivation to avoid procrastination and end up with the realization of a superb demonstration of flash animation in this community. It's something to think about, where motivation comes from, how we can stop having "splendid" ideas that never become a reality and start working hard on things we love, without worrying about rewards and payment, which, I hope, will eventually come to everyone who make such a good work like you. Congratulations!

Thank you, Easy Only! Games, for stopping your procrastinating to create a game that will cause procrastination across the nation. :D

Hazmer, Dzaid and Aidi - Your message didn't sound too mushy and long-winded at all! It has wisdom and insights that some people never come to.

It sounds like you guys have all the ingredients for success. And Dzaid's t-shirt has the most important ingredient... "Don't Give Up"!

Best of luck to you.

That is the single greatest photo ever taken.

Aw, that was so sweet.

Ahh, doesn't it just give you a nice warm fuzzy feeling?

Hear hear! Seriously. If it wasn't for Jay is games, I probably wouldn't even make flash games anymore.

It's nice to see some feedback from these guys... the last canopy was a superb game and worthy winner. In my opinion JIG is the kind of site that can change you. I first found it out of boredom a year or so ago, and I think I have been visiting everyday (give or take a few holidays etc) since. I recently decided to teach myself flash because i've enjoyed other peoples games so much... congrats to Easygames and JIG for a great competition.

The game is great though :p

baba, it's not the same team that made Ballistic Wars. Only Hazmer is on both teams.

There are two things that I really like about JayIsGames, that keep me coming back regularly.

First, they strictly enforce positive and constructive discussion, so there are never any stupid flamewars on the boards. I'm sure this makes for a more rewarding experience for the developers too.

Second, the game analysis capsules are overall a nice way to navigate games. Many other flash game sites are simply a sea of links and thumbnails, and it's easy to get lost. I think that the game descriptions here tend towards overly wordy, actually, but it does make it much easier to navigate to have each game as a distinct unit.

Finally, as far as I know, JayIsGames has thus far been the exclusive home to EasyOnly Games, so where else would I go :)

As usual, the JIG community is as active as ever. Thanks for support and all the encouraging comments everyone, you guys rock! :)

baba:
Yup, this is a different team. Thanks for clearing that up, ThemePark.

Actually, Easy Only! Games has only one employee: me! For both games and games in the near future, I'm the game designer and programmer, while I get my family, friends and students to be the artists. I'm really blessed with so many awesome talented people around me, partially because I worked in the advertising industry before and am currently teaching in an arts & design college.

For the next game (a spatial puzzle game!), the girl in the Ballistic Wars team (Nyin) will be helping out with the graphics, together with her sister Yean! It'll be ready in the next 2 weeks, so look forward to it :)

Boston Gamer:
Again, thanks so much for your continuous support :D You reminded me on another exclusive home that I should be working on: the Easy Only! Games website! Ironically, my artist and I have been procrastinating with that one for a long time! We're in the midst of revamping the site, I'll let you all know when it's ready!