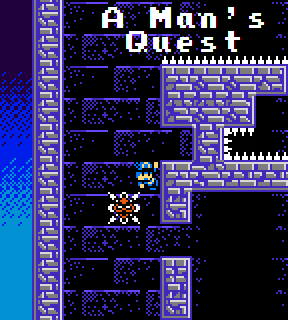 Stupid Kevin! First he calls dibs on the coolest tree in the forest. Now, this ghost thing is talking about how Kev's some sort of "Chosen One", selected by the gods to enter that nearby ominous tower and free the specters imprisoned within. You'll show him! Once you make it to the top of that tower, you'll be able to call dibs on it and Kev's stupid destiny! Oh, and uh, free the captive spirits and stuff. A Man's Quest is an HTML5 action platformer by The Drunk Devs that hearkens to yesteryear, both in terms of its retro graphics and its childlike-spirit.

Use the [arrow] keys to move and bounce Ty around the landscape and the [spacebar] to advance through dialogues. Once you've explored a little, you'll find the grip gloves, which will allow you to safely hang from platform corners. You can also move across or up and down ladders that you cling to, tapping the opposite direction to jump off, or the opposite direction and up for a higher jump. Avoid spikes and enemies to make it to the top of the tower. That'll make a man out of you! A Man's Quest quite satisfyingly captures the 8-bit spirit with its challenging but fair platforming, pixellated visuals, and spirited soundtrack. The humor in its writing is a little juvenile, but honestly so, capturing the immaturity of children without getting too cloying. The loose jump physics, while accurate to the era A Man's Quest hopes to emulate, may put some off, but the game is forgiving with its checkpoints and respawns. Clocking in at about twenty minutes, A Man's Quest is a compressed burst of nostalgic fun that's enjoyable times infinity.

For best results use Chrome or Firefox, or download the freeware version.

Yeah, its not working, clicking on any of the keys doesn't work either. The music's of a pure nature, though. Increases my anticipation for actually playing it.

Ditto here--game doesn't seem to be responding to mouse clicks.

I had tested the game in Chrome when hosting it, and it works fine in that browser. However, this appears to be a Firefox issue, and Gavin, the developer, is working on a fix right now. I've unpublished the review until we can get it sorted. I apologize for the inconvenience while we work it out.

Update: We got the game running in Firefox (on Windows only), so if you're on a Mac, you'll have to use Chrome to play this one. HTML5 still has compatibility issues.

bizarrely, I'd found it on the developer's page and it worked fine in FF...

And it should work just fine in Firefox (Windows) here as well. The game will not work in Firefox (Mac) at either location. -Jay]

A game about peeing off the top of things. A relieving game.

Works fine on Safari on my Mac. But when I got to the first level of the tower it froze up. Probably just my computer thought.

...That is one huge bladder Ty has. Kept peeing all through the credits, which lasted about a minute, and that was before he had dinner.

The first time I played this game, as soon as I got in the tower and to the part where he says "Why is there a skeleton in here?" my page crashed. I reloaded it (kind of mad that I had to do it all over again) and played again, only for it to crash at the same part! Can someone help me please? I really want to play this game!

I am stuck exactly one ledge up from where the guy is in the screenshot. HELP!

PoP! I made the jump, after many several attempts. :)

being able to control the pee at the end

I have link for people who are stuck part way through. I put up a special build on my site for anyone who gets stuck at this location.
http://www.drunkdevs.com/storage/games/a-mans-quest/final-special/index.html
It sounds like it might help this person.

Clicking through endless sophomoric dialog: TEDIOUS. Actual gaming: Not bad! Peeing as a reward for winning the game: Pretty weird from the female gamer's perspective.

I enjoyed that a lot more than I was expecting - perhaps because it wasn't vastly difficult but didn't punish you too harshly for tiny mistakes. Laughed more than I expected too.

Thanks so much DrunkDevs! Now I can finally get to the ending!