A Llama, A World and a Plan 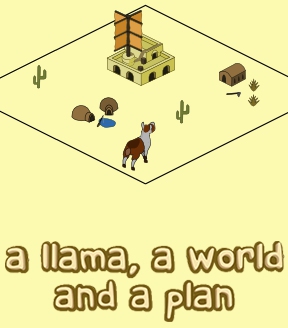 Once upon a time, there a was a young llama with a dream. A dream and $200 adorably clutched in his hoof. With that hoof-ful of dollars, he would take the wretched turf left to him by his father and become... KING! King by plagiarizing all the neighboring cities, but still. In A Llama, A World and a Plan, a building simulation from StefanT, you can become a Lama glama and make your every ungulate wish come true.

The tutorial is excellent. You start out with a blank piece of land and the $200. You're a rather empty headed lamoid, so instead of trying to come up with ideas of your own, just clop clop over to the next town and click on some of your neighbor's buildings to copy his ideas. You thief. It does take a little money to copy it, however, so maybe there's some kind of licensing going on here.

Ideas copied, return to your homestead and click on the lego block like icon to build. Once you've built several places, click the exclamation mark to work. Some buildings will get bubbles over them indicating that they can be collected from. Collect from all the buildings because they will change color to red and eventually disappear.

To get to be king, you need to progress through several goals, which you can find by clicking on the book icon in the upper right. Goals include advancing buildings up to three stars and building 3 of each kind of plant. The fourth goal will unlock the castle, and once you build the castle, you need never work again! Hip hip hooray! Or as the llama says, "Mwa mwa orgle." I'm just working from Wikipedia here, folks. 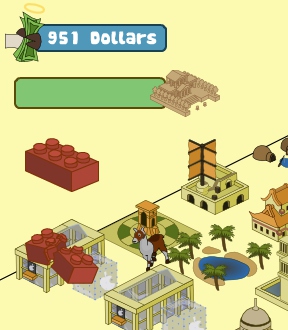 Analysis: ALaWaaP (the acronym flows trippingly off the tongue, doesn't it) feels more like the proof of concept of a great game than an actual, fully formed great game. The lack of save is the most significant drawback, and the tutorial is unskippable, so you have to go through it again every time you play. Save, casual game developers! We players actually really, really like this function!

That said, the furry little llama heart of the game is solid. I really did want my idea-pilfering llama who "doesn't know what buildings are," but somehow perfectly understands money, to achieve his life goals. Any ruminant with an opposable thumb deserves to have his dreams come true, in my opinion. The art and music has a lot of charm, with some cute little touches like the "Apricot" store selling cell phones. Rough cultivation, to Chinese restaurants, to disguised versions of Apple: civilization in three easy steps, y'all. The game interprets the sandbox theme into a world that feels like playing with a sanbox, only instead of heaps of sand, there's outdoor toilets and fast food. (If there are cats in your neighborhood, then it's like playing with a sandbox, only somehow you're making money from the outdoor toilet in it, and the food is burgers instead of dead birds.)

While we'd certainly love to see the game improved, it was a wonderful and enjoyable entry in the Casual Gameplay Design Competition 8, and I know all of us at JIG will be looking forward to StefanT's continued efforts in the future.

Play A Llama, a World and a Plan

ahhh where is the last species of the plants? I have only six and every city unlocked. In case any one wondering they are: cactus, round cactus, palm tree, bush, purple flowered bush and white flowered bush.

and the power of posting strikes back... never spotted the red berry bushes :/

The game was simple, easy, and made tons of sense. Although there were a few bugs you could abuse to skip a few seconds when copying or constructing buildings, the game was polished and really well made.

Where is the 7th plant?

I must be blind as i can only see 6 different plants. Can anyone tell me what the 7th is???

yeah, wow. talk about a waste of time. really easy, almost to the point of pointless-ness.

Does anyone know where the seventh plant is? I've got cactus, round cactus, palm tree, white and purple flowered bush and bush. But I don't know where to find the last plant.

I'm pretty sure I've met the requirements to become King, but apparantly I'm missing something..

Ah, nevermind. It promoted me after the next time I worked.

For those of you wondering about the 7th plant, if you look carefully

there are 4 bushes (normal, white, purple, and RED)

it's on the same map as the other ones.

I seem to be having a problem opening the game in a new tab with firefox using the first picture. I get this message.

"Firefox doesn't know how to open this address, because the protocol (ttp) isn't associated with any program."

Thought i'd let you know.

[Thank you. It was a typo that's now been fixed. -Jay]

I seem to have bugged the game by removing a building right after "levelling up." The first time I did this, nothing happened, so I assumed it was okay do to it again, but alas, I am at 306/150 city points and I am pretty sure I built all the buildings available to me, so I must have made the game unwinnable. Alas, and alack! Woe~

@Reibar- make sure you have EVERY building built. i did what you did with the leveling up and i still beat it.

On another note, hooray for games that teach us real-life lessons!

I had to work one more time after building all of the buildings. Try that.

Okay, so I'm having the same problem many are- that is, I have met the requirements for Kingship, but am not awarded such.

This was fun! I was a bit puzzled about not being Kingified, but it turned out I'd missed one low-level type of building which looked vaguely similar to one of the other buildings.

I enjoyed it very much. Thanks!

Quite fun. :D I even found the 7th plant without help. XD

whats the advantege of a castle????
because my experiance with THREE OF EM IS NADA

Looking for the 7th plant?

Go to the Apricot Store land, and there will be a white bush, a pink bush, a normal buch and a RED bush.
The other plants you need are the cactus, round cactus, and a palm tree.