A Life Worth Dying For

Part brain-training game, part innovative storytelling, A Life Worth Dying For by Mutlu Creative is likely to be one of the most unusual iOS games you play this year. Created out of the developer's personal fear of dementia, the game takes you on both a puzzling and emotional journey into the meaning and uses of memory in a way no game has done before. Unlike standard brain-training "games", A Life takes a much more game-like approach to memory play both through more demanding stages of gameplay over time, as well as through a leveling-up strategy that charts your progress to ever more difficult memory challenges. Using real memories in the form of audio and video files from the life of the developer, a picture of how memory works is developed as you get deeper into the game... as well as a picture of the life of the man himself. 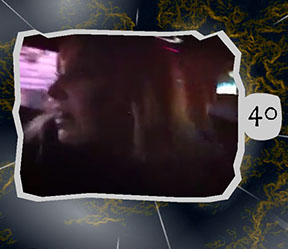 The setup is that you (playing as the main character/developer) are dying, which is visually represented by falling through clouds. You wonder if it's true that your life will flash before your eyes, but of course that is dependent on whether or not your memory is sound. The gameplay itself is based on a theory of "n-step" memory training where you begin by remembering two steps back in the game. In the first round, you only have to remember spoken words, and in the second, only visual cues. The third round is where it starts to get complicated, as each audio cue is accompanied by a video cue. One or both of these cues might be repeated, which is when you act. If you get it right, a bit of your character's memory will indeed flash before your eyes, or ears, the tiny pieces of a life well lived. The better your memory, the more focused you become. Not only do correct answers generate points, but increased Focus can be exchanged for a huge point bonus. As you level up, it becomes more critical to improve your focus. More than 50% missing or incorrect answers can even decrease your focus in early rounds, and the really hardcore rounds can even bring back negative point scores!

Details abound. Each round will walk you through both a tutorial and a guided level so that you clearly understand the simple but specific rules. Rounds are punctuated with facts about aging, dementia, Alzheimer's, and memory theory. Every time you restart the app, you're treated to a famous quote related to memory or intelligence. At any time, you can quit out to the menu and look at detailed statistics regarding your own proficiency with the memory tests. The music and sound effects are perfectly integrated, and in fact may serve as pneumonic devices. And the game itself is rife with details, but still completely accessible on the small iPhone screen. The artwork changes based on the type and correctness of your answers, you can pause a game, and it's even possible move up or down to a more or less challenging stage of play. 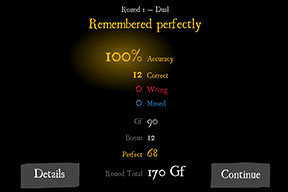 Analysis. In a recent study, teachers found that students who were required to remember back several steps in memory training games had improved intelligence in other tasks. While the "2-step back" approach seems simple enough to grasp, in this game it becomes more difficult as more complexity is added to it, as well as by increasing the speed of the stimuli. The urgency of the designer translates into the experience in some unexpected ways. For example, a wrong or missed answer seems to cause your character physical pain. At level 10, you gain a new stage which requires you to remember three steps back, and at level 20 you'll have to remember four steps back. And even then, the game isn't through with you.

If a criticism can be found, it's that the voice acting is occasionally muffled sounding. Fortunately, if the precise word can't be understood the first time, at least it is recognizable when it's repeated. The game is weird and mindful and strangely compelling, and it might strike you as painful or uplifting. Instead of a dry, uninspired brain training game, you'll be motivated to spend your 15-minutes of mental exercise every day trying to gain greater mastery over the "n-step" gameplay in A Life worth dying for. The lovely truth is that developing a strategy for a better score helps develop real memory strategies as well. At the same time, you'll become more and more immersed in the life that is being remembered. And you might forget that it's a life lived by someone else.

A Life worth dying for (iPhone, iPod Touch, iPad)

I had a really visceral response to this game, a true "AHA" moment when

I realized that these bits of memories might actually be much like the experience of someone with dementia or Alzheimer's. How frustrating or even frightening to live in a fog where you can't remember anything, and suddenly, something sparks a memory and for JUST A MOMENT, you have a piece of your life back. I cried as I thought of people close to me who have struggled with memory issues (and I'm crying again now thinking about it).

I don't know that others will have anything even approaching the emotional response I had, but I hope they do. Yes, the game is strange and surreal and these aren't YOUR memories, but it's powerful.

This will definitely be my brain-training game of choice for a long time to come, and not just because I reviewed it for JiG, but because it was that good!

Hi, this is Mutlu, the developer of this game. Sorry, the Android version didn't make the launch, but it's not far behind. If you'd like to be notified about the Android launch, please join my mailing list or follow me on Twitter/Facebook.

Update:
The game is also on Android now, available on the Google Play Store.