A Game of Numbers

It's not often you see the words "fun" and "math" in the same sentence (in a non-sarcastic tone), but A Game of Numbers is a fun math game that hopes to challenge that statistic. In this maze-type puzzle by JoeDev Studios, you play as the yellow box with a number in it, which is the box's value. That value is the key to bypassing the obstacles between you and the exit! 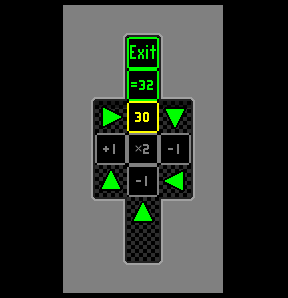 As you move around (using the [arrow] keys) and touch the other boxes in the maze, the value in your box will be changed according to the operation in the box, be it addition, subtraction, multiplication, division, or a modulo operation (represented by %, which returns the remainder when your value is divided by the number in the box). Red boxes will disappear after they're touched, while blue boxes can be touched multiple times, and grey boxes can be passed over multiple times. In most puzzles, you'll need to make your box comply with the values in the green boxes, which require your value to be greater than, less than, or equal to a certain number to pass through.

In addition (heh) to the operation obstacles that block your way, later levels introduce buttons that open and shut doors, arrows that restrict your movements, and switches that take your current value and inject it into the connected boxes. The 75 levels in the full version of A Game of Numbers start with basic operations, but soon turn into tricky algebra problems, whether you realize you're doing algebra or not! There is also a level editor available to try your hand at constructing math maze puzzles, and extra user-made levels are available to download from the main menu.

Analysis: A Game of Numbers is pitched as being "Fun if you like math... Still fun if you don't". This is largely true, as a good portion of the puzzles can be solved with brute force and doing maybe one or two simple operations to make sure you're on the right track. Some levels, such as Sewers I and II, might not even require heavy mathematical processing at all, as much as just good strategy; in these levels, you're required to open the path to the exit while keeping your value below a certain number, but being forced to cross blocks that increase your value. You probably can't crunch the numbers in a puzzle like that, but you can plan out the best path of attack. Since you only need to solve three puzzles in each cluster of five to unlock the next five, you have a fairly good shot at reaching some of the later levels without pulling your hair out. 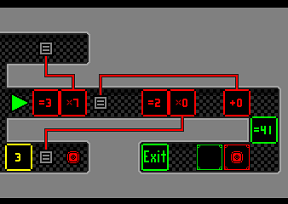 That said, there's something pleasing about searching for the "mathematically best" solution to a level that you just don't get with brute force. If you're into this game for the math, be sure to keep some scrap paper (or better yet, graph paper) on hand for some of the trickier puzzles later in the game. While playing, I thought of the classic image of the student asking when they'll "ever use this stuff again" (seriously though, if two apples and three pears cost 27 cents and four apples and one pear cost 29 cents, why are you asking me how much apples and pears cost, did they not give you a receipt?), and I found myself gleefully crunching the numbers in ways I couldn't have imagined way back when.

There is one tiny quirk that might send mathematical purists into a bit of a tantrum. When you divide your value by something it's not divisible by (say, 30 by 4), the value returned is the number rounded down, with the decimal dropped (so, 7, not 7.5 as it should be). This might or might not be a quirk that could be exploited to beat some levels, but levels are often designed to be easier if you ignore the exploit and divide your numbers evenly. Whether you're a hardcore numbers nerd or just a casual digit dipper, A Game of Numbers welcomes you with open arms into a pleasingly simple environment of clever puzzles.

(An apple costs six cents and a pear costs five, by the way. When was the last time fruit was that cheap?)

Play A Game of Numbers (demo)

"There is one tiny quirk that might send mathematical purists into a bit of a tantrum. When you divide your value by something it's not divisible by (say, 30 by 4), the value returned is the number rounded down, with the decimal dropped (so, 7, not 7.5 as it should be)."

Actually, math purists who throw a tantrum over that need to hit the books again, since it's just simple integer division. As you said, the game also supports the modulo operation "%", which returns the remainder for integer division, so it makes sense that it should handle division this way (30 divided by 4 is 7 with remainder 2).

That's a really interesting point. I had never heard of integer division before, so I researched it (aka spent twenty seconds looking at Wikipedia), and I guess that for me at least, my instinct would be to return a decimal or fraction value (like points 2 or 3) rather than just the integer sans remainder (point 5). My guess is that unfamiliarity with that option is what would throw a lot of people (myself included) off.

@ThemePark:
No, there are more levels in the demo. At the end of the demo, it should show �Thank you for playing! hope you enjoyed it!� Apparently the black screen happens on Firefox. Try Chrome.

Hint for the last level

Hope that helps some folks.