A Dog for all Seasons 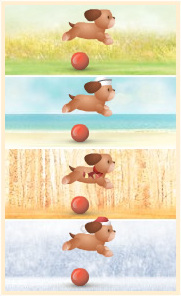 Anyone familiar with Ferry Halim's Orisinal collection of games will immediately recognize his characteristic style of art in the image to the right. Those who are not yet familiar are in for a treat: These playful pups are the main characters in his latest Flash game.

A Dog for all Seasons pits you and four (4) puppies against an array of red balloons of increasing number. The object of the game is to coordinate all of the puppies so that they jump over all of the balloons.

Easier said than done, since coordinating them all grows ever more difficult the further you get in the game. And besides, have you ever tried to keep your eye on four real pups at the same time? You get the picture.

Controls for this game require two hands: one on the mouse, and the other on the space bar. You may click the mouse in front of or behind any of the pups to move that puppy forward or back respectively. To realign all pups together vertically, click and hold the mouse button down where you want all of them to line up.

Press the space bar to make all of the puppies leap in the air simultaneously when a red balloon gets close.

Eventually multiple balloons will begin to appear for which a puppy will need to long-jump to clear them all. To long jump, press space then click where you want the puppy to land beyond the balloons.

For every balloon a puppy fails to jump over, you lose a balloon marker. Lose all eight (8) markers and it's game over.

The best strategy for playing this game is to watch the sequence and pattern of the balloons that appear, and then position the puppies appropriately so that you can make all of the necessary jumps. Remember that all puppies jump at the same time, and you will want to save enough recover time for the next pup to jump.

This game has one of the more complex control schemes of any of the Orisinal games, and yet after just a few times playing the controls feel natural and intuitive. The gorgeous art and animation, as well as the tranquil soundtrack make this another wonderful addition to Ferry's amazing collection. And with the release of Nintendogs just two (2) weeks away, what better time than the present for a brand new Orisinal game to promote playing with puppies.

Play A Dog for all Seasons

I was impressed with Orisinal before coming to your site, but this game is a new level in excellence! Cute and clean artwork and simple, fun gameplay make this a great game. Good pick!

I dont quite understand why but the only game Ive been lucky enough to play from Ferry Halim was 'a daily cup of tea'. I use XP's firefox and it worked for me only once; since then however Ive not been able to use any of the games from Ferry Halim... I cant even load the homepage. If anyone knows of a fix or a mirror site for these games I would definately be grateful.

XP is Microsoft's operating system, and Firefox is a Mozilla-based browser that competes with Microsoft's IE.

So I'll assume you must be using Firefox on Windows XP. First thing I would suggest is download the latest Firefox browser. I believe the latest release is 1.0.5. Next, install the latest Flash player plug-in. Click on the "Get Flash" button in the left-hand sidebar.

If you have set Firefox to disable pop-ups, you may want to set it to allow them from both mine and Ferry's site. You won't be receiving any unwanted pop-ups from either place, trust me.

If you still are having trouble, send me an email describing the symptoms, and I may be able to help you further. good luck!

Fun game, I just have horrible coordination at 4 in the morning... I'll have to try again tomorrow.
And Firefox is up to 1.0.6

This is an awesome game, Jay! I also can't wait for Nintendogs! My mom has yelled at me since I was 6 about having dogs lol. Now I can have the next best thing, Nintendogs!

Orisinal games are my favorite games. I'm glad you post them because I often forget to check his site often since the updates aren't as regular as they once were.

This one is a little more complex than the other ones, so I can see it holding my interest more than some of them.

I am so bad at these finger coordination games!

Sorry for any misunderstanding I only meant that I am using FireFox for XP not Mac/other. I have the latest version of FireFox, Flash, and just about everyother app out there. I dont have popup blocker on, java is enabled, as are cookies and all the other games I have loaded from your site work perfectly. So I am quite simply baffled...

I'm afraid im having the exact same problem with rob. I played some orisinal games before, but now the page just loads and loads until it times out. The same happens with ie.

I like this game, especially the music
does Orisinal ever have their music products?

Orisinal does have a store where you can buy loads of pretty things, but not music, to the best of my knowledge. Andrew and Rob: I use Firefox on Windows XP, and I do occasionally have the same problem as you. I would recommend clearing your cache and trying again, and refresh until it works. If it still doesn't. . .I don't think I can help you, but that's a shame, because they're beautiful games you're missing. Check it out on a friend's computer?

Hi like this game although I am still trying to master the techiques of this game. It's very cute, the music is calming.

Totally love a dog for all seasons. It has made me very happy to watch the good little dogs skipping along to such a peaceful tune. But what is it with the cakes surely as most dog owners would tell you a good little dog would always prefer a biscuit of any description.

hi , i love that game of Orsinal
but i need to know please , that song..
or "sound track", i like it so much,
how is the name of the song,
or the real version
i dont know
please , i will be waiting the answer

what is the name of the music or song thought it is brilliant!

i love the song, orisinal always has the appropriate song. i can't better my high score though, i don't know why:

I want this soundtrack!