You've been a bad child. Maybe your behavior's been shoddy; maybe you're just not trying in school. Or maybe you're trying your hardest and it simply isn't enough, and that's the worst kind of failure of all. A bad score will mean... consequences. Can you pass, or will you be "removed from society"? And why does the test seem like it was designed to terrify children rather than fairly evaluate them? 3 Blind Mice, a free point-and-click horror game from Seemingly Pointless, doesn't provide many answers... but does provide an interesting experience nevertheless. 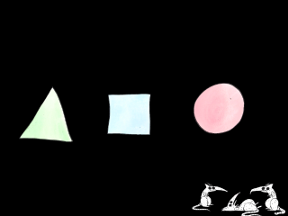 The test is fairly simple, of course, since it's supposed to be geared towards fictional dystopian children. You'll point and click your way through a series of questions that might challenge a little kid... in other words, nothing's going to be very difficult here. Be on the lookout for screamers, though. Since the game doesn't extend past the end of the test, it's a self-contained experience and there's no real way to lose. It's about what you see while you're taking it, the dissonance between the content and the intended audience, and the disturbing context of that dissonance. Sometimes the lack of subtlety ("The Government"?) is a little bit jarring, but for the most part it's easy to sit back, listen to the mice's creepy murmuring, and pretend you're at an age where identifying shapes and colors is a feat worthy of praise.

To some, dystopian themes have felt more relevant lately. With the recent news about government surveillance in the US, it's an especially hot topic... the thought of being watched, especially by the people in charge, inspires a lot of strong feelings in a lot of people. It could be that 3 Blind Mice is, or can be taken as, a commentary on these current events, but if so, well... the message sort of gets lost when the surveillance aspect seems to fall through the cracks. However, even if it doesn't work as a commentary, it still works as a nicely chilling piece of entertainment, especially since it should only take you about five minutes to play.

[Note: Our staff debated whether this game was meant for players of all ages, or only adults. We came to the conclusion that it's probably not meant for children at all, and it's likely to be too scary for the very young. Older or more mature horror-loving children may still enjoy it, though. Parents, play first, and know your child's limits.]

That was sufficiently creepy.

The gameplay is too childish for an adult to enjoy and the rest is too freaky for a child to play. I personally found it hard to understand the mice's mumblings so subtitles would have been nice (Saladfingers style maybe?). Especially when not hearing the question resulted in a random click and a screeching jump scare.

The biggest let down for me is not getting a result after being tested. I don't want an actual score but surely they could have come up with something creepy and witty to end the game with. You have failed so the farmer will remove your eyes or the cake was poisoned. This game has the potential to become something more interesting at least.

Which kid play this as an education game? It will let'em have nightmares!! But scare children is fun so this game is totally worth to download.

Definitely disturbing. Am still waiting for the Ministry to take me away...

I love this kind of thing, but I think it might have been better if it played it more subtly. Keep the actual contents kid-friendly as though it had been designed by an actual relevant committee, then just subtly lace it with the underlying threat, and I think the experience would be a lot stronger.

Oh, a quick bit of advice: Don't skip the EULA in the installer. Trust me.

I'm not sure it installed right. What's it supposed to look like when you first load it up?

It should go through a little starting montage of credits. If you're not getting that, something probably did go wrong.

What the hell was that? That, my friend, was quite frightening.

Also, I think the point of not knowing your score at the end is supposed to mess with your head. Did I pass? Did I fail? Is this game actually run by The Government? Will they come take me away in three hours time? Am I worrying about nothing?

For those people who are paranoid of The Government, this is, as I said, a frightening game. It adds a whole new level of terror.

Something went wrong, but I have no idea what. The installer wanted to install it to C:\Users\Me\ although I changed that to D:\Users\Public\ (I have Windows 7 Professional if that's relevant, although I'm not home at the moment and I'm using an entirely different system, so I can't double-check that I'm remembering right.) When I started the game the first time, there was sound, possibly music, but the screen was all black and it turned out I was clicking on my Windows Explorer window. The second time I started the game, the screen was all white. That's when I un-installed it. :(

I wish that the game came across feeling more childish. It would have helped the creeping feeling of the game.

Not bad at all thought. |Wonderfully creepy.