Please note that this game is currently incomplete. Future chapters will be released, also for free, as updates as they are completed.

A long time ago, in the magical land of Equestria... No, wait. Sorry. Got confused. In the first chapter of Miwashiba's free indie RPG adventure 1bitHeart, translated by vgperson, you play the reclusive but good hearted boy Nanashi, whose days spent shut in playing games, sleeping, and eating pizza, just like everyone else, are interrupted by the arrival of a strange girl. The girl, Misane, doesn't remember how she got into his apartment, or why he found her asleep in his bed, and she also doesn't really seem to know much about all the technology that's commonplace for everyone else. What she does know, however, is that she's seriously troubled by Nanashi's lack of friends and his willingness to let everyone walk all over him and call him whatever terrible names they like, and so to Misane the goal is clear... help Nanashi make friends! But something strange is happening in town, and odd as it may be, everyone's safety may wind up depending on Nanashi and Misane. With a fantastic soundtrack, gorgeous stylized artwork and environments, 1bitHeart is cute, funny, and professionally polished to a remarkable degree, though the friendship-making "battles" a la Phoenix Wright-esque format might be a bit rough around the edges. 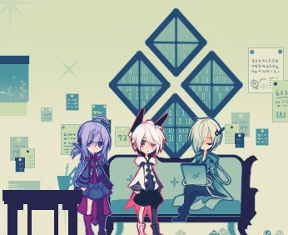 Use the [WASD] or [arrow] keys to move around, [Z] or the [spacebar] to interact, and [ESC] to open the menu, which also allows you to save your game. From the menu you can also access Mutter, a program Nanashi has coded that lets you view messages and chats from different people. Initially your goal is simply to explore the area, talking to different people and trying to find a likely candidate for Nanashi to make friends with... which is easier said than done since Nanashi has no filter and tends to say whatever strange thing pops into his head and a lot of folks tend to find his goofy, care-free nature off-putting or annoying. Talking to other characters may help provide you with clues on how to better get to know someone, which is important when you want to try making friends with them. Nanashi will enter Talking Time, with his mental health represented by the points in the bottom left corner, and if you say the wrong things, or bring topics up at the wrong time, his points will begin to degrade until it's game over. As a result, you'll want to check your Memos under the item menu frequently to stay up to date on the information you learn about each character. It's up to you to decide when to break into the conversation and present a topic for Nanashi and his potential friend to talk about, though figuring out when to do so isn't always easy.

When you're not currently chasing after the main plot, you'll enter Free Time, which allows you to wander around and chat up various townsfolk to befriend them. While in Free Time, you can play minigames on Nanashi's computer, or buy items you can give to people to help make them like you. If you're talking to someone, you can examine them with the magnifying glass icon to learn a little more about them based on Nanashi's observations, try to give them something you think they might like with the heart icon, or continue chatting with the word bubble. 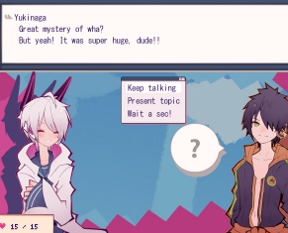 1bitHeart is weird, to be sure, but it's a good sort of weird, and infinitely charming to boot. While Nanashi lacks social skills and can often say strange things, he's different from the typical shut-in gamer trope in that he is genuinely a good guy, selfless to a fault. If other people are happy, he's happy, even if that means doing things he doesn't actually want to do, or that impact him negatively. He goes with the flow with a smile, and doesn't seem to get why Minase is so disturbed by his cheerful descriptions of the names people call him, or the things he's done for them. It makes you root for him, and to be fair, it's not like the rest of the cast is any less strange either. It's actually sort of baffling that this is a freeware game given the high level of quality on display, from the gorgeous artwork and colour-rich shaded environments to the myriad of catchy soundtrack tunes. Custom, top-notch music? An animated ending sequence? Miwashiba is totally spoiling us. 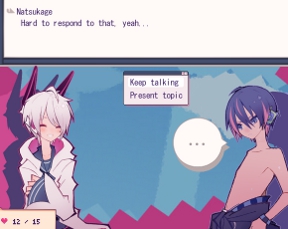 Unfortunately, the Talking Time events are more frustrating than they should be, largely because figuring out the right time to present a topic is frustrating. The game basically tells you to treat these encounters like conversations, with Minase encouraging Nanashi to act naturally, but there's nothing natural about it because there's a very specific order to present topics, and very specific points in the dialogue in which to do so. It's essentially Phoenix Wright's courtroom cross-examination problem of getting hung up on when to discuss something when the game wants you to, even though there's no real reason for you not to be able to do so at other equally viable times from a logical point of view. Later the Phoenix Wright comparison becomes even clearer when you get the option to press people on certain topics and present evidence from things you've learned to contradict them, which actually turns out to be more intuitive than the friendship-based conversations, but then a button-tapping sequence shows up that isn't difficult and yet adds really nothing to the game. It's like 1bitHeart is wavering a little as it tries to really sort itself out, throwing out new elements as plot Deus Ex Machina, and not every mechanic as as well developed as it could be.

Little things like that provide some bumps along the way as you play 1bitHeart, but they still aren't enough to knock you out of enjoying it. This first chapter isn't particularly long at around an hour or two at most, and since it mostly focuses on establishing the characters and the overarching plot, it sort of feels like you're just getting started before it ends. Still, 1bitHeart has the makings of something clearly tremendous, and not just because of how amazing it looks at sounds. The plot has definite potential, with an intriguing mystery bolstered by a cast of eccentric characters, and the world is just beginning to open up more. If you like games with a little cyberpunk flair and a lot of quirky-cute sweetness, 1bitHeart is a no brainer recommendation, and future chapters can't come fast enough!