1931: Scheherazade at the Library of Pergamum

Scheherazade "Sadie" Keating has a lot to live up to, considering the sterling reputation of her adventurous and worldly parents, and now she finally has time to do it after graduation... theoretically. She still has her courses at the university to consider, and maintain her friendships to boot. But when a thief inadvertently clues her in to one huge mystery that's been sitting under her nose all along and may hold the truth to her parents' disappearance, Sadie discovers that life after school is a lot more complicated, and dangerous, than she ever expected. 1931: Scheherazade at the Library of Pergamum is Black Chicken Studios' latest release, and an impressive visual novel simulation packed to the gills with daring escapes, shady characters, dashing heroes (and heroines!) and, most importantly, adventure. As you guide Sadie through her life after graduation, will you help her forge a bond with her family and uncover its mysteries? Maybe you'll help cement her reputation as a scholar and adventurer and find romance in the process. Or maybe you'll cozy up to a mummy. Packed with replay value and hours of gameplay, this is one massive game with an impressive array of content and excitement. 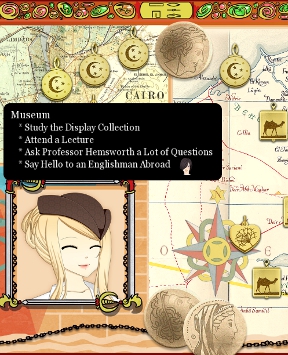 Sadie's adventure covers one year in her life, and what that entails and where it takes her depends on you. She'll travel to a multitude of different locations throughout the course of the game, including some very exotic locales, and each one is packed with different plots and activities. Sadie's success depends largely on her skills, and there's a lot of them. Everything from knowledge of the occult, to fisticuffs, escape artistry, and much, much more can and will be used many times throughout the game. You can increase these by visiting different spots or as story bonuses, but unlike most visual novel simulations, you can get a leg up on most challenges using Inspirations. Inspirations are special cards you can pick up by going different places, and you can store (initially) up to ten of them. Each one can be used only once (though you can go back and get most of them over and over), but it's worth it, since they grant large bonuses to Sadie's skills that can make impossible challenges a walk in the park.

Not that Sadie does a whole lot of strolling. She's constantly on the move, and her life is full of different stories to explore. Plots you can advance are labelled on the map appropriately, and the game will let you know what skills you need in order to succeed at them. Embarking on a quest will trigger long story scenes throughout which the choices you make determine the outcome, and they can be anything from tracking down thieves in Egypt to exploring secret ruins beneath the city, or just getting to know Sadie's friends or potential romance interests better. Some stories are part of bigger arcs that will ultimately influence how the game ends, so don't be shy about pursuing them. Especially since you can save and load the game virtually whenever you want! It's not cheating, it's... making use of your connections! 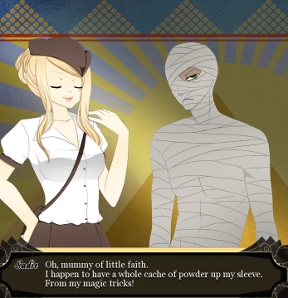 Analysis: You would think a game about a heroine who is almost preternaturally talented and beautiful and clever would come across as obnoxious, but Library of Pergamum's leading lady manages to avoid that pitfall by being both ridiculously charming and possessed of an infectious enthusiasm. It's true that Sadie's endless repertoire of one liners and intimidating intellect can wear from time to time, but her habit of throwing herself gleefully into danger for the sake of adventure and exploration makes her easy to get behind. Both Sadie and her cast of supporting characters are written extremely well with breezy, effortlessly snappy dialogue, and the over-the-top Indiana Jones-esque escapades you'll be pulled along on are remarkably engaging.

However, the game's heavy reliance on text hurts it at times. The action is never illustrated, and while characters staring at each other in front of a barely-changing backdrop works fine for chatty visits, it falls to deliver the impact that even a single visualized scene or background change would help make during action sequences, daring escapes, and tomb exploration. The other downside is that the game also has a tendency of offering you a lot of choices in certain circumstances that all seem to say or imply the same thing and don't really change the outcome at all, leaving you occasionally feeling like the game is sometimes only giving you the illusion of free will. It doesn't help matters when it can be hard to figure out how Sadie is going to deliver a response, changing an innocuous line of dialogue to something catty or flirty, or if it means what you think it means. 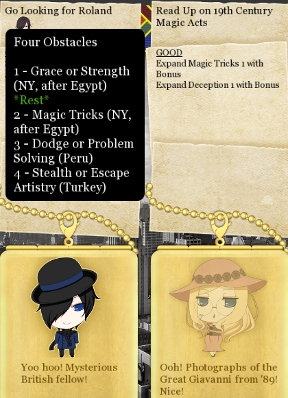 Fortunately, there is a lot of adventure to be had, and Library of Pergamum balances the bigger, more elaborate adventures with lighter stuff like avoiding the well-meaning but ever-present family butler so Sadie can get some writing done, or reconnecting with childhood friends. In fact, there's so much to do that if you try to take on all of it you run the risk of not having enough time to complete any of it, so it's better to just bite your lip and choose a few major plots to focus on at a time. Of course, since you can choose whatever order you like to tackle certain plots, there can be occasions where it feels like things happen out of order, like Sadie being stunned to see a friend in Egypt, even though he prominently featured in another character's Egyptian adventure I had just finished. The decision to add Inspirations was incredibly smart, allowing players to prepare for and tackle challenges without grinding on skills, and having all the major stories neatly indicated on the map eliminates the mindless to-and-froing many visual novel simulations suffer from as you try to trigger events. The end result is a game that's very neary as big and complex as the developer's previous title Academagia: The Making of Mages, but much easier to get into and friendlier to players in the process.

1931: Scheherazade at the Library of Pergamum might not be for everyone, with its twee dialogue and fixed heroine, but if you're a fan of the genre it's a game you should at the very least check out the demo for. It's big, vibrant, and incredibly immersive, with a campaign that will eat up hours of your time. It effortlessly captures the adventurous feel of classic novels and movies, leaving you feeling like you're on the trail of some truly huge revelations. How much you enjoy it largely depends on how much you like Sadie herself, since it feels like she's the star and you're just Driving Miss Daisy, but like the game she stars in, Sadie is packed with personality. Library of Pergamum is an enormous, globe-trotting visual novel that can keep you busy for a long, long time, and represents a massive amount of work and dedication from its talented team. So dust off your ancient texts and brush up on your occultism, and don't forget your favourite hat, because it's time for adventure... and then some!

I got this for Christmas, and I really love it. I had trouble figuring out what to do at first, but it was worth pushing through my confusion for the great writing. The writing is hilarious and I love the fun cast.

I like how you aren't just waiting around for random events to happen, the way some life simulation games feel, but you know what stories are available and what skills you need to do them.

And the stories themselves are very rewarding to go on - kudos to the writing team for engaging, humorous, interesting adventures. I finished playing and immediately started on another playthrough to do some of the adventures I missed the first time.