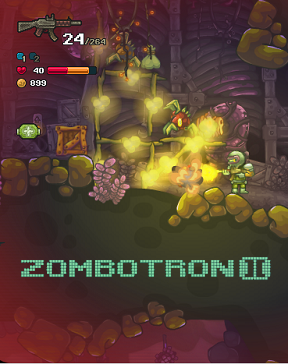 All good things must come to an end, and our mechanical zombie fighter from Ant Karlov's previous title went out just like the Wicked Witch of the East did... flattened like a pancake. Zombotron 2 puts you in the combat boots of a hapless soldier who crash landed right on your predecessor from the first Zombotron and is in a whole lot of trouble. To find a way out of this undead nightmare, you must run and gun (and sometimes explode) your way through hordes of zombies and spider creatures in this physics-based zombie shooting extravaganza. The new guy might not know what is going on, but your foes do and they are out for some new blood... YOUR blood.

Standard [WASD] keys are used for character movement while your mouse is used for all your shooting needs, from aiming to pulling the trigger. The rest of the game is set up exactly like its prequel with health, ammo and money in the upper left corner, but now with revamped graphics. You swap between the two carried weapons with the [Q] key, reload them with [R], and interact with most buttons and objects using [E]. When you are high and dry with no ammo, just use the environment to the take out enemies' with falling debris and explosive canisters. Everything you loved about the old game has risen again and has been supercharged with richer and more interactive gameplay in mind.

Zombotron 2 still falls prey to the same sluggish controls as the first, but the renovated UI, additional weaponry (like melee combat and assault rifles for starters!), and brand new spider enemy variants will help you forget all about it. The difficulty definitely got turned up this time around, too, with health draining and your body exploding gruesomely from these new overbearing spiderlings and toxic spitters. The later levels are riddled with just such danger, but the game as a whole goes for a more RPG style progression. The action game star ratings were ditched and the mission objectives for each level were moved into a more global role that can be completed at your leisure. It may take away from the replay value a bit, but it will help you to focus more on the hero's story and how the heck you are getting off this plagued planet. Trust me, the action is nowhere close to being lost in this excellent sequel and fans of the first are sure to find a rotting friend in this zombie survival game.

This game is amazing! I played for a good three hours. Its really the best there is right now in platform shooters in flash. Enemies are all well placed, some of them even attack each other. Its fun just to watch them go at it. The level design is clever and they use the physics in very good ways. Even more, its not laggy! I cant stress that enough.

Amazing game, but I wish that enemies were frozen during cutscenes. Nothing is more frustrating than opening a door, only to get killed while the animation plays. Especially if it lands you between two giants when you respawn, and they one-hit you before you can move. 20 times.

Really love this series, but I hope the developer returns the DOWN arrow = use/activate key which was present in the first Zombotron.
- please don't forget us poor left-handers who can't use the ASWD keys without a real struggle!

And agree with John about the non-frozen cut scenes. But apart from a few gripes, this game is awesome :)

This game is buggy... At one point on level 8 my gun started shooting bubbles... it took me replaying level 7 to continue without that strange effect as restarting level 8 didn't solve the problem...

. It would be nice to go back to previous levels to explore in the same condition that you left them. For example, going back to level one restarted the entire thing even though I could go back to the current level and continue as if restarting never happened.

I've also found myself in situations where I was basically stuck. I couldn't move and I had no mechanism to operate the thing that had me stuck.

Between that and the periodic freezing of flash I've just given up.

Can someone help me on stage 10?

How do you get past the yellow platform thing after you kill the 2 wolf bosses? I tried jumping on it but there isn't a large enough gap for me to fall through...

can't help you.
can't get past stage 9, that effing wolf boss and the infinite spawning baddies where you have to keep your "friend" (who is suicidal & has SHIT AI!) alive.
It doesn't help that when you die you lose your money and weapons.
Playing level 9 with JUST a handgun is impossible, dev reckons there is a secret room on level 8 where you can find a machine gun to take to level 9, I can't find it OR the chest on that level either.

Game is BUGGY AS HELL & clearly was never playtested prior to release.

Although there are plenty of bugs and questionable design choices, as well as an abrupt ending that offers little satisfaction, you can't deny that Zombotron 2 is one of the best shooters online. The game's crisp controls and polish, fantastic enemy AI, and engrossing atmosphere make it one of Jay is Games' most addicting action-adventure titles.

Computer games and education Does it work?

3,363 Views
0 Comments
jayisgames.com— Often computer games are perceived as something non-educational, especially by fathers. In their opinion, kids can better spend less time at the computer. But this gap in the perception of technology should not affect the desire of children to play...  ...

5,856 Views
2 Comments
chrpa— Jayisgames needs your help to continue providing quality content. Click for details Two years ago Rinnogogo released the escape MOMO (published in WE N°251, still playable) and now we've got the game's remake. It's different - the graphics are new,...  ...

5,860 Views
3 Comments
chrpa— Jayisgames needs your help to continue providing quality content. Click for details Yonashi's games are always good - they have simple and clean graphics and clever puzzles, and it usually takes a while to figure them out. This one isn't...  ...