Falcom's Ys series of RPGs has been around since 1987, ported to a variety of platforms and multiple titles being remade or enhanced a dozen times over. Now, one of the first makes its way to Android and iOS with DotEmu's Ys Chronicles 1, an action RPG about a young man named Adol who washes ashore an isolated island and finds himself the only one who can save the world from the forces of evil thanks to his determination to seek out the ancient Books of Ys, and his incredibly ability to defeat enemies by smashing into them really, really fast. The game is played simply enough by moving your finger around the screen, with an on-screen directional pad appearing and following wherever you go. You can tap the pause icon or your inventory slots at the top of the screen to take you to the save or equipment menus, but everything else is handled by running into things. Bump into doors and they open. Run face-first into people to initiate a friendly chat. Barrel into an enemy from the sides like a shrieking ginger of fury to attack. If you attack an enemy head-on, you'll both take damage, so your goal is always to bash them from the rear or sides. Slain foes automatically grant you cash and experience, and gain enough of the latter and you'll level up, while the former can be used to purchase better equipment or consumables such as potions that restore your health. Ys Chronicles 1 is a fast-paced, easy to pick up but hard to put down very classic RPG that will feel like a warm, nostalgia-scented bath for fans and players looking for something casual. 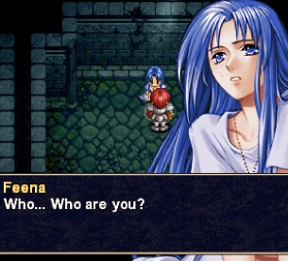 There is, of course, a bit more to the story of Ys Chronicles 1, though it's still less complex than other entries in the series. The island Adol is stranded on has been cut off from the rest of the world for months ever since a huge storm wall appeared around it in the ocean, and monsters have begun flooding the land, making the few remaining citizens hole up in their tiny towns. Adol encounters a fortune teller who bids him to seek out the Book of Ys, and while hunting for it, he discovers a mysterious girl locked away in a cell beneath a temple who has no memory of anything other than her name. As stories go, it's your typical JRPG/Anime-flavoured meal, and believe me I say that with all the fondness of someone who has put more hours into replaying Phantasy Star IV in recent memory than any modern RPG release. Ys is one of the great understated granddaddies of the genre, and it feels like a perfect fit on mobile devices. (Mostly. More on that in a moment.) Its visuals are sharp and bright, its control scheme is easy to get the hang of no matter who you are, and it has a fantastic soundtrack that blends traditional fantasy pieces with electric guitar riffs. You can save whenever you want, though the game is remarkably liberal about doing so for you as often as possible with autosaves. If you look at the genre as a whole as a buffet, Ys Chronicles 1 is pure comfort food from start to finish, especially if you think of Adol as a tiny, rage-fueled berzerker who interacts with the world entirely by smashing into it. 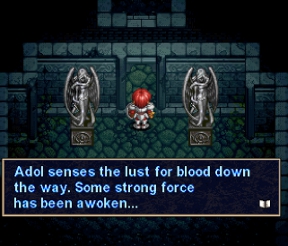 The downside is that Ys Chronicles 1 still feels a little rough around the edges, with an occasionally oddball translation, and dungeons that can be a pain to navigate because they consist of long, meandering corridors with indistinguishable rooms and little of interest. You'll either love or hate the "bump based" combat, which feels like the sort of thing that should be powered entirely by mighty yells. On the one hand, it's fast and strangely entertaining, a simplistic hack-and-slash that doesn't demand a whole lot of skill on the player's part to enjoy. On the other, it's perhaps too simple, with most boss battles over in a flash, and the biggest difficulty being a lack of customizable controls so you're stuck with the directional pad that always follows your finger... sometimes right off the screen. While there definitely feels like there's room for improvement, however, and not everyone will enjoy the game's frenetic bash-based combat (we call those people killjoys), there's still a lot to recommend about Ys Chronicles 1, especially if you're a fan of classic action RPGs to begin with. Its breakneck combat is fast, simple, and fun, and the big maps are a pleasure to sprint across hunting for treasure. While the story isn't without seriousness, the overall tone is still very light with an emphasis on recreating the feel of classic adventure. Though it lacks the depth and overall difficulty of some other games in the series, Ys Chronicles 1 still serves up a breezy, engaging little old school gem that fans will love being able to take with them wherever they go.