Wonderland Secret Worlds is an isometric puzzle adventure similar to Mr. Robot. In it you take control of several characters who push boxes, flip switches, roll boulders and build bridges to make it to the exit in each stage. The setup is nothing new in the casual gaming world, but somehow the combined package is an extraordinarily fun play. If you don't mind the dated visuals and rather cutesy presentation, Wonderland Secret Worlds will be one of the most enjoyable and satisfying games of its genre you'll ever dive into. 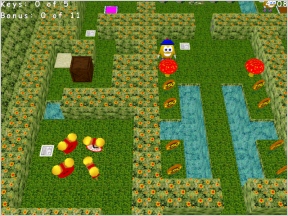 One day in the realm of Wonderland a dark storm covered the sky and shook the seas. The wind carried all the little Stinkers away, leaving only Stinky and a few of his friends behind. Stinky immediately sets out on a quest to rescue the little ones, his friends joining him along the way to help solve puzzles.

Wonderland Secret Worlds follows a very simple setup that everyone should be familiar with. Each level contains a gold star sealed behind a metal gate. To unlock the bars you must find key tokens scattered around the level. To get them you'll need to shove boxes into the water to make bridges, step on switches to open barriers, push heavy objects onto round buttons to hold them while you pass, outsmart enemies and much, much more. The game introduces plenty of new twists and turns as the levels progress, keeping the experience fresh and interesting for hours on end. 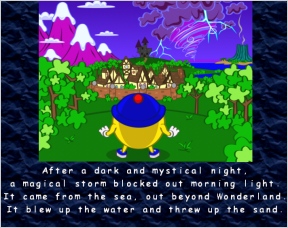 Analysis: More often than not, this style of adventure game tends to get on my nerves. Color-based button/gate puzzles usually frustrate me because I already know how to solve them, so why should I go through the motions? Isn't that more of a chore than play? That's certainly not the case with Wonderland Secret Worlds. The game manages to preserve a sense of joyful puzzle solving even though it employs well-used gaming conventions at every turn. Yes, I had to slide a box across a narrow bridge while avoiding fire cannons just to hold down the red gate button so I could collect the blue key that allowed me access to the green button that held a token, but man, I had fun doing it.

The only drawback to Wonderland Secret Worlds is its dated visuals. Games used to look like this more than a decade ago, with stiff 3D models and blurry, repetitive textures on every tile. The game doesn't look bad by any standard, but it's an acquired taste every gamer might not find as appealing.

Cheers to Shalar for letting us know about this one!

Wonderland Secret Worlds is available to download from these affiliates:

Mm. I think it would be better to feature one of the NEWER Wonderland games, like Wonderland Adventures. Much less dated graphics and better puzzles.
Not that Secret Worlds is bad, just old.

I have Wonderland Adventures, it is awesome, with an entire world to explore, magical powers to learn and master and quests to do. The puzzles and levels are everywhere, and there's even a shop where you can find all sorts of items. And the graphics were very satisfying, colorful and cartoonish, but not tiring or dated. In my opinion, you should have reviewed Wonderland Adventures, which I suppose (haven't played Secret Worlds yet) is a better game.

This is what I think.

We'll soon feature a review of Wonderland Adventures, too.

I guess at least one installment of Wonderland needs to be reviewed here. The thing is... I've always hated this game...

From the snapshots, this game appears to have true 3-d graphics, not isometric graphics.

[Edit: If we're nit-picking here, then I'll point out that the term "isometric" is used to describe perspective not graphics. -Jay]

Usually I don't mind it when cute games hide deviously evil gameplay. But for some reason, I wish a violent death upon that smiling little...what is that thing, anyway?

I guess I should stay away from puzzle games once I know they require reflexes beyond my capabilities but...I know what to do, damn it!

Actually despite the look of the game I'm actually finding this rather enjoyable. The puzzles are definitely of a good standard from the offing and it's quite nice to regress back to the 90s feel of the whole thing.

Liked it enough to buy it anyway.

Shall check out the Wonderland adventures too, thanks for the suggestion!

I played several of the Wonderland games, including Adventures, but I chose to feature this one because I liked it best. :-P Like Jay said, don't be surprised if you see a review of that game in the future, it's great and just different enough to warrant its own space.