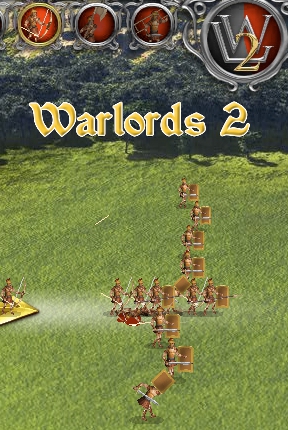 The right edge of the game window. So close. So tempting. It must fall beneath my mighty little fighting units. No matter how many units the other side sends, the right side of the screen WILL be mine! Also, demons. Warlords 2: Rise of Demons, to be exact, a sequel to the smash hit original warfare game from Ben Olding. With ten races and 54 possible units for your strategic assaults, those demons, and the right side of the screen, are totally going down.

Controls are simple. Between levels, use the mouse to upgrade and buy units, and to choose a territory to attack on the map. During levels, Use the [left] and [right] [arrow] keys to switch between potential units. Units are on timers, so the massive and lumbering giant troll unit takes 8 times as long to prepare as the quick and easy spearman. Once you decide on a unit and the timer counts down to ready, your arrow on the battlefield will turn yellow. Use the [up] and [down] [arrow] keys to decide what row you want and then hit [spacebar] to release your unit. There he goes, toddling off for the right side of the screen. Brave little chap.

Certain units can be upgraded so that they have a special form which requires waiting for their timer to fill up twice before launching them. In these cases, units can be launched as the normal version when the timer goes around in red, or you can wait until the timer goes around a second time in blue to launch the special version. As you kill enemies, you'll charge a meter which will allow you to unleash one unit of a given kind in every row at once by pressing [Q]. Once you've overrun your enemy, you'll be rewarded with gold depending on how fast you beat the level and how difficult it was, and sent back to the unit menu. Buy or upgrade something, hit the map and choose a new target, and wash, rinse, repeat! 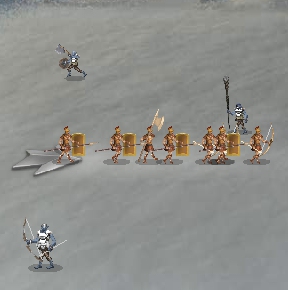 Analysis: According to the game designer in the time leading up to the release of the game, he intended to weaken a certain mindless spamming technique that allowed a savvy/lazy player to coast through the first game with ease. However, the fundamental principle of the technique still works in Warlords 2. It's just tweaked to be more of a mindful spamming technique this round. Truth be told, I don't find this that much of a weakness. You can still play the game as it was "meant to be played" if you want, and fall back on the technique only when you get frustrated. Players like to find game breakers, anyway. Imagine if you were playing a perfectly balanced fighting game. Why, you'd feel as uneasy as if the calls were coming from inside the house.

The original was pretty much plot free other than the implied motivation of world conquest. Warlords 2 has some really lovely voice acting in its introductory and victory sequences, but the problem is that the scenario makes the gameplay seem like a series of spectacularly bad military decisions. What strategist's first reaction to the news that a hellish race of demons is preparing to rain down extradimensional summons is to preemptively attack every other innocent territory around, on multiple fronts at once to boot? I know that it's a bit of a cliche in the gaming world for gameplay not to return story's calls or read his emails, but it didn't have to be this way. A sweet little megalomaniacal fable where you, the player, are told you're going to march over and take everybody's else's right-side-of-the-screens because you don't like their face or the way they cut their cucumber sandwiches would have suited the gameplay down to the ground.

That said, what you have here is an already great game that has been further improved in basically every respect, and that's nothing to sneeze at. Sure to please fans of the original and lure in fresh meat, I mean new ones.

Does anyones shamans work? I played wood elves, and they never did do a thing, although I did pay a fortune on their spells.

joye, thank you for your plot "logic" analysis, I think it's an important thing to at least comment on holes like big crates even in games. It's so often too much missed in game reviews.

Hi, this is Ben Olding, the dev. Thanks for the review! A nice thing to see at the end of the day :)

Just spamming one unit will not win you the entire game, and indeed if you put difficulty on hardest then there is no one single unit you can spam to win. However there are some combinations that can be sent down one line which can win. I think that's a valid tactic and is ok.

I just wanted to mention that the magic casting problems are caused by the encryption (to stop decompilers) breaking something. I have found the problem and hope to have it fixed (along with a couple of others) tomorrow.

This looks pretty cool. Unfortunately, the Flash display is going blank as soon as the first unit gets sent onto the battlefield (doesn't seem to matter which race I use), and not recovering.

[I'm going to go out on a limb here and blame Flash. We have had an epidemic of reports similar to this one lately, and the only thing that's changed is all the Flash Player versions Adobe has been pushing out lately. Try a different Flash Player. -Jay]

Though there might not be 1 unit in which you can spam to win the game, in the end, I found it to be rather effective to simply concentrate my efforts on a "core" unit, which in my case was the scythe whirler. Swordsman in general tend be very strong, and have few "weaknesses" besides the basic halberdier, which has low armor and generally cannot compete against the higher level units except in high numbers. And the strength of waves in general means that you rarely want to lose more units than the other player.

As you fight more enemies, the other armies get stronger. Note that though fighting harder enemies means that you don't have to face them when they get really tough, the time bonus is often a substantial proportion of the reward.

There could have been more special attacks, as in general I found them unremarkable except in few rare situations.

An odd thing I found was that though you can technically fight and kill the demons from the start, you do not "win" until you conquer all the lands.

Maybe the plot is spot on after all, if you suppose you are a mad, powerhungry goverment. Who uses the demons as lame excuse to ensure world domination. Human history is full of this lame excuse examples...

fuzzyface, yeah its supposed to be that the rising of the demons has an effect on everyone in the land causing them to be less tolerant than normal rather than just trying to beat the demons. You could argue that if the demons are beaten then everyone else would go back to being peaceful, but i think once a war is started, it may take a while to stop, even if people arent quite so agitated.

The magic casters are still not working! This is unbelievable.

I'll be damned (pun) if I can't get through anything higher than 70% now. I've got six battles left and no matter what I try I can't get by them.

I've tried concentrating on one or two main guys, picking up another one or two to fill in, but especially on the castles, it seems that no matter how I load up a line, the very next move after I send a ladder is a bad guy with a big sword or halberd and *lop* there goes my ladder.

It's danged frustrating. I'm close to armoring everyone up, but will that even do it? I'm only on normal. Surely I can't be this bad at the game.

Umm... are units not supposed to battle eachother? I chose the high elves and went against men of the west, my spearman takes a poke at a javelin thrower but then they just walk right by eachother. this is pretty much the case with all units. if they dont move slowly enough to get in enough hacking for a kill, they just walk by eachother. Is that how its sposed to work?

Just a little heads up, the AI seems unable to handle Assassin spam. They attempt to counter it by throwing their most powerful unique unit (giant troll, Giant Demon, etc) at it. 2 Assassin hit will fell either of these guys =D.

They don't really seem to know what to do.

Question, what is the 10th race? I unlocked the demons, beat the game with them and still have 1 race to unlock. Did I miss something?

In fact, there is a super overpowered unit in the game that can be effectively used to win the game on hardest mode. Using the Men of the West's shieldman in numbers can take out anything due to their immunity to arrows and well rounded stats. When they bunch up in one line they take down, even, axemen rather easily.Even giant units such as the ogre could only take out 4 men before being brought down

to unlock the third race you just have to beat the beat the game 3 times (i think with different races, but i am not sure)

Even on the hardest mode, a handful of early battles can be won by spamming with spearmen and/or swordmen. The preparation time for the more powerful classes prevents their use in an automatic-win spamming strategy with the exception of the Men of the West's shieldman (as Kendall mentioned above). That's basically a bug; lengthening the shieldman preparation time would fix it.

I won the game on the hardest mode using the trolls. When the computer deployed a class, I would counter with the most advantageous one (e.g., swordman counters spearman). The rest of the time was spent running scouts across the battlefield. For me, the melee combat was just a diversion for getting scouts through.

For castle sieges, I sent in the troll giant with the ladder-carrying guy behind him. The giant kindly pounded on bad guys coming out of the castle as my long row of spearmen climbed up the ladder. Of course once you get a wave of giants ("q" key), the battle is soon over.

I also won on hardest mode using the Arnolds, though that doesn't really count. The Arnolds seem to be intentionally overpowered just for fun.

Honestly, why did they call the final race Arnold? And how come they don't have a back story? Also, they are powerful because thy have effing guns.