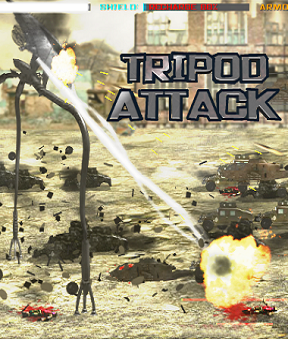 The end of the world or apocalypse scenarios are something you see played out a lot in video games, but a classic spin like this is refreshing. With a hint of Orson Wells's War of the Worlds, Anegmetex Software's Tripod Attack puts you in control of the invading alien machines as it tears through the human resistance in this action game. The human race will throw everything its got at you so your mouse hand better be ready to wipe them out.

Your laser is the only weapon you have and you activate it by clicking the left mouse button. The laser aims wherever your mouse cursor is so hold down the button down for some extraterrestrial destruction. The tripod is on a fifteen day conquest where each day ends after you destroy 100% percent of the militant population. The game is pretty brief at fifteen levels so it will only provide a minor distraction, but a challenging distraction nonetheless. The visuals are top notch for such a small flash game, but with great visuals come tons of blood and violence. Upgrading your tripod and choosing your targets carefully each day of your conquest adds more depth to the short experience so taking over earth isn't too boring. The fate of earth is in your metallic pincers and they are not looking to shake hands.

Definitely pretty easy, but the pretty graphics and the slow curve make it a lot of fun!

There are a few bugs roaming around in this. I had to reload the game twice because, if I upgraded from the level-select menu, I sometimes couldn't get back to select a level to start with. When reloading, I'd typically be set back a bit (both in accessible levels, upgrades, and credits). Just be aware, and avoid upgrading from the level menu.

Otherwise, it is a surprisingly fun game. Pretty easy, but lots of fun!

Switching everything to x2 on the cool menu is rather fun.