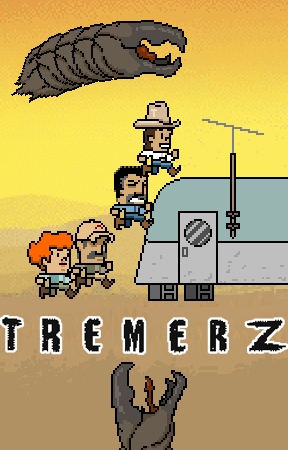 The town of Perfection is under siege from underground worms rearing out of their Hades abyss and chomping down on the surface dwellers! If not for the actions of two local repairmen, everyone could be mauled in the fitting homage arcade game Tremerz!

The controls could not be simpler: just move your mouse, clicking to jump. Taking charge of Kevin Bacon (or Valentine, if you want to be like that), you have to collect the town folk and dodge the attacks of the worms, which are hurtling themselves at you from out of the ground. With each character you add to your posse, it gets harder since the group concertinas when moving. So a pack of four survivors clears a worm more slowly than three or two. Running sideways along the landscape, whenever you rescue someone, the worms attack, leaping out of the ground at different angles, poking their heads out for a opportunistic snack or rumbling along the surface towards your feet. Every screen has more intense and quicker attacks, culminating at the edge of a cliff. The aim: try and save as many of the characters as you can. Making it to the end with just Kevin is easy. Making it with the whole population is a lot harder.

The worm behavior is consistent with what we have seen in Tremors, a documentary from the early Nineties where these worms were first identified. There have been a few subsequent video studies on the phenomena, but they are worth ignoring. All you need to see is the the first outing. It also adds to your prowess in "7 Degrees Of Kevin Bacon", as you now know that he starred with giant man-eating worms. You know, in case you needed to connect to another movie starring someone else and the same worms. Or if you are playing "7 Degrees Of Predator Worms" and you need a Kevin Bacon link. What I am saying here is that your life is a lot poorer for never having watched Tremors.

That is the main selling point behind this game. At its heart Tremerz is really shallow, pretty pointless and far too easy to merit a mention (to be fair, it was made in 24 hours for the Kevin Bacon Day on Newgrounds). But it's a homage to one of the best creature-feature movies ever made and it is done well, enlisting the talents of Newgrounds demigods Tom Fulp and Johnny Utah (and music by MidiMachine). The fact that nobody ever made a Tremors game makes the existence of this mini-romp inevitable, while the throwback graphics just drive the point home.

It won't take up more than a few minutes of your life, failing at the one area where Flash games ought to excel - eliminating vast chunks of our meaningless existence. But its failure to keep you consistently oblivious from reality is totally covered by the fact that it reminds you to watch Tremors again (and the reason why we yanked this from Link Dump Friday oblivion). In that light I could only find three real flaws with Tremerz: the absence of Rhonda and Walter's characters, a worm cruising past with a jackhammer stuck in it, and a bonus stage where you play as a survivalist couple in their basement opening fire on an invading worm like it was a seaside village in Apocalypse Now. Ah, the memories, the memories...

Then I kept playing, and I really didn't like it.

Then I kept playing, and I got past the pogo girl level.

and then I liked it!

It's pointless...couldn't find a way to access the medals...controls are weird.

...and it makes me laugh out loud like a little kid, and I keep going back and playing it over and over again.

i agree with the general tone of comments here... don't know exactly why I came back to this little diversion three times already, but I did. great little time waster. can't believe it's over when it's over, though. I feel like the developers just gave up at the end of level one.

The medals are for NewGrounds. You have to go to Newgrounds to view them. It's a pretty silly thing, since the medals don't give any indication of this.

While it's not a very great game with anything new or brilliant to bring to the table, it's short and simple. That pretty much sums it up as a worthwhile way to spend a few minutes of time.

This game is so stupid that I like it!

The first time I played this, I had a good chuckle when I

walked right off the dang cliff.

I am glad James covered this game in detail, and I understand that there are a few things that are missing in this game like the absence of Rhonda and Walter etc, but you got to remember that this game was made in 24 hours straight and for that, this game deserves a lot for the quality of the outcome.

Johnny Utah who was one of the crew who worked on this game explains how the game came into being (Note: post contains language) ref: http://johnnyutah.newgrounds.com/news/post/455766

I tried making a game in 24 hours straight and I have to say its is a big feat to really pull of a good quality game from start to finish, which has good game play and a hook to play the game again for the silliness of the theme for that day (April 1st 2010 on newgrounds was Kevin Bacon Day).

It would be amazing if, as you went on, the enemies would start to include different stages of the graboid life cycle, adding shriekers, then *ss-blasters, and finally ending with a boss encounter with El Blanco.

4,412 Views
5 Comments
chrpa— Jayisgames needs your help to continue providing quality content. Click for details Welcome to Mobile Monday! The first comes an adventure escape from a pyramid by playPLANT (LIBERTY PLANT Inc.) and it's an exciting one - the pyramid collapses...  ...