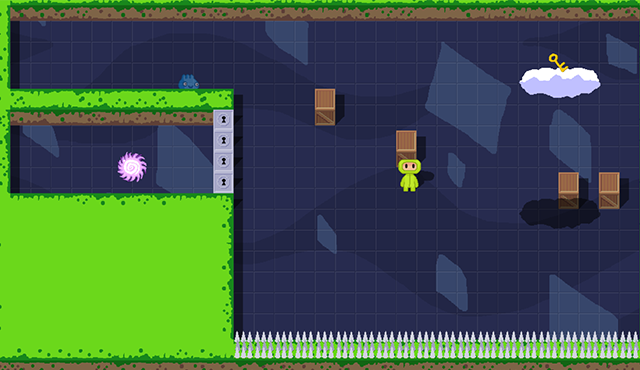 The plot resolves around Toodee and Topdee's worlds colliding because there's a missing semicolon in the code. A lovely floating person made out of code named Glitch tells them this news, and they both have to get out there, in search for the missing semicolon.

You can move around with the arrow keys, and use the Z key as an 'action' key. For Toodee this means you can jump, for Topdee it means you have to press Z to push crates around. If you need to swap characters, just press the X button. The levels are beautifully made, in a way that you really need to swap your 'thinking cap' when you try and solve these puzzles. Sometimes you need to create platforms for Toodee by pushing crates in a certain way by Topdee. Other times you need to fill up holes with those same crates, but no matter what you do, the main goal is to get both little characters to the portal. Now go on! Go and help these buddies finding the missing semicolon, so both game genres can live in peace again. And far away from each other.

6,552 Views
3 Comments
chrpa— Jayisgames needs your help to continue providing quality content. Click for details In a popular Neat Escape's restaurant you went to the restroom, and stayed there. Not voluntarily. You order is being prepared, you're hungry and thirsty but you can't...  ...