When the princess needs to be rescued by a brave hero (or heroine!) there's nothing to do but take up sword, shield, and... uh... scruffy white dog? And... match-3 gems? Wait... there's nothing about this in Tolkien at all! Undefined takes a cue from 1000000 to create the fast-paced addictive arcade game that is Token Hero! Rescue NPCs to join your cause, build an airship, and look at the clock and realise you should have been in bed two hours ago holy gooses. 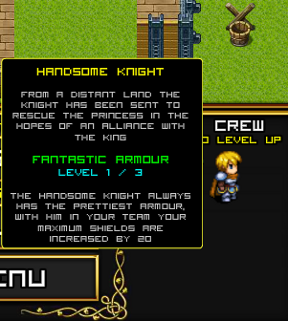 Your goal in each dungeon is to make it to the end before time runs out. At the bottom of the screen is a field filled with different tokens, and you can drag them around with the mouse however you like to create matched sets of three or greater. As you run down each dungeon corridor, different obstacles that require different matched tokens will appear in your way. Chests and doors need a certain amount of keys, while monsters need swords crossed to defeat them, and matching shields and hearts defends and heals you, respectively. Power-ups will be added to your inventory to the right of the screen and can be activated with a click. As you match gems and defeat bosses, you'll earn cash you can spend on building your airship, or leveling up the various companions who join you... each of whom adds a unique bonus!

Make no mistake, while Token Hero is vastly different from undefined's previous options and offers considerably less strategy, one thing remains... it is grind-tastic, and the sort of "just one more dungeon" adventuring that's dangerous to your sleep and productivity. Though the story basically slips discreetly into the background in favour of bombarding you with pretty explosive colours and the particular satisfaction you get from watching numbers climb, the fast-paced gameplay is just as addictive here as it was in 1000000, and with a few little twists and considerably more personality to make it stand out. I can't say I cared for the repetitive, relentlessly optimistic soundtrack that made me feel like I was trapped in a 1960s after-school special ("Tonight, on a very special Dungeon Cralwer..."), but the bright visuals and cheery design carry home the fun, casual vibe the game is going for. It's not particularly deep, but Token Hero does what it does quite well, even if it's something we've seen before.

One crucial gameplay note: gems and tokens are two different animals, with

gems potentially turning into tokens. They correspond, and stuff.

The mouseover descriptions of in-play power-ups are a little long-winded, so I recommend hitting pause to read/familiarize.

Normally I would balk at match-3s with click-and-dragging, but I immediately spotted it as an extension of Quick Quests ( https://jayisgames.com/archives/2011/10/link_dump_friday_235.php ), that horribly, horribly addictive hybrid wherein five minutes turns into five hours. The framework's recognizable with elements/storyline remixed, retaining everything except the fact that Token Hero has *all* of its dragons... For best results:

Collecting shields works just like QQ, in that it appears you don't experience damage until your shields fail. (I'm pretty sure this is the case, some of the interface mixes me up.) So unlike swords, the shields can be stockpiled.

You also might be able to get more buffed-up token drops if you clear more of them (i.e. when you don't need them), but the frequency of these bigger drops seems uneven -- may or may not be worth it, depending on the situation.

Mechanically speaking, it works a ton better than most mash-up match-3s because out of the corner of your eye it's easy to see when the party stops moving. Difficulty and power-up scaling is nothing to write home about -- though they may matter more to beginners. (And lovers of cute ickle graphics, which is the secret heart of these two games.) The nimble-fingered may be able to take the best available matches at all times, and only worry about targeting when combating bosses.

The thing is -- is there a quality toggle I'm missing? Because why, why, why is this feast of retro graphics laden with COMPRESSION ARTIFACTS. No. No, no. It makes baby Shu cry. From her eyes, which only see how disfigured these 1K graphics are. There aren't many games which successfully mix gradients with pixel-art, so to see this accomplished, and then presented like so? It boggles me because Quick Quests was perfectly fine in this respect. Risk the extra load time, please. I'd much rather break my computer over Jungle Magic ( https://jayisgames.com/archives/2009/09/jungle_magic.php ) than this.

What do I do? I can't figure out what to do on the very first screen - pressing the 'adventure' button doesn't seem to do anything.

While this game could be a little close to 1000000 for comfort, I kind of like it. The one major problem is the difficulty curve, which is basically nonexistent until you hit an absolute wall at around 18 and 19. This wouldn't be a problem if you could go back and grind for upgrade money. Unfortunately, at that point, the upgrades cost 150k+, and the "reward" for re-completing a dungeon that initially gave you 100k is a measly 10k. I'm not going to run a 5 minute dungeon 10-15 times for a single upgrade.

@Mantus I didn't have to upgrade that many times... I only repeated dungeons once or twice, until the last one on the mainland. Make sure

powerups get you a good return on gems:gold

that may make a difference.

I did have to grind at the very end, but the levels are easier in part because

there are no bosses after you complete the game, just a really well-locked treasure chest.

Oh! Okay, now I get it. Clearing gems will give you gold. The reward at the end is more like a bonus. If one is good at match-3, it's no more than 3 or 4 plays to get up to the next upgrade level. At most, in my estimation.

I believe I encountered a bug while completing one of the higher-leveled dungeons. I was battling the boss of the dungeon and used the "treasure box" item that consumes the board and replaces it with new pieces. Only when the new pieces dropped, some spaces were still empty and I couldn't even make any moves. Every other button worked but it was as if the game board "broke". I was forced to lose or just quit the dungeon. It only happened once but I didn't react fast enough to take a screenshot of it.

The final (I hope) boss is just killing my wrists. I'll have to give it another try, with a tablet, once the swelling goes down.

*It wasn't the final boss.

5,032 Views
7 Comments
chrpa— Jayisgames needs your help to continue providing quality content. Click for details We escapists got our first Christmas present, a new game from Masa - and it's great! You find yourself in front of an elevator, which you'll get...  ...