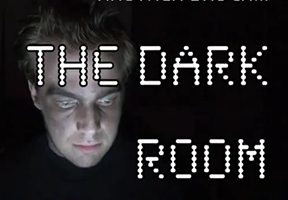 To put your mind at ease, you will not be eaten by a grue in The Dark Room, but as you struggle to escape from this fiendish and hilarious YouTube-based puzzler you'll probably meet with a number of other unfortunate ends. Such as accidentally gouging your own eyes out, electrocuting yourself on a light switch, or growing a really unattractive beard. And all the while, you'll have to deal with the taunts of Australian comedian John Robertson, who has some choice words for your promiscuity with walls after you grope in the dark for the light switch. "Now even the walls don't respect you. And they are capable of respect, but not for you. Not anymore."

At the risk of tautology, dark room is dark. You can't look around. You can't check your inventory. You can't go north, or to Southampton. You could try weeping, but that might not get you very far. You can't even see your own tears. It's a dark room. You might try thinking outside of the box, but... "Thinking outside the box would only help if you were inside a box, but you're not, you're here. In The Dark Room." 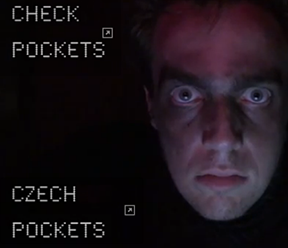 If you've never played a YouTube game before, the game relies on annotations (pop-up links) to lead you from video to video. Most of the endings require nothing more than a determination to click everything clickable and a sharp eye for hidden annotations, but the "100% Best" ending does require downloading a certain video and performing some basic editing on it, something that is possible to do with freeware you may already have. (Without spoiling too much, the "Best" ending isn't actually that good for you as a character, as you might expect from the sadistic host, so the satisfaction of it is more the sense of accomplishment.)

Robertson made the game as a clever self-advertisement for his comedy shows, and for the most part it functions to advertise himself simply by being wickedly funny. There is one video labeled "sell out" that is an explicit advertisement, giving dates and locations for upcoming shows, but you can certainly just skip that video if you're not interested. The language is fairly salty, and there is described violence, but visually the game isn't offensive, so you'll be alright with headphones on if you have to consider others in the room. The experience is somewhat akin to You Find Yourself in a Room but the antagonist is rather a good old-fashioned human bully, albeit wittier than most. Robertson has also been adding more content, such as a Valentine's Day section, and the "Best" ending promises a sequel, so this is definitely a game to watch. But you can't watch.

Because you're in The Dark Room.

Not in Kansas Anymore:

Alright then ("good" in the sense of "hilarious"):

This requires you to download the video "Turn Around Redux", and either reverse the entire video or just the soundtrack. How you reverse it depends on your system, you can use a free editor like Audacity or you might have a program that will do it already on your computer. Listen to it and you'll receive a clue, although the clue actually has an error, and you'll need to capitalize the last letter.
How to get to Turn Around Redux:

Direct link to Turn Around Redux:

Direct link to the ending (use only in case of insane need-to-know-itis:

Thanks, joye, for the walkthrough!

Not in Kansas Anymore:

Alright then ("good" in the sense of "hilarious"):

This requires you to download the video "Turn Around Redux", and either reverse the entire video or just the soundtrack. How you reverse it depends on your system, you can use a free editor like Audacity or you might have a program that will do it already on your computer. Listen to it and you'll receive a clue, although the clue actually has an error, and you'll need to capitalize the last letter.
How to get to Turn Around Redux:

Direct link to Turn Around Redux:

Direct link to the ending (use only in case of insane need-to-know-itis:

Thanks, joye, for the walkthrough!

The walkthrough was really necessary, too much options for me. But.. I watched all the endings! Fantastic "game", really, really funny!!

the "100% Best" ending does require downloading a certain video and performing some basic editing on it, something that is possible to do with freeware you may already have.

I've never done any video editing in my life. Should I entrust myself to a Google search, or do you guys have any recommendations?

[Give Audacity a try. It's open source, cross-platform, and free. -Jay]

I didn't know Audacity did video editing! I thought it only did audio editing.

It only does audio editing, but only the audio section contains the clue, so you can solve the puzzle by only editing the audio.

I love this so much XD

The idea alone deserves 5 mushrooms. The guy's good, he does it well.

For someone who grew up on Ian Livingstone - Steve Jackson books, it gets boring after a couple of minutes, and the fact that you seemingly can get into loops from which there seems to be no good way out should be dealt with - but this one's still a great idea.

Hilarious! And thanks for the walkthrough; I blew past some vital without realizing it. A hint for the impatient people like me:

Watch the entirety of the videos!

Oh, and another option for outside software:

Command + left arrow key in Quicktime lets you watch a video backwards (just make sure the file's compatible). It comes with all Macs, but I don't know about PCs. I think there's a free version for download on Apple's site

I can't believe I spent a good hour playing through all of the options in this game. I was sure I quit after the first three failures, but that might have been five playbacks ago...

It did take me a while to realize that I haven't had a good "choose your own adventure"-style romp for a while. I even wrote a basic one myself way back in college (early '90s) for an HTML class I was taking.

Now I can understand how the color-blind feel about color-based puzzles in escape games.

I'm deaf, so playing this one is out of the question.

If you like this type of thing, Neil Ciciriega did a nice Choose-your-own-adventure on Youtube called The Haircut.

It's not as tricky as the Dark Room from a game standpoint, since all the choices are very clear cut, but it has the bonus of being in the form of a very catchy song with fun cartoon illustrations.

It was kind of funny in the beginning, but the game itself isn't much fun so I lost interest quickly. Worth checking out, though! :)

There's a second part out. Worth mentioning.

[We mentioned it in our latest Link Dump Friday, and we'll be updating the walkthrough soon, too. -Jay]

Has someone solved the hidden message in the updated, second part? I've got a really good start on it, but some hints to some specifics would be nice...

The riddle at the end of Part 2 is really frustrating me... Any one got any ideas? :(

That part's to be expected though. Any ideas for the part after that? Because I'm clueless.

@Meterman70 Don't feel too bad. I wish I had not attempted to play. While it may be funny for some, it took about two minutes for the loud voice yelling at me to give me a migraine. :(

This walkthrough is out of date! There is now.... *sighs* A second Dark Room. There is only one person to have supposedly reach the end (and it is not me).