Lonely Susan makes a choice to end her life, but the hard road she has to walk is just beginning. Her death takes her to surreal in-between realm where one very old woman would make her an offer few people could ever dream of. But whether or not she accepts the terms, Susan's newfound lease on life is about to get a lot harder and a lot more nightmarish than she could ever imagine. In The Cat Lady, a dark horror indie adventure from Studio 7 and Harvester Games, reality will begin to blur. Susan has been tasked with hunting down and eliminating "Parasites", five ruthless psychopaths plaguing her city, whether she wants to or not. But is she really some sort of supernatural vigilante? Or one lonely, unbalanced woman who is beginning to crack? Please note that some players may find some of the scenes and themes in this game upsetting. Player discretion is advised. 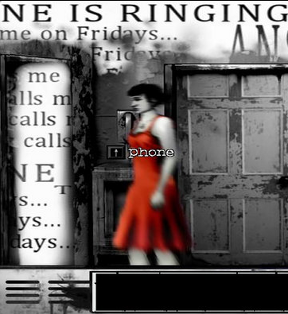 Use the left and right [arrow] keys to move, and the up [arrow] to interact with something when given the option. Tapping the down [arrow] opens up your inventory, from where you can use any of the items you obtain, hitting [enter] to get a list of options. Coincidentally, you'll also use [enter] to select choices in dialogue, which can have some significant impact on what you see in the game, so spare a little thought whenever given an option. Come chapter three, you'll be introduced to a new mechanic... a red gauge that reacts to Susan's current mental state. It goes up whenever she gets upset, and if it reaches the top, she'll suffer a breakdown. At the same time, you'll also get a blue gauge that increases whenever Susan is happy.

As Susan, throughout the game's seven chapters you'll not only have to deal with the threat of other people, but also the way reality rarely seems to stay cohesive around you for long. You know how it goes. One minute you're laying down for a nice sleep, the next you're staggering down the hallway towards a massive, bleeding heart whose juices you can drink. But just because it seems unreal doesn't mean it can't hurt you, so proceed with caution even when it seems like the only way forward is going to hurt. Since Susan's newfound resurrection means she can't die, however, or at least not permanently, you'll probably have to endure a lot, both physically and psychologically, in order to proceed.

Analysis: The Cat Lady is one of those games that can have you staring at the screen in bafflement one moment and cringing away from it the next. You'll be lulled into a false sense of security only to have the thing lunge at you like a yowling horror. Susan's resurrection towards the end of chapter two is startling to witness, full of howling anger and rage. Though it takes a while to really open up and feel like a cohesive narrative beyond a sting of unexplainable events, once it gets going, the story expertly plays on your emotions. You'll go from sad and introspective, to tense and frightened, to angry and vengeful all in wild unpredictable swings, and the story's almost cinematic progression will keep you glued to your seat when you're not jumping out of it. Players who prefer sensible narratives that don't keep you in the dark for very long may find this one hard to take at times, and whether the game handles its subject matter properly is largely up to you. It also elegantly manages to illustrate Susan's depression with remarkable effectiveness... everything from her conversations with a doctor, to the things that subtly influence her mood, serve as a delicate yet realistic exploration of just how real and unpredictable depression can be. 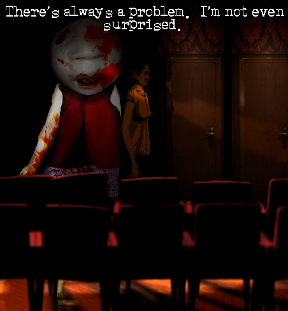 While Susan doesn't really have too much choice in the matter of killing the Parasites after her, early on you can choose to refuse your mysterious benefactor's help, and I personally found doing so more rewarding. Not knowing who you should trust makes the game an incredibly tense experience, adding a layer of almost palpable paranoia to every interaction and setting. It really helps you to put yourself in Susan's shoes, upping the tension considerably, and for me at least, it made one scene particularly shocking when I discovered I had been suspecting completely the wrong person. It's a nice touch, since a lot of the other choices in the game feel essentially cosmetic... if I can't continue until I talk to a dude, why do you give me the option of not talking to the dude at all? From a gameplay perspective, it has the sort of "use PRECISELY this item on PRECISELY this object" adventure-game logic, which is somewhat exacerbated by the dreamlike surreality that infuses everything.

From an audio perspective, the game is a bit of a mixed bag. The voice acting definitely isn't bad, but some characters gain and drop accents for no reason whatsoever, and in more than one instance the emotional tone used to deliver a line doesn't go well with the text or what's happening onscreen. Fortunately, this is bolstered by a stellar soundtrack... moody, atmospheric, and perfectly suited to whatever is going on at the time. This is also true of the visual style. It's sketchy, dark, and surreal in a way that won't be everyone's bag, but lends itself to some surprisingly effective moments. There was, for example, a scene that made me shiver when Susan actually turned her head to look right at me as she spoke her line... though that was somewhat undermined by the fact that she immediately got stuck in that position and spent the rest of the scene walking around and talking to other characters while giving me permanent stink-eye.

Violent, discordant, and incredibly dark are just a few things you could call The Cat Lady, and this is definitely not a game for everyone. Despite the content, we ultimately decided it was a strong enough game and narrative for consenting adults to use their judgement on whether to buy, download, and install it, so caveat emptor. While the game frequently wields its startling scenes to devastating effect, there are at least a few that feel not only gratuitous, but pointless, as they serve no other function other than to make you flinch in a way that cheapens the rest of the experience. It's sort of a personal choice you have to be able to make for yourself... is the concept of an experience like Kill Bill by way of Silent Hill okay as long as it doesn't cross the line into sexual violence? What about suicide? Then The Cat Lady might be a step too far for you. But if you're looking for a dark, unreal horror adventure that will keep you guessing as often as it makes you cringe, it's well worth taking a deep breath and experiencing.

I'm not sure you can call the red/blue gauges a "new mechanic", considering they appear for one scene and are then never used again.

Yes, but they're a mechanic that is used in that scene, and I thought it was important to highlight them. :)

Well, that much is true!

Wow, I'm glad you guys chose to review this game because I personally really liked it (when I watched it in an LP).

It's a good game.

Although it isn't really horror. It starts like one, but quickly becomes something like torture-porn, and then a melodrama, and then torture-something again until the end which is so... incongruous and out-of-the-blue that I didn't know if I should have laughed or taken it seriously.