Imagine if you will that your early '90s nerd/nerdette/nerdite self's video game fan-fiction game to life and you'd probably get something like Exploding Rabbit's platformer game Super Mario Bros. Crossover 3.0. Now in its third major release, the game allows you to play as everyone from better-than-Boba-Fett bounty huntress Samus Aran to Mega Man 10's Bass, all with their iconic abilities intact, tearing up the classic Super Mario Bros. levels you know and love. Dismissing this as just a simple knock-off is doing it a disservice, and this latest update cements its position as one of the crown jewels in the fan creation crown. 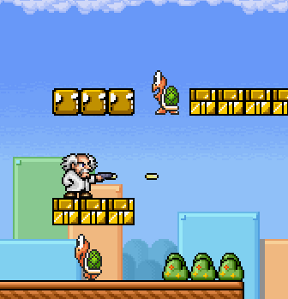 Though essentially the same game as the original, this release brings with it a whole host of changes and tweaks, some minor and others not. You can, for instance, play easy and hard versions of all levels, and an entirely new set of stages from Super Mario Bros. Special has been added, bringing the level count to a Kaiju-sized 192. Add in more skins, new enemies and power-ups, and a ton of improvements and you have a fan-made game that basically redefines "labour of love". The sheer amount of work that has gone into making this what it is, is more than a little impressive. Some characters still feel like they play smoother than others, making them more novelty than fun unless you enjoy the added challenge. But with the staggering amount of characters you can play as with the inclusion of skins and enough levels to keep you going for a long time, Super Mario Bros. Crossover 3.0 is a huge achievement that deserves recognition for that at the very least. Even if it did make me realise how much of my brain is devoted to remembering every single bar of music from Final Fantasy: Mystic Quest. (Is this why I can never remember anyone's name until I hear it several times? It explains so much.)

Thanks to Repairmanman for sending this one in!

Is it my computer or do the controls seem kind of sluggish?

Melewen, I believe it depends on what character you're playing. Some of them play smoother than others, as I mentioned, because the games they come from originally weren't platformers in the way that Mario is.

How do you save you game?

I can't even get this thing to load. It'll freeze on the loading screen at at random point (I've seen it happen from 17% to 98%), and then go to black. I'm wondering if there is a secondary ad embedded in the game that is failing to load.

Update: It appears Exploding Rabbit's website is blocked at my work (who knows why), so it would appear that the JiG version is trying to reference the site, leading to the crash. Oh well, I'll have to try it at home.

When I try to start a new game, it tells me that the version of the game JIG has hosted is an older version. The dialog is easily bypassed, but it's probably there for a reason. Perhaps an update is in order?

I'm only a few levels in, but link is definitely OP. The boomerang not only temporarly paralyzes the monsters, but serves as a wall for the monsters behind it. You combine that with the shooting sword power up (sorry for my lack of Zelda terminology) and it's not even fair.

Perhaps it gets more difficult later on. Fun concept, though.

I found the best cheat in the game.
what sucs is im nt goig to tell you wht it is.
aybe f you look arefully yu will fin it somwhere