Piotr Iwanicki, Jakub Ziembinski, Lukasz Spierewka, Marek Baczynski, Konrad Kacperczyk, Dawid Adamkiewicz, vxd555 and more are behind the surreal first-person shooter game that is Super Hot, where time only moves when you do. ... well, okay, it still moves when you don't, just very, very slowly. With limited ammunition and the odds stacked against you, each level represents a puzzle more than a John Woo action sequence where you're tasked with taking out all the enemies around you without getting killed yourself... easier said than done since a single shot is all it takes, and yes, the movement of your bullets (and those of your foes) is also affected by your unique time-bending status, so you'll need to plan trajectories and learn how to herd your enemies around. Use the mouse to aim and shoot, and [WASD] to move around. 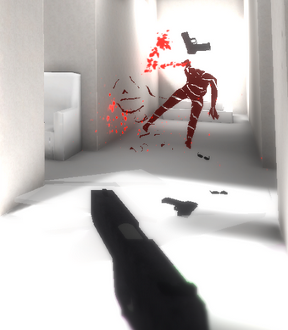 It's a great idea, and Super Hot's formidable team of talents has executed it with an incredible amount of style. Originally created for the 7 Day First Person Shooter challenge, it's since been tweaked and polished, though some things are still a little awkward. The lack of an onscreen ammo counter, for instance, as well as a somewhat unclear "hit box" resulting from your lack of visible torso that makes dodging incoming fire more guesswork than it should be. There's also no level select, so you have to finish the entire game in one sitting, though there's only a handful of stages anyway. Just remember that if your gun does run out of ammo, it's possible to disarm an enemy if you get close enough and take their weapon for yourself, or snatch up a fallen one.

But Super Hot is still not just gorgeous to behold, with its stylized design and stark colours, but brilliantly satisfying to pull off. Watching bullets streak towards you in slow-mo while you ponder how to dodge them before stepping aside to watch a red trail speeding straight for the enemy who was standing behind you feels more challenging and involving than brainless firing. Pity, then, it's such a very short game, and with the ending as baffling as it is, one can only hope the developers get the chance to develop it into a full game and storyline... though I'd honestly just take a whole mess of random levels, because the clever gameplay and concept shines in a way that begs more of it. Super Hot is proof shooters can be far more than mindless, and far swankier than you'd ever expect too.

This game is super fun!

Really cool game! Strange idea, but it got pulled off in a really cool fashion! The fact that you don't know how much ammo is left in your gun got annoying, but it was definitely worth it! I could do with more levels, definitely!

I didn't really understand the ending though. Did we go the Bioshock "You were being controlled by a different person this whole time" route? I'm glad the character actually died at the end though (I think), as that keeps it from having a sort of "cop out" feel that most games that attempt to take the control away from the player have

I think that this game is

Be warned that this is a pretty large game and takes a while to load even on a faster connection.

In case anyone wants more of this, the devs are trying to get a full version of Super Hot on Steam, with apparently about as much playtime as Portal 1. And an arena mode! There is no reason to not look forward to that.

loved it, going to vote for it on Greenlight right away :)

I really liked how the instructions are given, with the flash noises and all; really helps in setting the mood.

well will you look at that: SUPER HOT got greenlit in only five days.

really, go play it if you haven't already :)

It's a unique game. I just finished it, and now I feel like everything is in slow motion and time is in my control. I don't know how to describe this feeling. Never felt this way before.