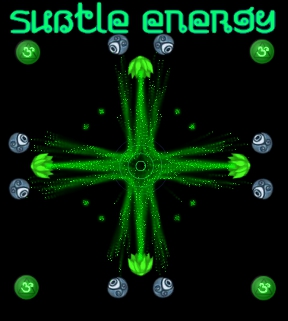 I keep hearing how gaming is supposed to be a relaxing hobby, how booting up your XBox, Nintendo, or Fairchild Channel F is supposed to be a great way to unwind after a stressful day. But considering how many games demand keen senses, hair-trigger reflexes, and general poise under fire, I just don't buy it. A truly relaxing game should lull me into a peaceful state, not put me on edge. However, we occasionally come across a game that manages to be as soothing as we often hear gaming is supposed to be. Subtle Energy, a new-agey, color based puzzle game reminiscent of Auditorium, is one such title.

The goal of this new-agey puzzler is to direct the streams of colored particles, which project from colored lotus flowers, to correspondingly colored chakras, represented here by colored symbols. Drag eyeballs and other tools onto the screen in order to do this. Eyeballs redirect particle streams toward the direction or directions they face, and they can also blend streams into new colors (remember: red + green = yellow, red + blue = magenta, green + blue = cyan, and red + blue + green = white). Streams will also change color when they bounce off of colored walls. Once you have everything set up the way you like, press the Play button in the upper right corner to see if it works. Direct enough properly colored particles to all the chakras without overloading them, and you can continue to the next level.

Subtle Energy succeeds in being a pretty relaxing puzzler. The soundtrack is inoffensive aural Xanax, and it is always soothing to watch colored pixel streams flow about the screen. The puzzles themselves are few, and while most are not too difficult, you will likely find that some make you stop and think. One could object that the difficulty curve is not so much a curve as an uneven graph of spikes and valleys, but one could also argue that the variety of pace keeps the game interesting. All in all, Subtle Energy is not meant to be a vexing puzzler, but a pleasant way to occupy a break in your day, and shows that games can be stress-free after all.

It's one of those games that can keep you occupied for hours...loved the level design, lots of challenging stuff along the way.
PS- Pretty colors :)

I love it! i relax when i play this game!

Nice game, thanks for sharing and adding another stress relieving game to my list. Solitaire,
Crosswords and a couple of other puzzle games works best for me.

Im at 18 and its soooo hard