GlobeX is back. Their army of clones is ready to deploy and bring the world under their control. Almost every member of the Strike Force Heroes has succumbed to the GlobeX reprogramming. All but one. But as long as one remains, there is hope. Your mission must rebuild your team, rescue your teammates, and stop GlobeX once and for all. SF- Hero! A real ambiguous-nationality hero! Strike Force Heroes 3 by Sky9Games is a bit of a departure for the Strike Force Heroes series in many ways, but the basic fun of its run-and-gun arena-shooter action at the core remains the same. As in previous installments, your soldier moves, jumps and crouches with the [WASD] or [arrow] keys, and aims and shoots with the mouse. Switch between your weapons with [Q], and charge various "streak" bonuses by killing multiple enemies in a row without dying, activating it with [E]. 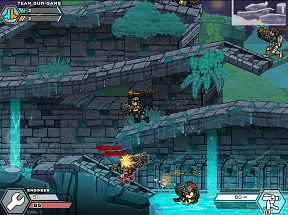 Each level in campaign mode has various win conditions, be it a certain number of individual or team kills, capturing the enemies flag, or working as a team to face off against a single boss. Unlike in previous installments of the Strike Force Heroes, there is a much greater emphasis on modifying random pre-made heroes with unlocked perks and weapons, rather than pure character building, and that doesn't even begin to mention the hero and environment status effects. There's still probably as much customization available to make your character just as you like 'em: it just all needs to be unlocked, either by earning money in fights, gaining experience, or winning it in the slot machine... Though, of course, even getting that store and slot machine unlocked takes winning a couple of fights to begin with. Therein lies the rub of Strike Force Heroes 3: there's a ton of Christmas presents under the tree waiting to be unwrapped, but the packages have a lot of tape and those crazy little CD stickers on them. And the presents aren't particularly well-balanced either, their menus aren't completely user-friendly, and anyone with a slightly old computer is likely going to be hit with a good dose of lag. Okay, the metaphor is breaking down. Point is, Strike Force Heroes 3 is a great amount of fun because shooting things is a great of amount fun. However, when you start in on it, it's hard not to look and be wistful at the fully open Strike Force Heroes 2 sitting right beside it; it's the veritable new Street Fighter III trying to measure up to the refined Super Street Fighter II Turbo just across the arcade. But if Strike Force Heroes 3 offers fun that needs to be earned, be assured that it is there waiting for you to find it: just like you can always be assured of a never-ending stream of clone soldiers just eager to be blasted.

3,365 Views
6 Comments
chrpa— Jayisgames needs your help to continue providing quality content. Click for details After a tiring long day - it's not fun to raise five kids - Mother Mouse finally put her offsprings to bed and left the room for...  ...