Less actual game and more interactive art meets social experiment, Evil-Dog and SickDeathFiend's StoryShift (requires free account registry) bills itself as "community driven story-telling". It's filled with different stories and comics of all genres written by different writers, and the catch? You decide what comes next. Each story is ongoing, and provides several options as to how certain events could unfold, allowing readers with free accounts to vote on the next direction they think the story should take. Though the majority rules, the more you vote, the more influence you gain, making your votes more influential than others. Once a voting period ends, the author will update the story according to the decision the readers chose, and the process continues until the tale is told. You can choose to subscribe to specific stories so you get notified when they update, or even contact the developers if you're interested in taking part as a creator yourself! 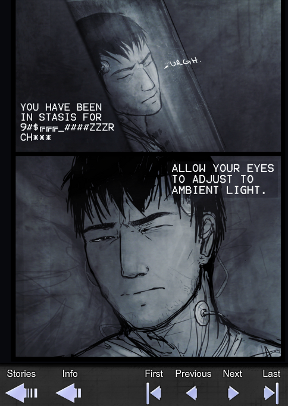 It's a strange concept, and time will tell how well it works out, with perhaps the biggest pill to swallow being the concept of "voting influence" rather than allowing the numbers to speak for themselves. The fact that the options are restricted to those created by the authors themselves means that the chance for fly-by-the-seat-of-your-pants mayhem as far as plot goes is relatively low, and it would be nice (though hard to implement) to see some sort of ability for readers to write and vote on their own ideas to really cement the community-driven atmosphere the thing is going for. Yes, then you'd have to deal with me demanding Lwaxana Troi replace every main character, or authors rioting because everyone is voting for their super serious noir mystery to suddenly take place in Equestria, but hey. You take the good, you take the bad, you take them both, and then you have... a lot of crazy fun.

At the moment, StoryShift is rife with possibility, and offers a lot of different genres to try out. There's everything from classic fantasy adventure to creepy sci-fi horror, and so far the level of quality is set exceptionally high. Unfortunately, there's no content rating yet for individual stories, so if profanity and violence bother you, you'll have to tread carefully. The ability to leave comments on stories would also be a nice touch. If you like serialized stories, however, StoryShift is a great idea that has the potential to grow into something even bigger and better the more people get involved. The interface is clean and easy to use, the content is diverse and polished, and as long as things are updated, StoryShift could provide you a lot of entertainment for a long, long time.

My favourite thing in this is Kansas, by MK Douma. My least favourite thing about it is I HAVE TO WAIT TO READ THE REST OF IT. This is why I read all my comics when they're released as collections!

The community-driven story concept has been done before. Most notably, the MSPaintAdventures forum has been doing this for years. I'm certainly all for other developers working on the concept though. There were a lot of pitfalls with the MSPA community getting too large and the forums not being specifically designed for story-telling.

I was aware of MSPA, which is why I didn't say this was the first of its kind. :) I thought the way this was handled and implemented was drastically different enough to stand on its own.

>Implying that a super serious noir mystery can't be set in Equestria.
That said, this seems very intriguing.

I am actually not implying that at all. ;) I said you'd get people demanding it instead of the story the author intended.

I feel that this game should be avaliable on E-readers with e-ink display. The small screen of your device makes it difficult to read and it gets uncomfortable.
I hoped for interactive stories framework, instead of normal ones.
Many E-readers have basic functionality web browser. It should be presented that way.