Things are getting steamy in Dreamgate Company's rip-roaring defense game Steampunk Tower, where you're tasked with building a towering mechanical monstrosity and stocking it with all manner of lethal weapons to take out the invading forces before they can destroy it. Click on the arrow to build a weapon if you've got the cash, then drag it to one of the platforms on either side of the tower on each level. They'll attack automatically whenever something gets in range, but keep an eye on the yellow bar when you mouse over them... that's its ammo, and when it gets low, you need to drag it back down into the tower to reload. As they splatter enemies, their blue experience bar will fill, and when it does, you can drag it back down into the tower again to pay to level it up. And when your tower's core glows red, look out, because you can activate it to burn things up Eye-of-Sauron-Style with a deadly focused electric blast! As you might expect, each level gets more difficult, introducing more and more enemy types, so you'll really want to not only figure out what weapons work best in any situation, but also earn all three stars on each level to spend on upgrades. If you're feeling plucky enough, you can even replay levels you've already beaten in challenge mode to earn yet more stars! 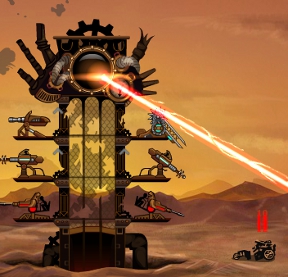 Steampunk Tower is one of those games that can easily be pointed to time and again as an example of how to do defense games right. It balances just a handful of different weapon types with useful upgrades and strategic enemy variation to keep you on your toes, and the pace will soon have you frantically flinging towers left and right to adjust your tactics. It doesn't hurt that it both looks and sounds great too, with a high level of professional polish. Repetitive? Maybe a little, though most defense fans will lament the lack of a button to speed up the gameplay. In the end, however, Steampunk Tower isn't just a beautiful defense game... it's a beautiful game period, with the sort of effortless addictiveness and simple yet engaging gameplay that is so dangerous to your productivity. Monocle and tophat not included.

Thanks to RacerX for sending this one in!

This game is pretty neat, but I'm not fond of the fixed upgrade mechanic it uses. If I have trouble with a higher stage, I prefer being able to grind a lower stage for points/gold/etc. to upgrade enough to surpass the higher stage.

Tenzhi, I would normally agree with you, but I found that this was compensated by there being no cost/penalty to resetting your upgrades and trying a different configuration. That, combined with sort of "grinding" by going back and completing some of the challenges, allowed enough flexibility IMO.

I find it extremely annoying that guns will allow weaker enemies to sit there and destroy the tower while they focus on big enemies. Adding an option to choose what type of enemy for each individual gun to attack (e.g. closest, strongest, weakest, most/least health) would fix that.

I'd also like to see a wave progress bar.

After 10+ tries I have found that challenge 4 is not impossible, but very hard. Clean one side at the time and switch side when the enemies are getting close to the tower on the other side. This way you will kill larger groups of enemies which is more effective.

how to get past 4? Tesla is your friend.

I couldn't fail to recognise "It's a Long Way to Tipperary" but I wonder whether anyone can identify the other clips?

Challenge 4 is a non-starter for me because I simply can't hit all of those soldiers.

Challenge 9 is a bit easier but there are just too many planes for me to catch them all.

Challenge 12 I did get near the end but I couldn't work out how to deal with the four walkers at the end and also the grand tank halfway though. (There doesn't seem to be enough steam for both, even on max upgrades).

Scratch that, I just finished challenge 13.

This one basically needs to you be quick to swap the two cannons over all the time.

Swap the cannons before starting the first wave, and keep swapping them so that the lightning shoots the soldiers and the saws shoots the tanks.

When the first walker appears, let the saw hit it twice, then switch to lightning to take out the soldiers.

When the second group of soldiers passes the walker, move the lightning away and back, this causes it to retarget on the soldiers before hopefully finishing off the walker.

After your saws has destroyed the grand tank, use the lightning to take out the parachutists on both sides. Then leave the lightning on the left and the saws on the right and use the steam strike to help destroy the walkers.

neil.rashbrook, I figured out what one of the other songs was: "Don't Bite The Hand That's Feeding You" sang by Walter van Brunt.

Any thoughts on strategy?
eg What advantage does a machine gun tower have over an electric tower? They both seem to be designed for large masses of weak units...

4,549 Views
1 Comment
chrpa— Jayisgames needs your help to continue providing quality content. Click for details After investigator Roberts and his companion Atzalar together with professor Fargleton successfully got rid of an ancient fearsome demon, Farold Roberts with Atzalar go to the abandoned factory...  ...