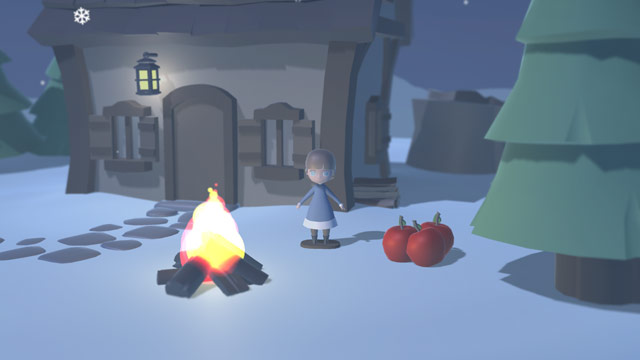 This is the story of a young girl named Tabitha. Now before you groan in your chair thinking it's going to be some cliché little thing, let me get to the point and inform you that it also involves a mysterious cottage, a terrifying witch, and most notably, a potty-mouthed badger named Colin! In this slightly more adult version of a fairy tale, Tabitha is placed into a snowglobe (a "thing which all witches totally have) in a burst of magic that "no amount of artistry effects could hope to capture in seventy-two hours." There is a nice warm cottage, but as Tabitha's luck would have it, the door is locked firmly shut. Can you find a way in to continue the story?

Snowed In is beautifully voice acted production, and the audio adds significantly to the quality. The only improvement I could think of would be to tack on subtitles, but for a game made in 72 hours - about which the authors inject their own sense of humor - it's a solid production that'll give you a few laughs. To play, use the arrow keys to tilt the snow globe and cause Tabitha, along with other objects inside it, to slide around, and press space bar to shake the snow globe, potentially prying objects loose. So will you give Snowed in a try before the last of the April snow melts away? I wouldn't wait too long if I were you - enchanted snow globe or not, I don't quite trust it!