You think you know Candyland? Think again. Travel to a sugar-spun, crunchtastic candy kingdom in Skights, Joilly's all-naturally-flavored free, browser-based episodic visual novel about magic powers, mysterious cutlery, and even a little bit of amore. Long ago, in the kingdom of Sugaria, the three lands of Chocolate, Vanilla, and Strawberry were peacefully ruled by the Cherry family... until the Cherry Princess managed to tick off a trio of fairies and get herself cursed. Whoops. A thousand years have passed since then, and the Cherry family has faded into myth. One day, however, a trio of girls, one from each land, find themselves blessed with tiny, magical utensils that grant them mystical abilities... and a sweet wardrobe upgrade. Join ordinary gardener Vanilla Vanessa, highborn noble girl Chocolate Cassandra, and forest-dwelling rogue Strawberry Sam as they embark on adventure and seek their destiny. Currently, this visual novel series consists of four chapters, with one introductory chapter introducing the girls, and three following chapters that are each from a different girl's point of view. But an assortment of branching paths means that Skights still has plenty of tale to tell already. 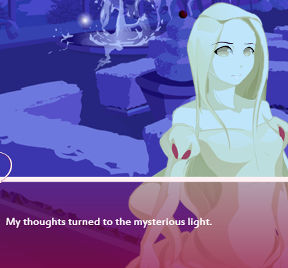 Skights spins a tale of a sweet, charming world that's hard not to like. The beautiful backgrounds and charming character portraits set a lovely scene, and the worldbuilding done in the story helps really establish the sweets-based fantasy kingdom the game takes place in. The three lead characters, Nessie, Cassie, and Sam, are all distinctly characterized, and each one lends their own personality and point of view to the story they're taking place in. None of them feels like simply a player stand-in. Skights also handles the topic of player choice well: Although the episodes don't always contain many choice points, each one has a fairly dramatic effect on the scenes that play out after. Certain characters will treat the protagonists in an entirely different fashion based on your choices, and the game has several paths, making you feel as if your decisions really impact the story. Unfortunately, some of the paths do lead to "Game Overs," and it's not always clear which paths will lead to your untimely demise, which can be quite frustrating if they happen midway through a chapter. The game has no mid-chapter save points, meaning you'll have to redo the entire chapter if you suddenly die. And disappointingly, the prose itself is somewhat lacking. There are a number of typos, and the dialogue is occasionally stilted. Some of the routes contain small plot holes or inadequately-explained plot devices. The overall story and characters are good, but the writing feels as if it could have used a good editor before being published to the Internet. The forthcoming installments means the series still has some time to really work on its polish, though. For now, Skights offers a beefy free visual novel experience with characters and plot that make you eager to learn more.

This is a very creative story with beautiful graphics, but it is sadly tarnished by a failure to proofread the text. There are some misspelled words and quite a few serious grammatical flaws which suggest that the author is not a native speaker of English. I suggest the author should get some assistance with a skilled copy-editor and correct the errors.

This is cute! I really like the art and general concept, though I agree that it would probably be a good idea for the author to get a copy-editor. Also, it would have been nice to know that the romance content was only going to be girl/boy?

Hi there! I've been working to ensure that our tag (https://jayisgames.com/tag/lgbtq) for lgbtq content is on all games that apply. The best I can advise is to check the tags below a game's title to see if this tag is present, and assume a lack of it means that a game does not include the option for lgbtq romance. I encourage you to ask if you're ever unsure. :)

Dora does a great job of tagging when games do a good job of being LGBT-inclusive, but since LGBT content is not yet the default, it's assumed that if a game doesn't have that tag, it doesn't have the content you might be looking for. Which makes sense, since otherwise most games (even romance VNs) would have to get the "no LGBT content" tag. A shame that we live in that kind of world, but since we do, that seems like the most pragmatic tagging method.

That said, I'm super disappointed that when I finished part 3b, I did not see anything telling me where to go next. Directions for which part to play next should be more obvious in placement