Royal Envoy: Campaign for the Crown

A long time ago, in a kingdom far, far away, lived a rather hapless population, governed by a king who was pretty snooty but ran a rather tight ship. Then one day things began to fall apart and it was all blamed on the king. Now a mysterious stranger has come to town and challenged the king's right to rule. Can the royal envoy fix things before the general election? Yes rejoice time management fans, because a certain snooty king and an incompetently run kingdom are back for a third time to test our puzzle solving reflexes. Playrix Entertainment is back with Royal Envoy: Campaign for the Crown and the action is faster, more frantic, and much more puzzle driven than ever before! 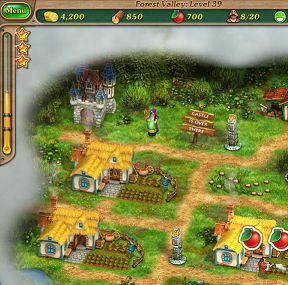 If you've played any of the first two Royal Envoy games the basic gameplay should be pretty familiar: Each level has a set of goals which can be accomplished by constructing housing or buildings to meet the needs of the local residents. Solving a level is a matter of marshaling certain resources such as labor, gold, lumber, and food and applying them to create housing, buildings, or other specialized structures needed by the residents. Everything can be accomplished either by a click of a mouse to set tasks or just a sweep of the cursor to pick up food, gold, or lumber that has been produced.

Each area of the kingdom has its own particular climate and challenges, whether it is snow, desert, or swamp. There are a small variety of houses to produce rent, buildings to produce goods, and decorations to produce happiness with which to work as you attempt to repair the kingdom and kick out Swindler before he completely ruins everything. Along the way you are helped or hindered by a wide variety of characters including blackmailing pirates, mad hatters, greedy gluttons, helpful elephants, bored druids, and many more. Can you win the election for the king? 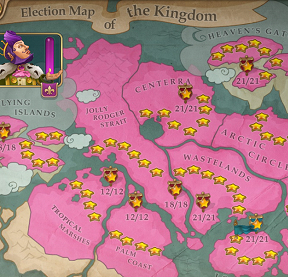 Analysis: Royal Envoy: Campaign for the Crown does something highly unusual in a time management game of the Build-a-Lot type that it started out as. Rather than pile on a ton of new stuff, the game first strips back a lot of the basic gameplay. There are now only three types of housing available, and the buildings such as the sawmills and markets never get any bigger than the beginner's level which offers 50, 100, and 250 of each resource. By stripping the core gameplay back in this way Playrix can add on the new stuff that is unique to each region of the kingdom without overwhelming with useless details, making the gameplay even more thoughtful and puzzle-centric. 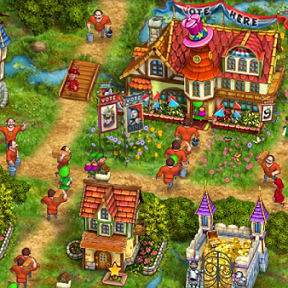 Getting used to the more basic gameplay allows you, the player, to enjoy the new stuff even more. The mad hatters and their amazing magical tunnels, the bribable (and helpful) elephants, and all of the other new characters and challenges. Especially fun in the dark and the fog levels are the drunken pirates and the druids, who will light up bonfires to illuminate an area, but only for money and only for a limited time. If you want the light to continue, the gold must continue to flow. It's a very old lesson but a good one: Once you pay the danegeld, baby, you never get rid of the Dane!

Royal Envoy: Campaign for the Crown is packed with a ton of gameplay. With 63 regular adventure levels, and another 63 expert adventure levels (reachable if you can three-star all of the regular adventure levels), you are looking at hours and hours of fun, frantic time management gameplay. Playrix proves that less is more with this third entry into the Royal Envoy series. For fans of the genre, this is unique and challenging entertainment and the answer to the eternal question: what do you do with a drunken sailor? In this game, you pay him. Lots.

Note: Royal Envoy 3 is currently only available in a Collector's Edition, which includes bonus gameplay (30 challenge levels), wallpapers, a screensaver, the soundtrack, and a built-in strategy guilde. Remember that Big Fish Game Club Members pay only $13.99 for Collector's Editions, and collector's editions count 3 card punches of 6 total needed for a free game.

Let us know if you need any other tips for Royal Envoy: Campaign for the Crown!

Should this have a browser tab? I've wandered around BigFish and I haven't seen preview levels on the online side.

This is the latest one in the series and it's a download game.

Get it together y'see!

Agh I just lost a whole evening to this game why do I have to find this series so addicting.

I enjoyed RE2, and I'm enjoying this third incarnation too, but I the original really had something about it that I think Playrix missed in both of these sequels. I enjoyed the slightly more complicated gameplay mechanics of the original, and most importantly that Playrix did an exquisite job of carefully designed each level so they were a puzzle of resource management and strategy.

I feel as they've simplified the elements of the game they've taken away a layer of the puzzle that made the original great and the replacement doesn't offer the same depth.

For example, I could do without the secret cache of resources that I only find by destroying a building (without which it's impossible to beat the level). The fact that the level designers resorted to that indicates that the underlying mechanic are not interesting enough to design fun and challenging puzzles without a trick or gimmick.

(I have nothing against a linchpin to a puzzle solution, in fact they are often some of the best puzzles, but the linchpin should be a fun discovery moment, not a cheap trick).

All that said, this is a good game, but the original was a great game.

I disagree, I think the second game was the high point of the series. The first game is extremely tedious to the point where I almost quit playing it without beating it. Having to watch workers and tax collectors take their meandering routes was excruciating and removed a lot of the fun for me. (Full disclosure: I did play it after the second one.) On the other hand this game I think stripped things down a bit too much, with many levels resorting to the same solution of "do the math of exactly how much of a resource you need, then demolish the building".

Let us know if you need any other tips for Royal Envoy: Campaign for the Crown!

@Regy Fair enough. Despite my poo-poo remarks I really enjoyed all versions, I just thought the first was better. They are just different games, I suppose.

@Jazz You do know about the complete walkthrough that exists in the game itself, right? (main menu -> extras).

Of course we do...that's why games are called Collector's Edition. But, in this case, you have to actually leave gameplay, go to the main menu, make two other selections to view it, and then retrace your steps to continue the game. JIG just felt it was better for you to have one you could view at the same time as you play the game. :)

Also, we anticipate that a Standard Edition will be released in the near future, so this ensures folks who don't purchase the CE will also have a walkthrough to consult.

There is no need to return to the main menu in order to access in the in-game walkthrough. Each Adventure level has a green "?" button in the upper right corner. Click that to pause the current level timer and jump directly to the walkthrough for that level (which is written to solve the level using Expert Mode timings).

I was one of the people who WROTE the in-game walkthrough (can't advertise our site here) so I'm pretty clear about how the game works.

5,890 Views
5 Comments
chrpa— Jayisgames needs your help to continue providing quality content. Click for details You find yourself on a deserted island, you still have your small boat but the oar is lost somewhere - what now? Sounds familiar? Yes it's not the...  ...