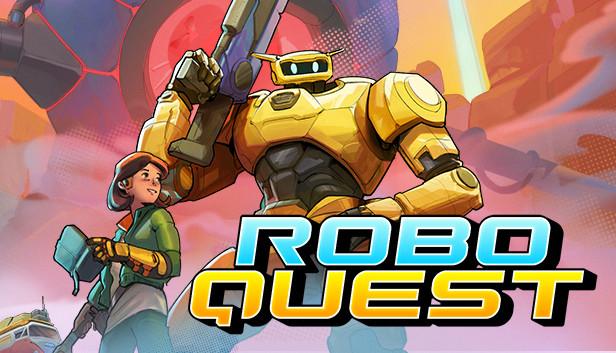 Roboquest is a roguelite looter shooter with strong Borderlands vibes developed by RyseUp Studios. You play as a lovable yet deadly robot as you help your human companion solve the mystery behind a robot uprising.

The playful and stylistic visuals of Roboquest have clear inspirations from the Borderlands franchise. The semi-muted tones and cheery aesthetic, however, help Roboquest forge its own distinct look.

Levels often have a minimalist and drab color palette, focusing on just a handful of colors, but to great effect. From the arid earth tones of a desert canyon to the soft blues of a snow-covered city, each new area looked unique and exciting. 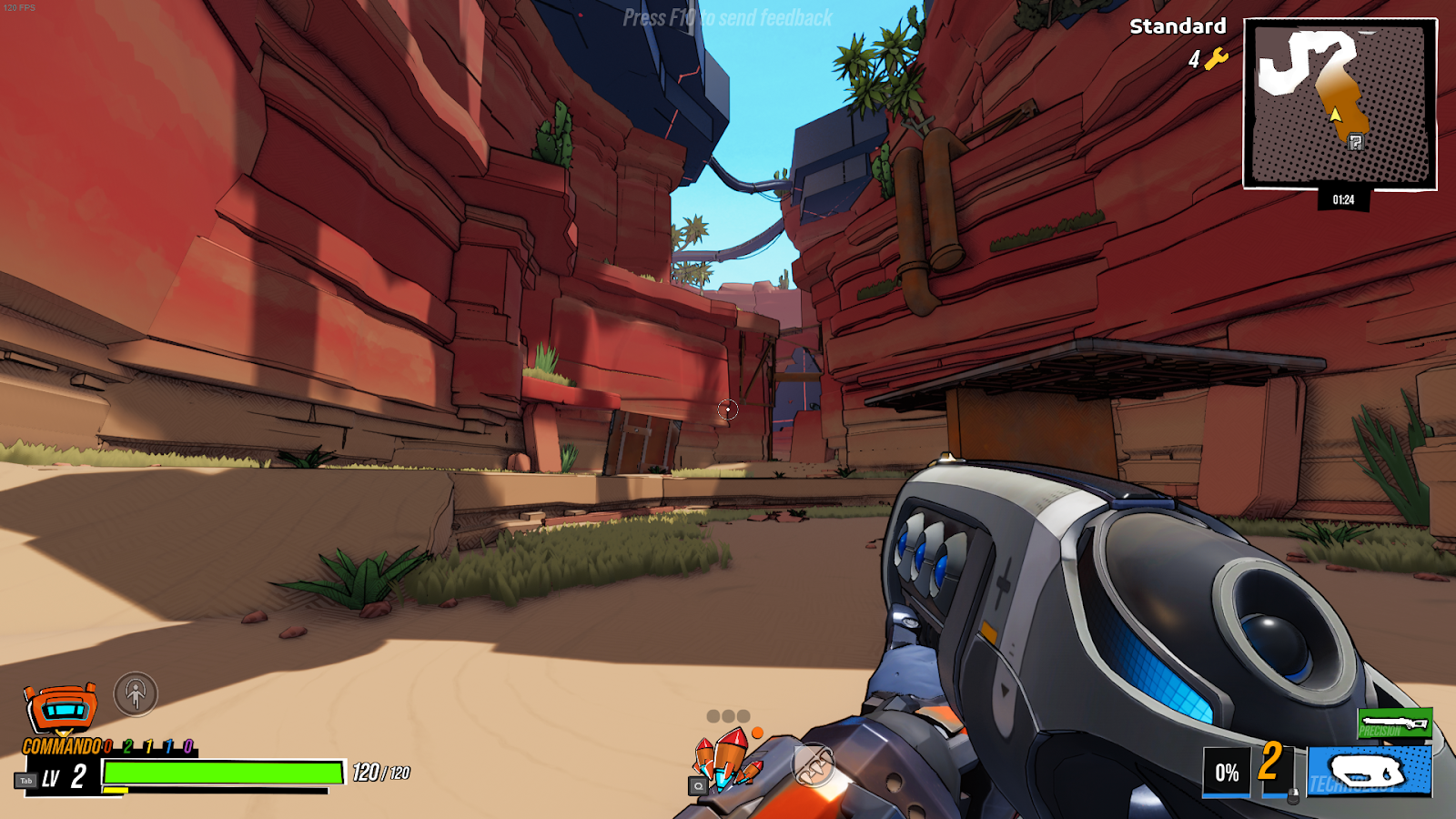 Although I would have liked to see more enemy variety, the character, and basic enemy models were competent. On the other hand, the guns were the stars of all the games' models. Many had a great cobbled-together feel, reflecting the post-apocalyptic setting.

This game does a great job of using audio cues to inform the player. For example, special loot-filled enemies chirp with a noticeable robotic sound as if to say, "notice me before it's too late!" and abilities hit you with a sharp "zing" when they come off cooldown. (Even games like Overwatch struggle with this sometimes, when ability cues are way too quiet.)

The soundtrack does an excellent job of capturing the feel of robotic combat. Dodging enemy bullets to the hurrying sounds of electronica music put me in a flow very easily. There's something immensely satisfying about timing a killing blow to a deep bass drop or a sharp crescendo. I even enjoyed the loading screen soundtrack, which was mild in comparison but still very catchy.

The story in Roboquest provides a nice context to the action. As the name of the game suggests, you are a robot on a quest. You are reawakened by a bubbly scavenger girl many years in the future. Together you embark on a journey to uncover the mysteries of the robot apocalypse.

While story elements are pretty light in Roboquest, the bits we do get felt intriguing. Often told in a stylistic storyboard format, the game does just enough to keep me invested in the characters.

After a short tutorial mission, the player is dropped into the main hub. Here one can purchase upgrades to help on future runs, equip relics, or even change classes. Of course, as any fan of the genre knows, this is pretty standard in a rogue-like game. But I think Roboquest does a decent job in this regard. Currently, Roboquest offers four playable classes, each with its own unique abilities and distinct play styles. So whether you like close-ranged "in your face" action or prefer a more stealthy approach, Roboquest has you covered.

Each time you level up, you get to choose between a few perks. Some of these bonuses can have a significant impact on gameplay. I sometimes found myself rethinking my entire strategy after obtaining certain perks. The Recon's melee attack, for example, can be upgraded into a mid-range beam slash, making a closer ranged build less risky.

I really enjoyed this perk system but felt as if it needed way more options. While the available ones are well implemented; There wasn't enough to scratch my theory crafting itch. That being said, Roboquest is still in early access, so the number of perks will likely see an upgrade. 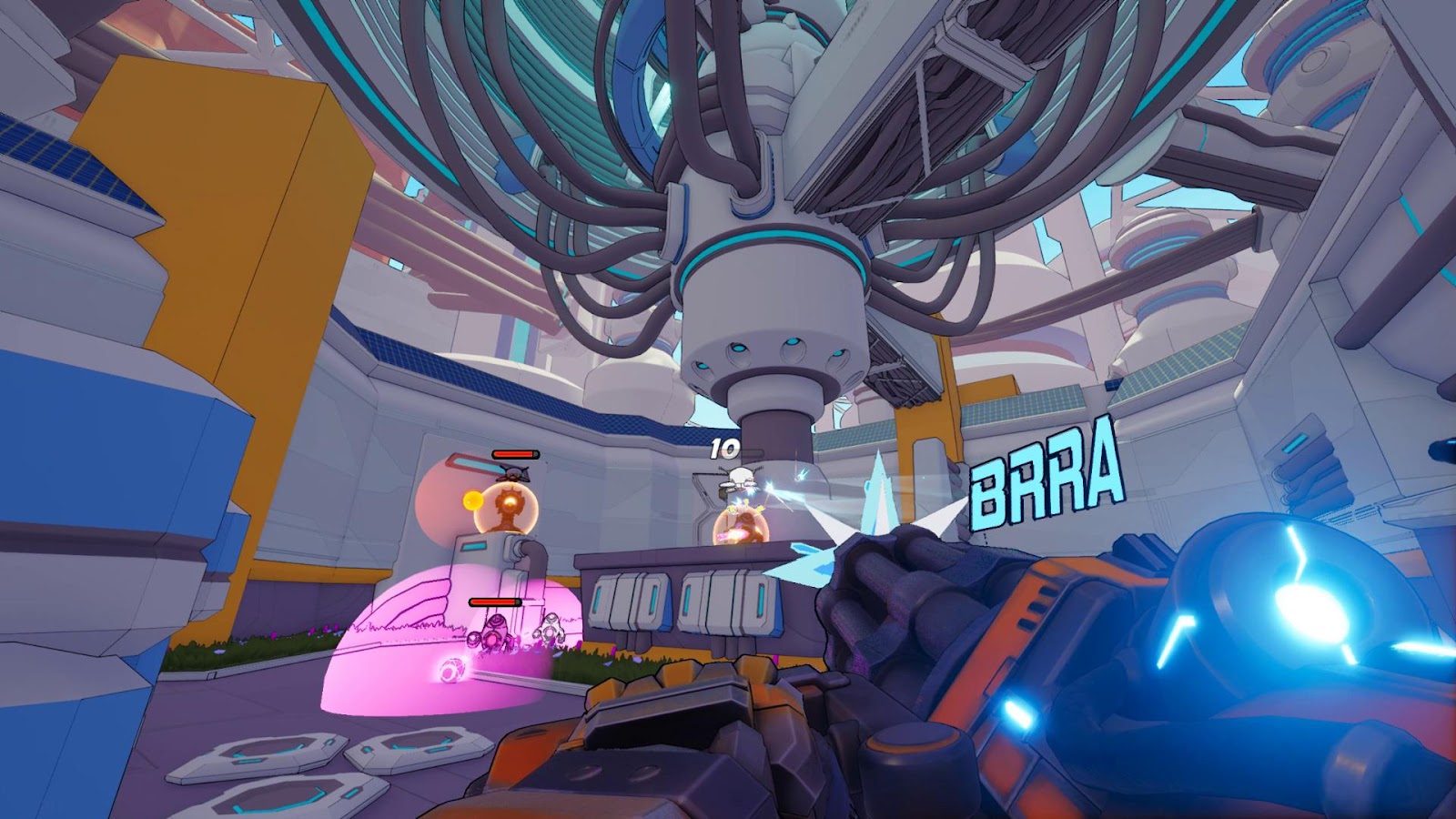 On to the best part, the action! The quick and snappy gunplay and smooth movement mechanics made for an enjoyable experience. Double jumping out of danger while returning gunfire made me feel like I was in the Matrix. It's pretty fast-paced, though not as fast as an older-style arena shooter.

The level design embraces this dynamic movement system, offering a parkour-like feel. Between jump pads and rail slides, there really is a sense of verticality to this game. You can even stun enemies by jumping onto their heads!

Roboquest delivers an excellent rogue-lite adventure. The slick combat, superb sound design, and offbeat visuals make this game a "must play" for fans of the genre. With the game still in early access, we are excited to see Roboquest grow into something exceptional.

1,837 Views
2 Comments
chrpa— Jayisgames needs your help to continue providing quality content. Click for details We've got a new game from Rinnogogo's magical world and this time it really is magical.. Not only do you get to meet cute animals that express themselves...  ...

Room 34: Room with Lily of the Valley

2,192 Views
1 Comment
chrpa— Jayisgames needs your help to continue providing quality content. Click for details After a few weeks of patient waiting, we have been rewarded - the new game from Ichima Coffeedo is here. We got a wonderful new game - it's...  ...