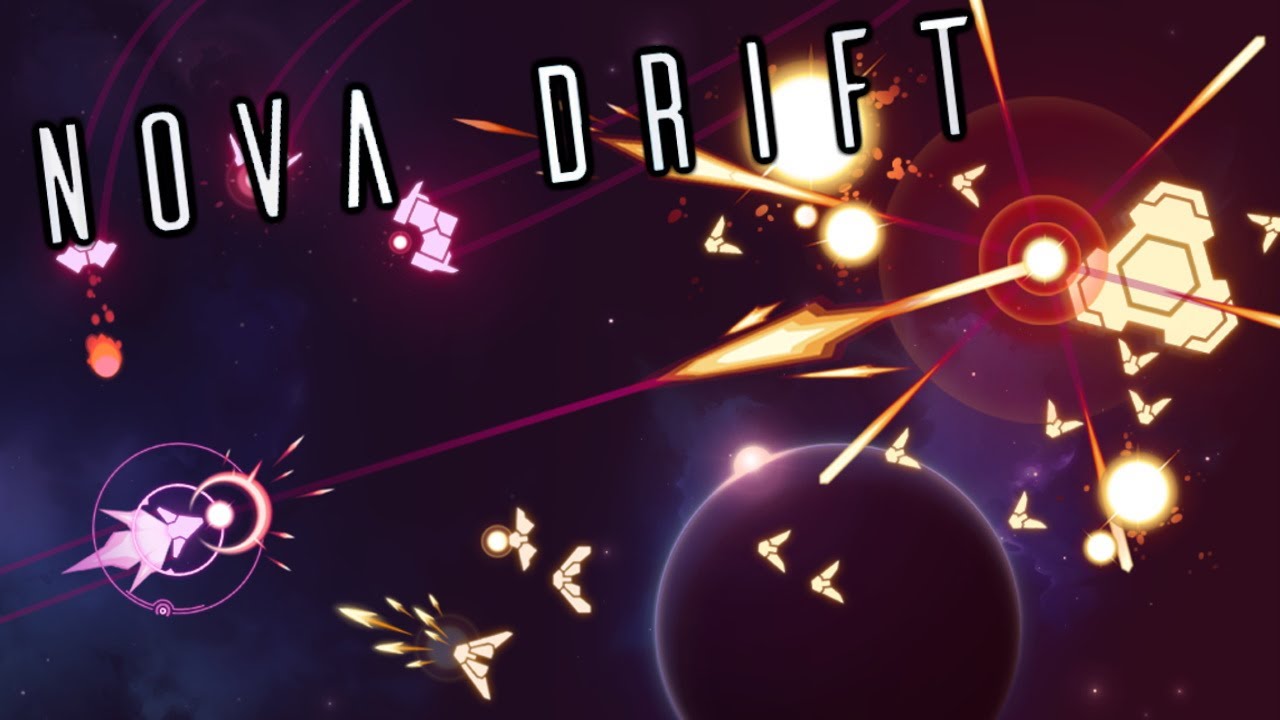 In a genre quickly becoming oversaturated, Nova Drift rises above the rest. A roguelike top down shooter boasting a sharp visual style and an emphasis on build variety. Nova Drift puts the player in an ever-evolving ship as they blast their way through wave after wave of neon alien troops, in a frantic dash towards high score glory.


It's like if the 1979 Atari classic Asteroids ate a billion kitchen sinks, turned into a black hole, and gained sentience. The build variety in this game is truly spectacular, allowing players the ability to customize their ships in a variety of creative ways (with a bit of luck...it is a roguelike, after all).

Do you want a glass cannon that carpet bombs the field with mines? No problem. Want those mines to release homing missiles on detonation? Sure. Not inflicting enough fire damage? Add it in! Nova Drift's systems are robust ones, to be sure. This game is a theorycrafter's dream, an achievement further underscored by the diminutive size of the development studio; it's a solo-dev, after all.

The developer, who goes by Chimeric, is consistently updating and patching the game. He also hosts a number of events from fan-art jams to speed run competitions. Chimeric has on a number of occasions credited games like Path of the Exile and Borderlands 2 as his inspirations for Nova Drift. With the massive amounts of customization within the game, it's easy to see why.

It's hard to find much to criticize about this highly polished gem. For complete transparency, it's one of my all-time favorites. Perhaps some would say that the learning curve is a bit steep. With so many mods and equipment to choose from, it can be a bit daunting. For some, that's part of the allure. I'm more than 150 hours in and I'm STILL finding novel mod interactions.

There's also not much story in Nova Drift. And by not much, I mean none at all. At times, I found myself wondering "who are these aliens" and "why are they so aggressive," but then I rolled a cool shield mod and I didn't really care anymore. Who needs a story when you have life leeching laser mines?

One of the things I love about this game is how fast paced it can be. I boot it up and in seconds, I'm building out my god-ship. A narrative structure might very well hamper that swift and addicting gameplay loop. I would however welcome a codex of sorts, with some enemy descriptions and background context. Something to read between runs while I rehydrate and think up new builds.

If you've read this far then it will be of no surprise that I highly recommend this game, especially to fans of the roguelike genre. If you like to experiment with different builds or are a high score junky like I am, then this game is for you. Without a doubt, Nova Drift is a shining example of a roguelike done right. A top-tier indie game and a top-tier developer.

Speaking of developers, I reached out to Chimeric and asked for a comment and he was gracious enough to give me a small interview about the game's development. The questions are below, in bold.

What are some pros and cons you face as a solo developer compared to a larger studio?
"I worked at several mid to large game companies before I started working full time on Nova Drift. The experience gained from working alongside people who have been through the crucible of game development is indispensable. There's an overwhelming amount to learn, and building a game with a very small team is already an insanely daunting task, even without learning to navigate everything involved with publishing, PR, marketing, management, and business along the way.

It's becoming well known that most indie games fail financially, but I feel this is mainly because developers usually go into it under-prepared. You need a lot of experience first. After all, you're not only building a game, you're running a business. The developers that people hear about, the ones who started out knowing nothing, are outliers in the extreme. So, that's the hard part: the knowledge base required for building a game (mostly) alone is vast. When combined with everything involved with getting the game into the wild and making sure people actually play it, it can be crushing, especially when you get snagged on a problem you can't quite solve.

So, you need to put in the time in an environment where failure won't ruin you, like a larger company or at least a small indie team. Even then, indie games have a really low rate of being profitable. As daunting as all of this is, if you can make it work, you have complete control over your creation. You make the game you want, the way you want it, and you don't have to worry about your labor of love being undermined by some corporate analyst!"

Did you expect Nova Drift to do as well as it did?
"I had no idea. I did get lucky that circumstances allowed me the time and support to make it possible, but I think there's also a lot to be said for making a game "for the right reasons". To say it simply, Nova Drift was something that I, as a player, wanted to exist but... didn't!

There's a lot of inherent power in that as you and your target audience are the same. If you know what you want your game to uniquely accomplish and how you want it to feel, other people will align with those ambitions."

After Nova Drift's full release, will you be starting another project?
"I'd love to make a sequel, and I know exactly how I'd want it to be different (and the same!), but that's scary to me. There are so many pitfalls with sequels, and burnout is a real threat. I've been thinking about Nova Drift in some form for almost 7 years now! I have a pretty big collection of games I'd love to make, but I feel huge pressure to choose the "right" one.

I think the determining factor will be how well Nova Drift does at full release, and how long it's supported afterward with updates or DLC. Honestly, after so many years of meticulously balancing mechanical interactions, my concept involving tranquility, cultivating a plant ecosystem on an alien planet is looking very appealing."

Can you please hide a picture of my cat in the game?
"Nova drift doesn't have any earth organisms in it! It doesn't even feature any truly organic creatures. Unless... by chance... your cat is a bio-mechanical luminescent cat-like example of convergent evolution..."