There's nothing wrong with being a square. Unless you turn everything else into squares, including the entire planet. Then you're one mean quadrilateral. Red Ball 4 Volume 3 is the final chapter of the epic Red Ball physics platforming games by Evgeniy Fedoseev, in which a solitary hero stands (or rather, bounces) against the forces of angled evil. Red Ball has reached the lair of the square opressors and now it's time to defeat the big boss and liberate the other balls. To do this, use the [arrow] keys and roll around, jump on enemies and negotiate obstacles. 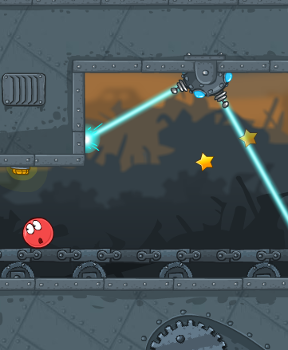 Don't let the cute graphics fool you, this platformer requires decent skills. Since the tone is sombre, as opposed to the happy atmosphere in Volume 2, the gameplay is altered accordingly. It's a lot less puzzle-y, choosing instead to rely on fast-paced action and quick reflexes. The grim industrial surroundings are the perfect backdrop for the introduction of many new elements, such as lasers, bombs and giant metal presses, all of which will kill you in a heartbeat. To counterbalance this, checkpoints are very nicely placed, allowing a smooth play without undue shouting at the screen. The controls are largely unchanged, which means you can keep a firm grasp on Red Ball and direct it exactly where you want it. Volume 3 is a very enjoyable game with one sad little flaw: with only fifteen short levels, it can be finished in no time at all (boss fight included). It's a good thing there are all the achievements to collect, though, so there's an excuse to play it at least once more.