One of the saddest things to hear is a young voice calling out for their beloved, missing puppy. What's even sadder is to find out all the puppies in your neighborhood have gone missing. But what tops all of that off is finding a delicious smell coming from your neighbor's house only to discover it's Puppy Stew! But hey, not to worry. Eva, your neighbor, is still in the process of cooking and all the pups are still yapping around. Now your witch of a neighbor (not an insult, she's an actual witch) is hankering for some puppy stew or some sweet tears of defeat from your other neighbor Vila. Vila is the Queen of the Witch Games, but for every minigame you defeat her in, Eva will release one of the puppies to you. This platformer by Justin Leingang is all about the minigames which vary from you stomping on poor squirrels, playing keep away, racing to the top of the highest tree, and many many more. Defeat Vila thirty times to gain all the puppies and become the Heroine of all dogs around. 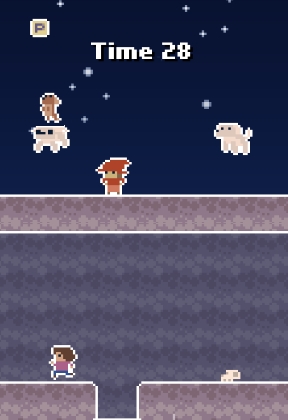 To win this game, you need to beat Vila at thirty of the forty games. While many of the game themes repeat, but have a high difficulty, you still have a choice of which ones you want to play in order to win. So if there is a type of game you're just no good at or can't stand, you can easily pass it by. All of the games are played with the [arrow] keys to move and [X] for jump. The [spacebar] is your select button, but it also calls your puppies to you or has them sit on command. When you free at least one you can then call them into the games and they can, at times, help you win by collecting things, or slowing down Vila. Your control for the pups are kind of limited as they will follow you, but only jump when there is something for them to jump over. The AI for Vila is pretty clever and some of the minigames feel more like a level of Kill the Plumber as you try to figure out the best way to stump her. For a game with such a disturbing premise Puppy Stew is actually 100% adorable from the witty rhymes of the witches to the growing herd of pups chasing after you. Plus with 30 sets of puppy eyes whining for help how could you pass up such a game?

I can't seem to "claim my prizes". I highlight the one I want and press SPACE, and nothing happens.

Apologies; I thought that I fixed that bug in the latest update. I'll look into it for you.

Actually, come to think of it, I need to make sure that you're playing the latest version. When you start up, at the "A video game by..." screen, is there a grey "v1.1" in the top-left corner?

...Well, it says 1.1, but I appear to have lost all my progress. Maybe the cookie didn't carry over with the update. I'll have to get back to you on whether or not the prize is downloadable.

Update-- I've re-earned the first prize and it's still not downloading. For the record, I'm using the latest version of Google Chrome on OS X El Capitan.

This game really needs a reset button. Especially on the race, I often know I've lost, but just have to wait around for things to finish out.

This game also really needs to stop pausing whenever I press a key that's not bound to anything. I sometimes bump the Z key when I'm trying to jump, and it would be nice if it could just ignore that instead of stopping everything cold.